BMW highlights its future-plans and uptake of e-mobility, and which EVs are heading to SA

• The Group aims to have more than one million electric vehicles on by the end of 2021.

The BMW Group is and remains a driving force behind individual mobility and is it the Group's ambition to achieve this in a responsible and sustainable fashion.

In 2018, the BMW Group delivered more than 140 000 electrified (pure electric and plug-in hybrids) vehicles to customers, while in 2019, a total of 145 815 electrified BMW and Mini vehicles were sold worldwide - an increase of 2.2% over the previous year. 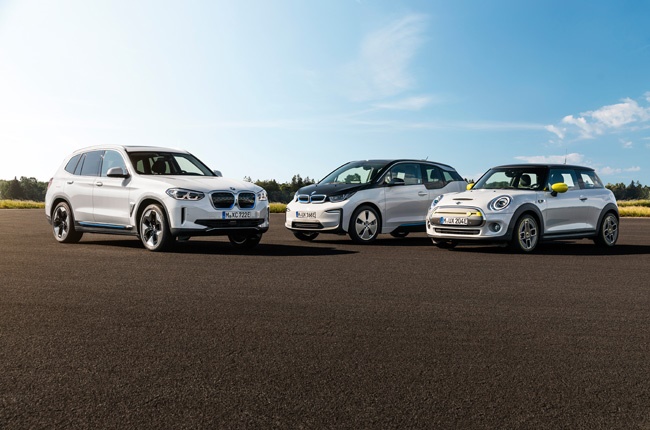 13 years in the making

Since 2007, the BMW Group have delivered EfficientDynamics with the goal to lower fuel consumption and reduce CO2 and other emissions from its vehicles. The BMW Group is focussed on electromobility, as well as clean and efficient combustion engines, and have already entered the second phase of its electromobility strategy. The Group says it is anchoring pure battery-electric mobility in its core brands and are committed to continuing in this direction.

The company will offer 25 electrified models by 2023. Of these, the line-up will feature a total of 13 all-electric models and 12 PHEVs (petrol-hybrid electric vehicles).

The BMW Group says it will continue to increase the number of electrified models across all brands and model series, including Rolls-Royce and BMW M. The following BMW plug-in hybrids are offered in South Africa: BMW X5 xDrive45e and BMW 745Le xDrive.

The BMW 545e xDrive, however, will not be made available locally. The BMW X3 will be the first vehicle it offers with all three powertrains: efficient internal combustion, plug-in hybrid, and full electric. From 2021, the new BMW i4 will be built at the BMW Group's Munich Plant, while their new technology flagship, the pure-electric BMW iNEXT, will be built at BMW Group Plant Dingolfing.

The BMW iNEXT will combine electric and Level 3 automated driving, high-end connectivity, and the interior of the future in a single vehicle for the first time; thereby creating a whole new experience of mobility, says BMW. The iNEXT will mark the launch of BMW's fifth-generation of electric drivetrains.

This drivetrain technology is based on a scalable modular system, which means that its technologies will also fit into models being launched today, allowing the BMW Group to electrify every model - partially or fully - in line with demand.

BMW says that it will rely on the flexible platforms, where customers can choose their drivetrain (full electric, plug-in hybrid, diesel or petrol) to suit their preference. Flexibility, not standalone electric platforms, will be the strategy for ramping up electromobility.

The BMW Group says: "Despite the effects of the current Covid-19 global pandemic on our business, we will continue driving the expansion of electromobility. Temporary closures of a number of our global production facilities to implement Covid-19 measures, including BMW Group Plant Rosslyn outside Pretoria, might affect the stated timelines.

"Our commitment to electromobility, however, remains steadfast." We live in a world where facts and fiction get blurred
In times of uncertainty you need journalism you can trust. For 14 free days, you can have access to a world of in-depth analyses, investigative journalism, top opinions and a range of features. Journalism strengthens democracy. Invest in the future today. Thereafter you will be billed R75 per month. You can cancel anytime and if you cancel within 14 days you won't be billed.
Subscribe to News24
Related Links
BMW introduces new 290kW/600Nm model to headline 5 Series hybrid range
WATCH | BMW plans to sell over 7m EV or PHEV systems by 2030
Next on Wheels24
PHOTOS | How Mercedes-Benz South Africa aims to avoid being powerless during load shedding