OPINION | Road transport should rapidly be decarbonised, but hydrogen is not the answer

Hydrogen has been touted as the fuel of the future, and the technology features prominently in the Morrison government's plan to reach net-zero emissions by 2050.

Earlier in 2021 the government unveiled its "future fuels" strategy to reduce emissions in the transport sector, committing A$250 million for battery electric vehicles and hydrogen infrastructure. And in September, it pledged almost A$500 million towards the Clean Hydrogen Industrial Hubs Program.

Decarbonising transport is crucial in the fight to limit global warming to 1.5? this century. We estimate the sector contributes about 20% of global emissions – like burning two Olympic-size swimming pools filled with fossil fuels per minute, every minute of the year.

But as independent researchers in transport emissions and energy, we believe the focus on hydrogen in road transport is misplaced. Projections show if all nations’ 2030 emissions reductions targets are met, the planet will be on track to heat by a catastrophic 2.4?. In this pressing need to rapidly reduce global emissions before 2030, developing hydrogen for low-emissions road transport won't happen fast enough, and it doesn't pose a viable alternative to electric vehicles.

Hydrogen in a nutshell

Hydrogen is already an important part of the global economy, including for the production of fertilisers and in oil refining. The federal government has identified hydrogen as a priority low emissions technology to develop further, with a focus on hydrogen refuelling infrastructure for major freight routes and passenger road corridors.

Almost all hydrogen today is produced using fossil fuels (natural gas and coal), and this accounts for about 2% of global emissions. Hydrogen is clean and climate friendly only if it's produced from renewable sources of energy, such as solar, wind and hydro. This process uses electrolysis to convert water into hydrogen, and is aptly called "green hydrogen".

For more than 20 years, proponents of hydrogen have been promising a future of clean energy. But while the pace of new green hydrogen projects is accelerating, most are still at an early stage of development. Just 14 major projects worldwide started construction in 2020, while 34 are at a study or memorandum of understanding stage.

Developing hydrogen technology is, indeed, important outside of the road transport sector, with promising options such as green steel which will reduce emissions and bring new Australian jobs. But we’re not betting on hydrogen for road transport

The Honda Clarity hydrogen fuel cell vehicle, for example, ceased production in August 2021 to “trim underperforming models from its line-up”. Some manufacturers are even lobbying for a faster transition to electric cars.

Hydrogen may play a larger role in the long-haul truck market, as its stated benefits include a long drive range and short refuelling times, which are important for this sector.

But hydrogen competes with a dynamic and fast-moving electric truck market, which shows significant and continuous annual improvements in battery energy density, and prices. What’s more, truck makers – such as Daimler, MAN, Renault, Scania and Volvo – have indicated they see an all-electric future.

The often-stated benefits of hydrogen dissipate when compared with alternative electric truck technology. This includes battery swapping, which allows for short refuelling times, and the development of e-highways (roads that automatically recharge vehicles when they drive along it).

While it's true these systems are still being tested in, for instance, Europe and the US, they have a promising outlook. For example, in July the UK government announced £2 million (A$3.66 million) to design overhead charging cables that would power electric lorries on a motorway.

Likewise, the battery swapping network in China already dwarfs the hydrogen refuelling network, although the system is still in its infancy. 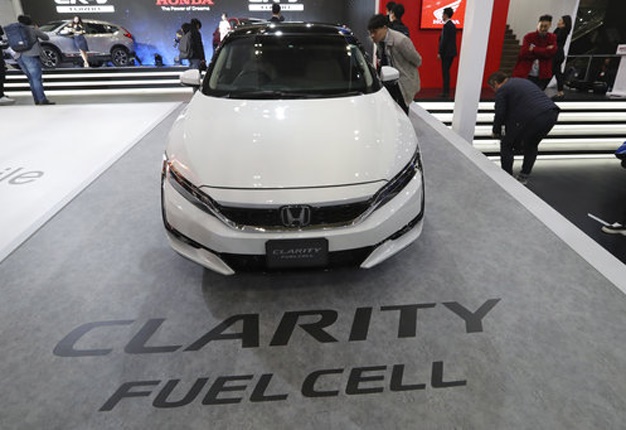 Hydrogen fuel cell cars could one day challenge electric cars in the race for pollution-free roads but only if more stations are built to fuel them.
AP Lee Jin-Man

An overlooked but fundamental issue with using hydrogen in transport is its low energy efficiency. Hydrogen is not an energy source, it is an energy carrier. This means it needs to be generated, compressed or liquefied, transported and converted back into useful energy – and each step of the process incurs a substantial energy loss.

In other words, the amount of renewable energy required for a green hydrogen vehicle to drive one kilometre is the same as what's required for three electric vehicles to drive the same distance.

This is a very important issue. The more energy required for transport, the more renewable energy needs to be generated, and the higher the cost and more difficult it becomes to decarbonise the economy rapidly and at scale.

There are three other, perhaps less well known, issues with hydrogen we believe should be seriously considered.

First, the potential for significant leakage of hydrogen during production, transport and use. Hydrogen is a more potent greenhouse gas than carbon dioxide, and any loss of hydrogen reduces the overall energy efficiency.

Second, hydrogen emissions from leakage may add to local and regional air pollution, and may even deplete the ozone layer in the stratosphere, but further research is needed in this space.

And finally, hydrogen needs clean fresh water, and lots of it. A single hydrogen fuel cell car requires about 9 litres of clean, demineralized water for every 100km driven. For a large truck, this would be over 50 litres per kilometre.

If sea water and desalination plants were used to produce the water, another energy loss would be added to the production process, penalising overall energy efficiency even further.

Decarbonising road transport needs to be rapid, deployed at scale, and requires a holistic strategy that promotes shifts in everyday travel behaviour. Betting on the future large-scale availability of hydrogen for this sector won't see this happen fast enough. It also risks locking in fossil-fuel dependency, and its additional greenhouse gas emissions, if upscaling clean hydrogen falls short of expectations.

We need to minimise energy demand and improve energy efficiency in transport as much as possible and as fast as possible. The available evidence suggests battery electric vehicles are the only feasible technology that can achieve this in the near future.

For a rapid reduction in greenhouse gas emissions, we should electrify transport where we can, and use other options like green hydrogen where we genuinely can't, such as long-range shipping and aviation. And depending on how truck electrification efforts develop, hydrogen may still have a role in long-haul trucking, but it will use a lot of extra renewable energy.

A logical first step is to convert the current global production of fossil-fuel based hydrogen to green hydrogen. But the focus must be on rolling out electric vehicles across Australia and, indeed, the world.

The authors are grateful for the discussions with and contributions made by Professor Eckard Helmers (University of Applied Sciences Trier, Germany) and Dr Paul Walker (University of Technology Sydney).

We live in a world where facts and fiction get blurred
In times of uncertainty you need journalism you can trust. For 14 free days, you can have access to a world of in-depth analyses, investigative journalism, top opinions and a range of features. Journalism strengthens democracy. Invest in the future today. Thereafter you will be billed R75 per month. You can cancel anytime and if you cancel within 14 days you won't be billed.
Subscribe to News24
Next on Wheels24
Return of the ///Mack: The BMW CSL is back and only 15 units are coming to SA