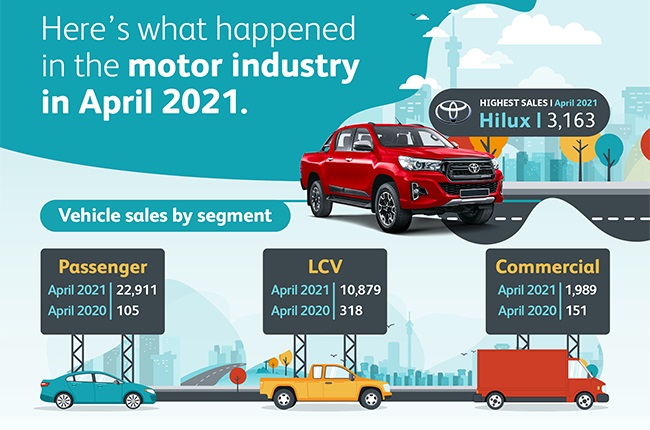 April new vehicle sales told an inspiring story of the South African motor industry's resilience while also providing a harsh reminder of the bleak outlook experienced a year ago. With April 2020 sales essentially at a standstill as motor retailers stood closed, the rejuvenated picture a year later, while certainly reassuring, remains under pressure.

In percentage growth terms, the sales dam was over-flowing while the floodgates couldn't keep up. According to Naamsa, the Automotive Business Council, the new vehicle market grew 6133.3% in April compared to April last year. However, the reality was a little more subdued when considering that April's 35 779 sales were 17.6% lower than last month - 7649 units less than March.

Within the context of lockdown, April sales are difficult to interpret. On balance, April sales lost less against March than March sales had gained against February, meaning the market remains in its state of slow recovery. March sales had increased 18.4% over February.

Do you think the local motor industry can return to strong sales figures post-Covid-19? Email us or use the comment section below. Sales during April will also have been impacted by the numerous public holidays, providing fewer selling days during the month. However, reassuringly, sales during the first four months of the year remain 28.3% ahead of the corresponding period last year. This is as a result of April volumes measured against the 574 sales recorded in April last year. Within this context, first quarter 2021 sales were 0.9% lower than 2020.

The passenger car segment sold 22 911 units during April, 86.2% of which were retailed through dealers to consumers. Dealer channel sales were relatively robust and are 27.3% ahead year-to-date. The segment was 13.9% down on March sales.

Demand in the new vehicle market remains high, as judged by WesBank's daily application rate. While WesBank continues to finance more than twice the number of pre-owned vehicles than new, there is a marginal shift towards new car sales as experienced during April.

Lebogang Gaoaketse is the head of Marketing and Communication at WesBank Vehicle and Asset Finance.

We live in a world where facts and fiction get blurred
In times of uncertainty you need journalism you can trust. For only R75 per month, you have access to a world of in-depth analyses, investigative journalism, top opinions and a range of features. Journalism strengthens democracy. Invest in the future today.
Subscribe to News24
Next on Wheels24
SA car sales | Here's how many vehicles Jaguar Land Rover sold in July