• A second-hand McLaren Senna is listed on the AutoTrader website.

• The Senna is one of only, and the only one currently on sale in South Africa.

Stop the press, because a McLaren Senna went up on AutoTrader's classifieds section. The Senna is one of the fastest cars ever made - not only by McLaren but in automotive history. For its production run, McLaren announced that only 500 units would be built, of which all 500 were sold out in virtually the blink of an eye.

In terms of the car's warranty, the listing says that there are still 32 months remaining. The interior is finished in Azura Blue Alcantara with a satin carbon fibre interior finish. To strap yourself in, occupants must make use of the six-point harness.

For the full detail on the listed Senna, click here. The Senna is an ode legendary Formula 1 driver, Ayrton Senna. The Brazilian drove for the McLaren team in the late 1980s and early 1990s, winning three driver's championships. To remember the driver and his accomplishments, the automaker produced the Senna.

With a dry weight of just 1198kg (1309kg kerb weight), the Senna can clear the 0-100km/h sprint in only 2.8 seconds, with 200km/h cleared from standstill four seconds later. Top speed is rated at 335km/h. The rear-wheel driven sports car is powered by a turbocharged 4.0-litre V8 engine that produces 588kW and 800Nm. The power is available at a heady 7250rpm, while maximum torque kicks in at 5500rpm. Power is sent to the rears via a seven-speed dual-clutch transmission. 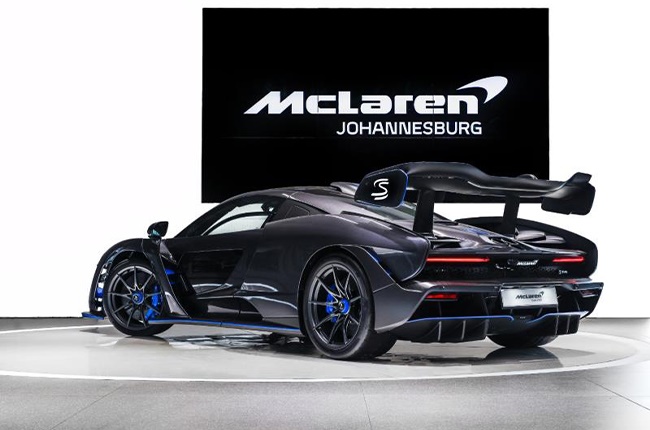 2020 McLaren Senna
Supplied AutoTrader
We live in a world where facts and fiction get blurred
In times of uncertainty you need journalism you can trust. For 14 free days, you can have access to a world of in-depth analyses, investigative journalism, top opinions and a range of features. Journalism strengthens democracy. Invest in the future today. Thereafter you will be billed R75 per month. You can cancel anytime and if you cancel within 14 days you won't be billed.
Subscribe to News24
Related Links
Throwback Review | Piloting McLaren's 'baby' 570s Spider is a raw and visceral experience
F1, MP4-12C, hardcore McLaren Senna... here's all you need to know about Britain's most iconic...
Next on Life
Looking for a pre-owned car? These offerings below R50 000 from unfamiliar brands are worth considering