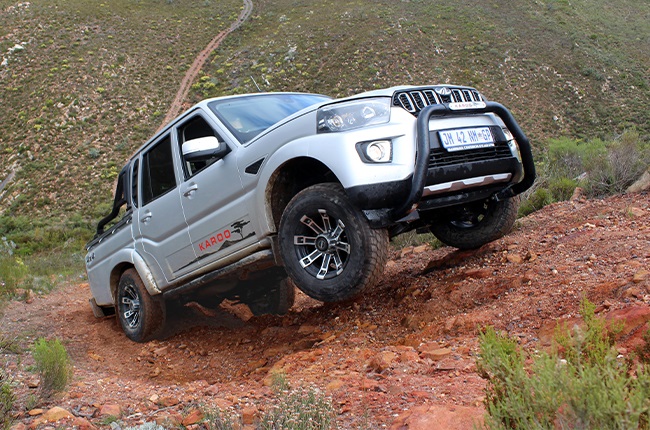 • All the trails combined, the Bonniedale 4x4 tracks covers a total of 35km.

As Annette and I set off in the Mahindra S11 4x4 Auto DC Karoo Pik Up, I'm a little concerned I may have the wrong vehicle for the task at hand. It's not that I don't have confidence in this rugged bakkie - I took it way beyond its 'spec' limits at Elandskloof last year - but we're visiting one of the most exacting 4x4 destinations in the Western Cape, designed by Nico Hestermann, one of SA's pioneers of the craft.

On my first visit to Bonniedale Farm ten years back, I made the journey in my venerable W123 Merc, so I relied on Nico to take me on a few of the 4x4 tracks in his bespoke old Hilux. It was on the nerve-wracking climb to Sun Bird Camp, clawing our way up a perilous slope, that I realised this was no ordinary 4x4 destination.

WATCH: Why Suzuki's all-climbing Jimny is ideal to explore shipwrecks on the Skeleton Coast

On that first and subsequent visits, I also garnered knowledge of the great historical significance this quintessential holiday farm holds. It has numerous San Rock Art sites, the Attaqua Khoi moved here from the modern-day Hemel-en-Aarde valley outside Hermanus; Ensign Schryver discovered the old elephant road through the farm in 1689; the grave site of the murderous Bloubaard Swanepoel is a short distance from the farm's eastern border, as is an old English fort which reminds one of the British-Boer conflicts of yesteryear.

Having spent the night in my favourite caravan on the hilltop overlooking the Woeska Wagon Trail, Annette and I head off to pick up Nico at the farmstead. Even though I'm now a veteran of some 40 4x4 tracks, Nico has around 20 years of experience on me and is also a 4x4 instructor, so I'm hoping I'll live up to his high standards. But he's one of the coolest customers I know, and not long after we start the Goliat's Berg trail, we settle into a comfortable dialogue of sign language and grunts of acknowledgement and alarm that sees us wind up the scree and rock slope amicably. It's only when I get too close to Annette - she's lying on the track taking photos - that he becomes a bit edgy.

A while later, Nico points out a rare protea that is only found at a specific altitude. It's the Paranomus Longicaulis, a sighting that would have passed us by had we not had Nico with us. On a previous drive with him, I learned that specific groupings of flora, specifically bitou, kiepersol, and camphor bushes, often indicate past San settlements, a fact borne out by the fascinating rock-art we saw in a cave close-by.

READ: 4x4 Trail | You don't need the range-topping Ford bakkie to get to the top of the hill

A couple of kilometres into the drive, things get more challenging. The scree slopes get steeper; the turns get sharper (something the Mahindra's wide turning circle doesn't cope with too well), and the ruts deeper. But nothing quite prepares me for the mother of all steep boulder and scree descents a little further on. With the bakkie in low range (first, held manually in 'Tiptronic' mode) and Nico suggesting a line down the heavily donga-ed precipice, we descend the axle-twisting slope, the back wheels alternating in space as we go. Amazingly, the Pik Up's relatively low ground clearance (210mm) doesn't lead to any protests from down under, but I'm still grateful the vehicle is equipped with rock sliders.

On the other side of the kloof, I see what appears to be a 35-40-degree soil and scree ascent, pockmarked with dongas and a sharp right-hand turn. With the Mahindra's Mechanically Locking Differential, you need to make sure you've got decent momentum because it only kicks in once one of the wheels spins a fair amount - a bit unnerving at first. But even with this slight grip lag and one of our front wheels airborne, we shimmy our way upwards. 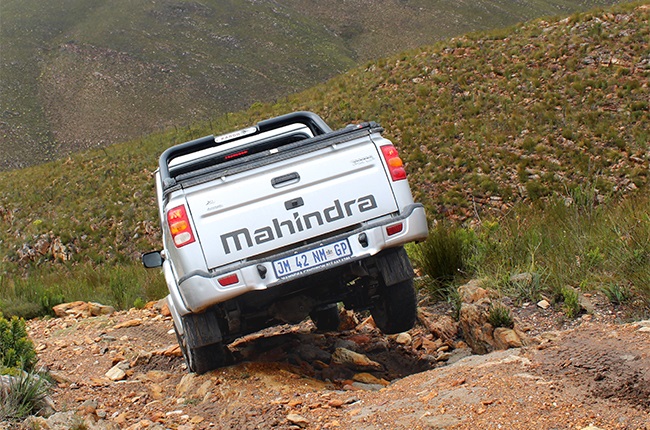 At the view-site at the top of Klipbokberg, we sip coffee and take in the exquisite views over the farm and are not surprised when Nico tells us he wants to build his 'aftree' cottage at this location one day. From here, we head back down the mountain and take a right onto the Bymans track, the steep exit of which I've always admired from the farm's approach road.

The few kilometres of easting take us uphill and down dale, through marvellous fynbos country. Nico points out some flowering Honeybush from which his wife, Dannette, makes her renowned tea, and then a herd of Grey Rhebok breaks cover, bounding up a ridge to our right. With the distant bark of baboons in our ears, we amble down the steep exit slope, ably assisted by the effective and non-grabby Hill Descent Control fitted to the Pik-Up.

The historical Ox Wagon Trail is why most historically-inclined adventurers come here. As mentioned earlier, the first European explorer to pioneer a way through the Attakwasberge was the indefatigable Ensign Schryver. On his way to barter with the Chief Hykon of the Inquas near present-day Aberdeen, it apparently took him and his party seven days - out of a total of 39 days, one way - to cross the Cape fold mountains.

On the other hand, we have only a few hours to experience the 'roads' that challenged the 12 or so wagons that came through here daily in the 17th and 18th centuries, before the Montagu Pass was completed in 1848 and the Robinson Pass in 1869. The first steep rocky climb after the lengthy - but not too deep - river crossing looks more daunting than it is. In first gear with low range engaged, the Mahindra crawls up the rutted slope with consummate ease, and soon we were onto the comparatively cushy section that leads us to the old Toll House. Back in the days of yore, when Bonniedale's farm owner was responsible for maintaining the wagon track section passing through his farm, the toll fees were equitably split between him and the authorities. Until 2017, Nico had a similar arrangement with Cape Nature until they arbitrarily closed the continuation of the trail to the Robinson Pass.

With this route closed off to us, Nico announces that based on his assessment of my driving thus far, he thinks I'm ready for some more extreme stuff. He indicates that I turn right, and we soon cascade down another steep scree slope with intermittent boulders and ruts.

READ: RoadTrip | In search of the 'Great Wall of Mzansi' in the Chinese-built GWM P Series bakkie

Following some sheer descents, we are discharged into a narrow verdant valley. On the other side of a short river crossing lies the rustic Footloose Camp, but there's, unfortunately, no time to dally here in its alluring shade, and we hook a right up a seriously angled rocky ascent instead. By now, I'm used to the idiosyncrasies of the Mahindra's sometimes hesitant Mechanical Locking Diff and keep the power on as we buck and sway up on over the rise.

After a kilometre or so, we come out a short distance from where we started, and Nico points out a large cleft in the mountainside ahead - apparently, it houses next-level rock-art depicting the San's vision of man's 'evolutionary' journey.

Ambling home back down the Ox Wagon Trail, we catch sight of the extreme climb out of the Honeykloof to the west, but it's a bridge too far for our tamely-treaded AT tyres. Besides, we've already enjoyed over 20km of exacting trails and epic scenery; it's now time to have another languid lunch on the stoep outside my favourite caravan. 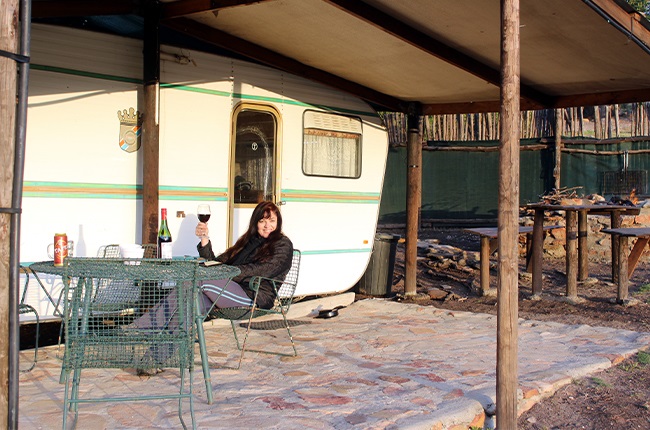 Trail stats: There are a number of different trails (Grade 3-4) comprising some 35km.

Time taken: To do them all will take the better part of a full day.

Terrain: Steep mountainous trails comprising boulders; rock; scree slopes; a mixture of sand and grit; a few water crossings (only one of any significance) and some gravel.

Tyre Pressure recommended: I ran ours at 1.7 bars in front and 1.8 bars at the back.

Ground clearance: A minimum of 210mm is recommended.

Solid workhorse for the farm (handles well on dirt tracks, even when 'unloaded') and comfortable enough in the city, too

Mechanical Diff-lock requires too much wheel spin before kicking in

Low positioning of infotainment screen and other buttons

Costs: R250 per vehicle and use of braai area/picnic facilities: R50 per person.

We live in a world where facts and fiction get blurred
In times of uncertainty you need journalism you can trust. For only R75 per month, you have access to a world of in-depth analyses, investigative journalism, top opinions and a range of features. Journalism strengthens democracy. Invest in the future today.
Subscribe to News24
Next on Wheels24
OPINION | Ford's Ranger Raptor: the harder you drive it, the more rewarding it feels