A gang of Jimnys on safari in Botswana.j
Calvin Fisher

Wheels24 contributor Calvin Fisher gets blown away by the little Suzuki Jimny's prowess through Botswana on a safari trip.

We touched down in Maun, Botswana, on a blistering Thursday morning. We poured our overheated selves into the cool cabins of a fleet of freshly prepared Suzuki Jimnys, their thermostats registering a 39 degree Celsius ambient temperature.

Our complimentary water bottles were useless for consumption; they were hot. Like, drop in a sachet of coffee, and you'd have a decent Americano, hot. Ahead of us lay a 400km adventure spanning Botswana and Zambia, but first, we needed to leave the Maun Airport. Tick, tick, tick went the indicator, I dipped the clutch and engaged first gear on the 5-speed box, and we were off. Over the next four days, we'd put rubber on the tarmac for an hour or two, but the bulk of our driving would be conducted on gravel and sand. Much of the prior was corrugated, and plenty of the latter would be thick and soft. Thankfully, we'd be at the helm of a 4x4 so capable; despite its tiny footprint and unassuming demeanour, it's practically a meme.

Out in the wild, the Suzuki Jimny is a force. Armed with a 'mere' naturally aspirated 1.5-litre engine and brandishing just 75kW and 130Nm - it typically battles against much larger, more serious machinery. It does this with ease, thanks to its superpower. It is tremendously light of foot, at 1075kg. Ok, with my partner and I, and our luggage included, that number goes up somewhat but lowering the tyre pressures to one bar remedies the situation.

From Maun, we took the tarmac to Shorobe, then onto the dirt to Mababe. We navigated via the control gate lanes and cut lines through the conservation area, where we would ultimately camp that first night. Here, under the stars and filled with steak and bread, our senses heightened by moer koffie, we camped to the sounds of hippos, hyenas, crocodiles, and heaven knows what else. This was wild camping, which meant no fences, no separation from nature. You'd think that would make for a poor night's rest, but after spending hours on the road, we were exhausted. Sleep came quickly. A cabin in Botswana's bush. Just some hippos in the water
Wheels24 Calvin Fisher An elephant comes to say right outside the Suzuki camp.
Wheels24 Calvin Fisher

The next day we clambered back into our Jimnys and proceeded on a game drive along the Khwai and Mababe Rivers. From the comfort of our cabin, we saw elephants, giraffes, zebra, crocs and an array of bucks of all sizes and descriptions. Later that evening, as we made our way back to camp, we had the rare privilege of spotting three lionesses on the prowl. That they'd be out hunting just 700m from our tent is not ideal. But certainly invigorating.

The following day we crawled through the Chobe National Park, then crossed the Mogadishu sand river on route to the Savuti camps via the Savuti marsh. The treacle-like sand wasn't a match for the Jimny, which at this point was still in 4H (four-wheel high). 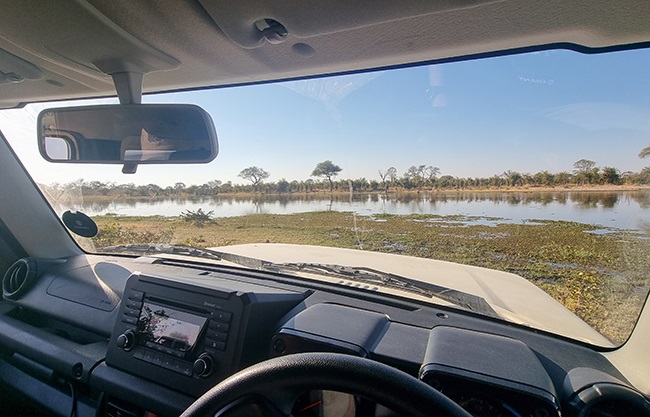 The Suzuki Jimny proves to be a capable SUV despite its size.
Wheels24 Calvin Fisher

This was our third day in the wild, witnessing beasts of all sorts, from the crocs mentioned above to troops of baboons and more. The temperature gauge hovered around 36 degrees Celsius, but in our Jimny, we were sitting at a pleasant 18 degrees Celsius. It's not particularly large, this cabin - but certainly not cramped. Suzuki does a great job of packing big spaces inside little cars, and it's no different here. It was filled as it was with biltong, sweets and snacks in addition to our luggage. Finally, we exited at Goga gate and made our way to Mwandi View lodge and campsite. This would be our final evening in Botswana, with the following day reserved for crossing the border into Zambia and, with it, our flight back home. All on tar, and so all without consequence. Upon reflection around a warm campfire, under a sea of stars in a sky painted purple and orange, I'd have to say I'm blown away. We travelled to places you'd normally expect to need a much larger 4x4. It'd typically be kitted to the hilt with lift kits, brimming roof racks, and the accompanying equipment one feels the need to pack on a mission through Africa. Yet here we were, a jumble of Jimnys scything our way through Mother nature's backyard. We've come away impressed and rekindled.

I've said this often, and I'll repeat it now. Travel, and travel lots, but start in Africa.

We live in a world where facts and fiction get blurred
In times of uncertainty you need journalism you can trust. For 14 free days, you can have access to a world of in-depth analyses, investigative journalism, top opinions and a range of features. Journalism strengthens democracy. Invest in the future today. Thereafter you will be billed R75 per month. You can cancel anytime and if you cancel within 14 days you won't be billed.
Subscribe to News24
Next on Life
OPINION | Have Porsche, will camp: How to keep your SUV overlanding fit