• The GWM P Series was used for the undertaking and successfully completed the 1 400km trip.

• The team came close to the wall, but was stopped by SANDF from proceeding to the wall.

Follow @Wheels24
Did you know that South Africa also has a Great Wall? Yes, we do - on the border with Mozambique near Kosi Bay, and we visited it (well, sort of) in the new Great Wall Motors (GWM) P Series bakkie. It was an eventful trip, but The Great Wall of Mzansi proved elusive.
Ferdi de Vos, RoadTrip editor

Named after the Great Wall of China, the vehicle manufacturer GWM is the largest producer of sport-utility vehicles (SUVs) and pickup trucks in China, selling passenger cars and bakkies under the Great Wall brand and SUVs under the Haval and WEY trademarks.

However, with the Steed 6 as the benchmark, we were still somewhat sceptical of the abilities of the P Series - more so as Haval South Africa viewed it as a serious contender to the main protagonists in the one-ton bakkie market: the Hilux, Ranger, D-Max, Navara, Triton, BT-50, and the likes.

So, to ascertain its proficiencies, we decided to take it on an extended road trip on divergent terrain, but where to?

Well, with South Africa in the process of erecting its own Great Wall - the so-called (and quite controversial) Jersey Barrier Wall Project - along the border between Mozambique and Northern KwaZulu-Natal, it just made sense to take the new Great Wall bakkie there.

The Jersey Barrier Wall Project (also called the Kosi Bay Barrier Wall) was conceived to address cross-border crime between the uMkhanyakude District and Mozambique. The decision to erect the wall came in response to community complaints since 2016 that this part of the border has become a focal point for crime, including smuggling and transporting stolen vehicles from South Africa into Mozambique.

The project - consisting of three phases to eventually cover 25km of the national border - started in 2019, and the first phase of 8km, moving West toward Tembe Elephant Park to cover the principal crime hotspots, was supposed to be completed late last year.

The undertaking is minuscule compared to the Great Wall of China, one of the seven wonders of the world, with wall sections, ramparts, buildings, and fortifications spanning a total length of 21 196km. Just the Ming dynasty section (the most famous part of the wall) measures 8 850km in total.

The R85 million South African Wall project ran into innumerable problems (including the pandemic regulations and being probed by the Special Investigating Unit on allegations of corruption and maladministration). And at the time of writing, it would seem only about 90% of Phase One has been completed.

Our quest to find The Wall started at the Haval East Rand dealership in Edenvale where we took delivery of a range-topping P Series 2.0-litre turbodiesel LT 4×4. The massive chrome grille of the new Chinese pickup immediately commanded attention, and its entirely new and attractive design harbours no leftovers from the Steed range.

Also, we found the roomy cabin - a cheap plastic party in GWMs of yore - surprisingly well put together, luxurious (with neat stitching on the leather seats), and ergonomically well laid out. Additionally, GWM has thrown in everything that opens and closes as standard, and one did not get the impression this bakkie is anything between R50k and R100k cheaper than most of its competitors.

It has speed control with radar remote control, a lane-keeping feature, blind spot warning, distance warning, and more. However, having learnt from previous encounters with Haval/GWM vehicles, we quickly switched off the over-enthusiastic and intrusive lane departure and stability control systems.

Apple CarPlay and Android Auto compatibility are standard, but the P Series's infotainment system proved somewhat erratic, refusing to connect every so often. Even so, we managed to set a route for Jozini, following the N17 highway towards Ermelo. Powered by an upgraded version of the 2.0-litre direct injection turbodiesel engine used in the Steed, the new GWM double cab still displayed some turbo lag under acceleration. But coupled with a new ZF eight-speed auto transmission, it was far less pronounced than its predecessor.

With 120kW and a useful 400Nm of torque on tap, the combination of engine and gearbox (with eco, standard, and sport modes) worked well, and even in standard mode, overtaking was a breeze on the busy national road. Sport mode delivered significantly more spirited performance, while fuel consumption - even at a quite high average speed - hovered around the 11-litres/100km mark.

About halfway towards Ermelo, a warning light started flashing on the instrument display, indicating some issue with the exhaust emissions. Not knowing the problem, we stopped at the Haval dealership in Ermelo to get it checked. According to the technicians, the warning was for an interrupted emissions recycling programme, and it was nothing to worry about.

They reset the engine management system, and the light disappeared (however, it did flash again during our trip, just to vanish again – presumably when the recycle procedure was completed). From Ermelo, we stayed on the N2, following a train of trucks through Piet Retief and the densely populated areas of Rosendal, Mkhwakwheni, and Pongola before turning off on the P522 towards Jozini.

The P Series displayed good torque characteristics up the series of s-bends following the outline of the Pongola Dam. From Jozini, we followed the road across the Northern KwaZulu-Natal floodplains leading towards Manguzi and our overnight accommodation at Kosi Bay Casitas, close to the iSimangaliso Wetland Park. At the lodge, we were warmly welcomed by owner Ray Jackson and manager Johdi O'Brien, and after finding our cabin, we enjoyed a delicious meal at the on-site restaurant. Over dinner, we asked them about the border wall, but they did not know much about it - to our surprise. However, as we did not have a precise reference point, they suggested we start our search from the Kosi Bay border post.

After a real Mozambiquan breakfast the following day, we left for the border post. The GWM handled the rutted, sandy roads with ease, and we soon arrived at the border. We asked some of the border guards for directions to the wall, but our inquiries were met with blank stares. They seemingly did not know where it was and suggested we speak to the police commander in Manguzi.

We duly drove to Manguzi (about 20km from the border post) but could not find the police office (as we would later find out, it was situated in a prefab building behind the new police station that was still under construction). Hence, we pushed on towards KwaNdaba, West of the Tembe Elephant Park, to see if we could find a road there that leads to the wall.

We turned off on to a rough dirt road leading North past the Ndumo Game Reserve and soon reached the border, but no wall - only a single fence-line guarded by a small detachment of SANDF soldiers. They also did not know any wall, so we decided to drive to the nearby reserve. Perhaps the rangers would know where the elusive wall was.

With a torque-on-demand all-wheel-drive system (developed by Borg-Warner), our top-spec bakkie felt quite at home on the narrow sand and gravel roads leading towards Ndumo, but with no load on the back and wide road-biased tyres, its ride was somewhat bouncy over the numerous ruts. At the reserve (closed at the time due to Covid-regulations), the ranger on duty knew about the wall but did not know its whereabouts and referred us back to the SAPS in Manguzi. So, we retraced our 18-inch tyre tracks towards the town, and this time, we found the station.

The policemen on duty were obliging, and soon we had clearance (and an escort) to go to "Gate Six", where construction of the wall was in progress. By now, we have wasted virtually the whole day in our efforts to find it, so we were elated to be on the right route at last.

However, things were about to turn for the worse.

The track leading to the wall was bumpy and rutted, churned out by the tyres of big trucks, but the GWM easily kept up with our police escort's bakkie. Then, the bakkie suddenly turned off the track, and about 500m further stopped at a temporary army base. "Here our jurisdiction stops," said the one policeman, "Now you are in the hands of the SANDF."

Well, this ended our quest right there. Less than 200m from The Wall, as the officer in charge of the army detachment would not allow us to go further without higher permission. Now, having seen this movie before, we realised we were stonewalled.

Without go-ahead directly from Defence Force HQ in Pretoria, there was no way we would be allowed closer. And the fact that we were in a hijacking hotspot with a prominent red, brand new bakkie probably also did not help our cause.

So close, yet so far, but at least we got a glimpse of it. According to the latest information, the first 8km phase - with 6 100 Jersey barriers installed by 36 local sub-contractors under auspices of the ISF Group -should be completed by next month.

When (and if) the full 25km of the controversial barrier will be completed, remains an open question. You can watch the video on progress with the building of the wall here. We returned to Kosi Bay Casitas after our (unsuccessful) excursion and the following day visited the iSimangaliso Wetland Park with its unique fish traps and beautiful scenery. Here the 232mm ground clearance of the P Series, its 360-degree camera, 4L setting (with access to Cross Country Expert Mode), and hill-descent control came in handy, and its performance in the sand was more than adequate.

Apart from its sizeable load bed, our GWM was equipped with a built-in step in the tailgate (an R12 892 option, excluding VAT). With gas struts, the tailgate requires less effort to open and close. The Chinese bakkie also offers good legroom for rear passengers and more storage space than most of its competitors.

While we did not completely achieve our objective, our 1 400km round trip did show the P Series represent a giant leap forward for GWM. The LT is comfortable and generously equipped, and there is no leisure double cab at this price that offers so much value. 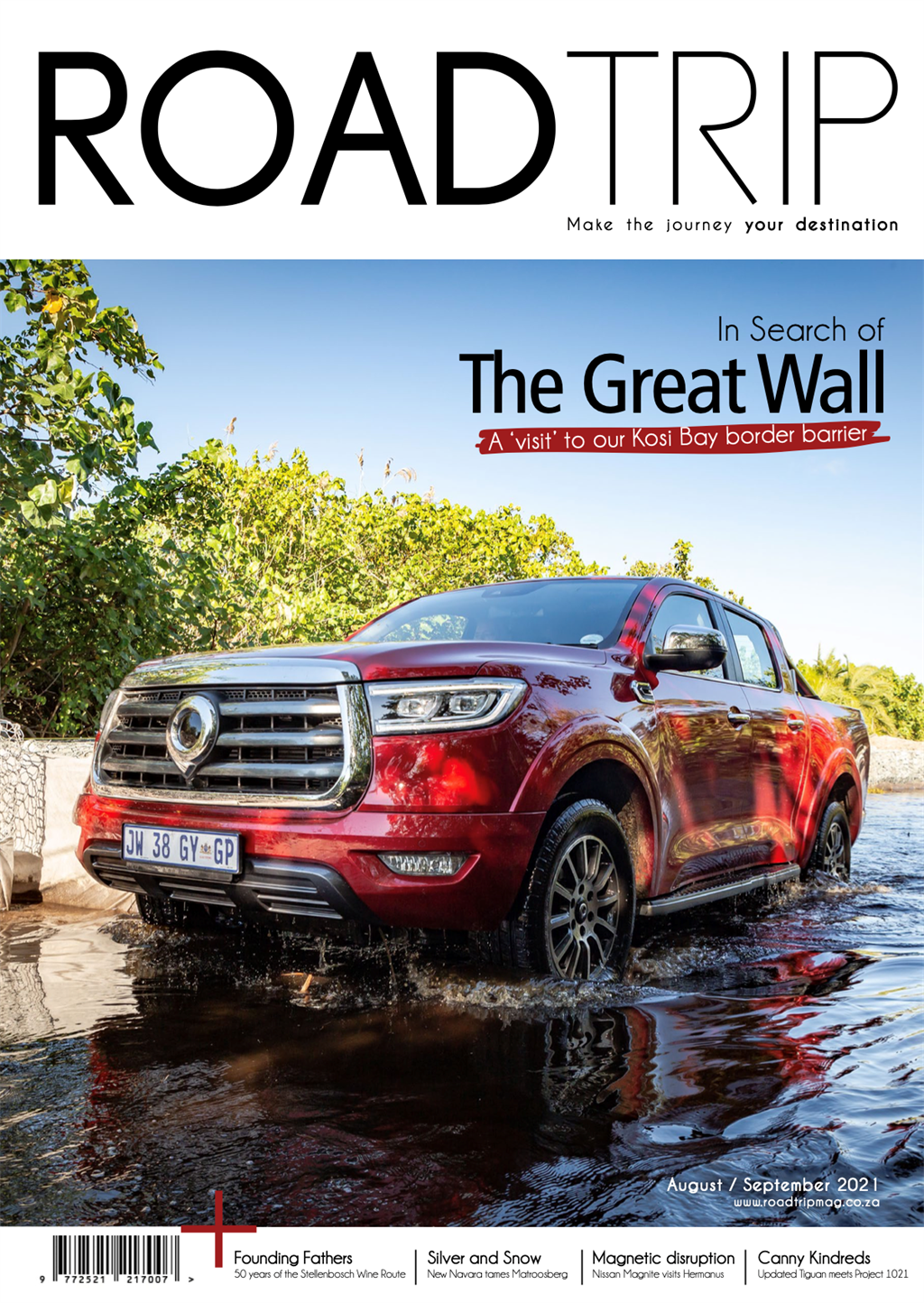 We live in a world where facts and fiction get blurred
In times of uncertainty you need journalism you can trust. For only R75 per month, you have access to a world of in-depth analyses, investigative journalism, top opinions and a range of features. Journalism strengthens democracy. Invest in the future today.
Subscribe to News24
Next on Wheels24
4x4 Trail | How Toyota's latest Fortuner 2.8 GD-6 4x4 beat a daunting Matroosberg

Subscribe to newsletters
Lockdown For
DAYS
HRS
MINS
Brought to you by
Voting Booth
Who do you feel was at fault for Verstappen and Hamilton's Italian GP crash?
Please select an option Oops! Something went wrong, please try again later.
Verstappen
25% - 1212 votes
Hamilton
42% - 2029 votes
They were both at fault
33% - 1583 votes
Previous Results
Car Doctor
WATCH | How to protect yourself from buying a water-damaged used car