• The inaugural Suzuki Safari took place in the Northern Cape.

• The four-day excursion included wild camping next to the Orange River and visiting shipwrecks.

• The Suzuki Jimny was the vehicle of choice and performed impeccably throughout.

How does one celebrate an automotive icon? Sure, you can launch a special edition version or a limited-number model, but that won't bring the message home - proverbially speaking. It's in such times, then, that you must go back to the basics and revisit the essentials of what made said car an icon.

The Suzuki Jimny has been around since 1970, with only four generations have seen the light. The third generation did duty between 1998 and 2018 - 20 years! - before this all-new model replaced it. Three years later, the Jimny is still as popular as ever, with the South African waiting list just as strong as it was when the little rock climber was launched.

Still, how does one celebrate an icon like the Jimny? But more importantly, said celebration must be in line with the Jimny's ethos and character.

Under the watchful eye of @africanex4x4, the #SuzukiSafari went by without a hitch. Exploring parts of the Northern Cape in the capable @Suzuki_ZA Jimny was an absolute treat and it shed light on a vehicle that's been impressing since 1970. #BecauseJimny
?? @ChrisWallMedia pic.twitter.com/sYhDVaBxSX

Earlier this year, adventurist and South African travel expert Johann du Toit, and his son, Justin, chatted about possibly 'retiring' their trusted Toyota Land Cruiser from non-hardcore touring duties. The Cruiser, says the Du Toits, is a fully kitted off-road beast that can scale almost any obstacle in its way. However, while impressive, it often intimidates customers attending the self-drive 4x4 excursions hosted by their travel company, African Expeditions.

Justin then approached his father with the option of acquiring a Jimny, to which Du Toit sr. responded: "If I can fit in it, I'll consider it." Johann says that within 50m of driving the Jimny, he knew that it would be their next 4x4 and immediately placed an order for one. The Du Toits took delivery of their Jimny 1.5 GLX AllGrip on a Friday afternoon in July 2021 and readied it for a trip to the Kalahari the very next day. To date, their Jimny has covered more than 30 000km!

Johann, immensely impressed by what the Jimny had done on another successful expedition, reached out to his local dealer with a proposition, who, in turn, got him in touch with Suzuki South Africa. The national team bought into Johann's concept of a Suzuki Safari using a few Jimnys. The idea is simple: drive a 4x4 route that involves sand, dune, gravel, and rock driving - everything that would celebrate Jimny.

The inaugural Suzuki Safari would take place in the Northern Cape, covering the Boesmanland, Namakwaland, and the Shipwreck Route between Koingnaas and Kleinsee at the coast. Camping under the stars

The Du Toits are an adventurous bunch, and their spirit for adventure shone through with every passing kilometre. Departing Upington airport, the contingency made its way towards Pofadder, where we were informed on what we could expect on the remainder of Day 1.

With his witty sense of humour, Johann led the convoy through Pella and Charlie's Pass - a rocky mountain pass just a few kilometres out of the small Northern town - in *Coddiwomple, his newly acquired Jimny. This was the first opportunity to truly put the Jimny through its paces in its natural habitat. Driving the GLX AllGrip manual, we deflated the tyres to 0.8 bar and engaged 4x4 Low. Ever impressive, the Jimny glided over the rocks and up the slippery incline without hassle. Not once did it feel out of place or intimidated, reasserting confidence on the driver that any challenge can be tackled.

READ: Tackling gravel and mountain passes in the Suzuki Jimny

Shortly after, we scaled another hill: Bobbejaanspieël Pass. With rocks scattered across the track and dongas everywhere you look, the convoy ascended under Johann's watchful voice over the walky-talkies. Coming back down was another treat as we engaged downhill assist. When engaged, drivers can take their feet off the pedals and trust the Jimny's electronics to take care of 4x4 duties. In 4x4 Low and 4x4 High, the Jimny will travel at a speed of 5km/h and 10km/h, respectively. If not familiar with this feature, it can freak you out at first, but it comes in handy when tackling the rough stuff.

That night, we slept under the stars under a mountainous wall next to the Orange River. Johann's wife, Karen, and their other son, JJ, joined us for the night. Piet, their 'first in command', ensured everyone's comfort and greeted us with freshly brewed coffee in the morning.

Coddiwomple: To travel in a purposeful manner towards a vague destination. Day 2 was basically a transition day. It started very peacefully around the fire, and everyone in attendance was at the receiving end of three cups of Piet's specially brewed coffee. Johann says that while he's tried Piet's method at home, it just never tastes the same. And judging by the number of coffees we drank that morning, it sounds about right that Piet is in a league of his own.

We made our way through more dunes, paid the Karstens Farm a quick visit, and headed for Kleinsee via Springbok. Our stopover for the next two nights was Die Houthoop Guest Farm, some 10km outside Kleinsee.

The next day was the one everyone looked forward to: the part of the Skeleton Coast that runs between Koingnaas and Kleinsee. With Johann having built a relationship with stakeholders across South Africa since 1992, he got the necessary permission to enter this privately owned beach.

He explains: "This section of the Skeleton Coast belonged to De Beers, but is now under West Coast Resources' ownership. The permission I have to enter the grounds has been given directly by the mine's manager. It is and remains a privilege to drive these tracks, and I will do anything and everything I can to keep the track open and protect it for future excursions. I also believe that this is an opportunity for mining and tourism to work in harmony, as is the case with the mine manager, Rudy Raadt, and I."

READ: A legendary birthday - Suzuki traces the Jimny's lineage as it celebrates the big five-oh 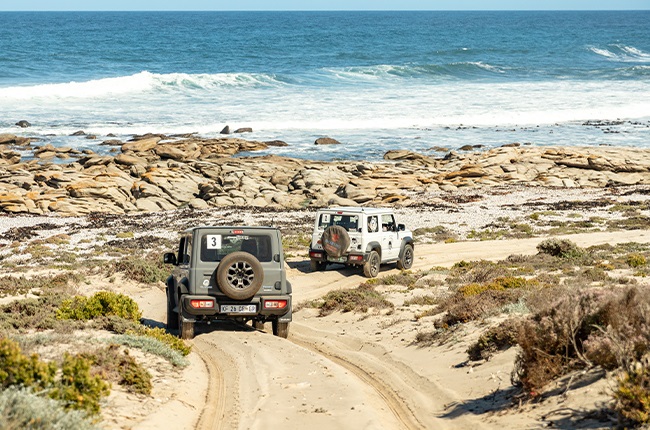 With check-ins completed, the convoy headed up the permitted route. We slowly made our way up and over the dunes, only driving on the existing tracks.

All Jimnys were in 4x4 Low for the simple reason that it dramatically reduces the risk of the tyres damaging the environment - and, of course, it makes scaling dunes a heck of a lot easier. And while the slow pace meant taking more time to complete the course, it was imperative not to leave a negative mark.

Soon we came across the first of three shipwrecks on our expedition. It was a magical sight: this massive boat sitting with its top half buried in the sand and the waves dancing against its wood. Johann knows almost everything in the area and could give in-depth insights into each shipwreck we came across.

We ended the third night with sundowners on one of the dunes on the HoutHoop farm, watching the sunset and listening to more of our expedition leader's tales. Johann says that he will open the Suzuki Safari to five private Jimny owners at the end of November 2021. After 50 years, the Jimny's legacy is just as strong as it ever was. Locally, it's carved a niche for itself that is virtually without rivals. But more, the capable SUV stuck to its core throughout its four generations and is a proven vehicle within the space it operates. And with the imported Jimny range's assembly having moved to India, the local arm is confident that the new plant will continue with the impressive Japanese craftsmanship we've come to know over the last five decades.

Brendon Carpenter, Brand Marketing Manager at Suzuki South Africa, says: "As one of the most globally recognised models in the Suzuki line-up, the Jimny represents the true spirit of Suzuki - authenticity, reliability and value - in a fun, adventure-loving compact 4x4. The massive global demand for the Jimny has been overwhelming, and we are sure that the increased production and assembly in India will enable more adventure seekers to live the Jimny way of life.

"With the Suzuki Safari, we showcased the undisputed off-road capability of the Jimny and its application as an economical and characterful off-roader. If the smiles and cheers are anything to go by, the expansion of the Suzuki Safari to other regions and iconic South African destinations will receive great support from both customers and the media alike."

In early 2022, Suzuki South Africa will expand the Jimny line-up with two GL models - manual and automatic - that will slot between the entry-level Jimny GA and top-of-the-range Jimny GLX. The entire range is fitted with Suzuki's AllGrip 4x4 system and powered by the same 1.5-litre 77kW/138Nm petrol engine.

The Suzuki Safari was the ultimate South African celebration of an automotive icon. From scaling the nearly impossible to gliding over dunes and sand, the Jimny is a proven 4x4 that has impressed with every passing generation. The latest iteration stays true to its roots and continues with the same recipe that has won thousands over throughout the years. 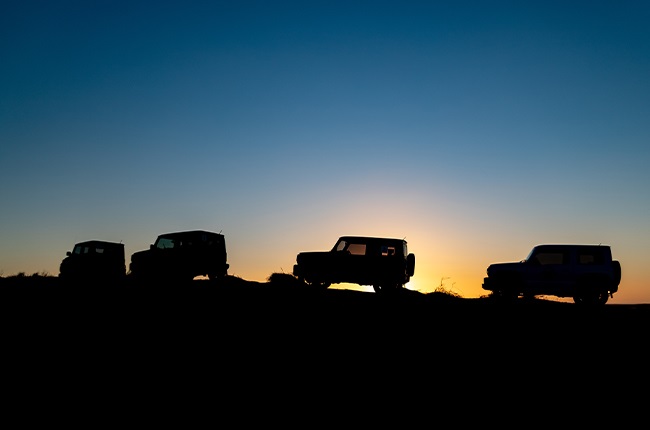 2021 Suzuki Jimny
Chris Wall Media
We live in a world where facts and fiction get blurred
In times of uncertainty you need journalism you can trust. For only R75 per month, you have access to a world of in-depth analyses, investigative journalism, top opinions and a range of features. Journalism strengthens democracy. Invest in the future today.
Subscribe to News24
Next on Wheels24
4x4 Trail | Mitsubishi Pajero IO tackles the Blesfontein farm tracks