'A resounding YES!' - GWM confirms diesel-powered P Series will be available in SA Over the past several days, news of GWM's SA-bound P Series drew quite a reaction from Wheels24 readers.

Great Wall Motors South Africa got wind of the various reactions and responded as best as they could to our readers' response.

While the automaker's local arm couldn't divulge too much detail, they gave enough for us to chew on as they ready for a potential 2020 launch.

One of the big aspects readers were quick to highlight, was the fact that only one engine would drive the range. Reader Jaco Annandale wrote to us, saying: "I've been following the news about the P series since its launch in 2019. In every story you've done on it so far, mention is made about the 'only' engine available being a 2.0-liter petrol.

"What about a diesel?"

We followed up on a rumour Annandale informed us about. What we established was that a diesel-powered P Series is making its way to Australia. And, given that Australia’s market is similar to ours, we can confidently speculate that this motor will debut locally.

We mentioned this to GWM SA and the automaker responded positively: "The answer is a resounding YES! There will be diesel versions. In fact, the model range will be vast, to say the least. There will be single cab and double cab models, in both 4X4 and 4x2 guises. Manual and automatic transmissions will be available on both the petrol and diesel versions.

"There will also be base, mid and high spec level derivatives."

Displacing 2.0-litres, the unit is said to produce 120kW and 400Nm from a lowly 1500rpm. Like the petrol, power will be channelled to the road through either an eight-speed ZF automatic transmission, or a six-speed manual gearbox.

For Australia, at least, their market expects torque to increase to 450Nm by the time the bakkie's launch comes around.

Now that a diesel version is confirmed for SA, do you think it has a better chance to rival the Toyota Hilux and Ford Ranger? Email us your thoughts. 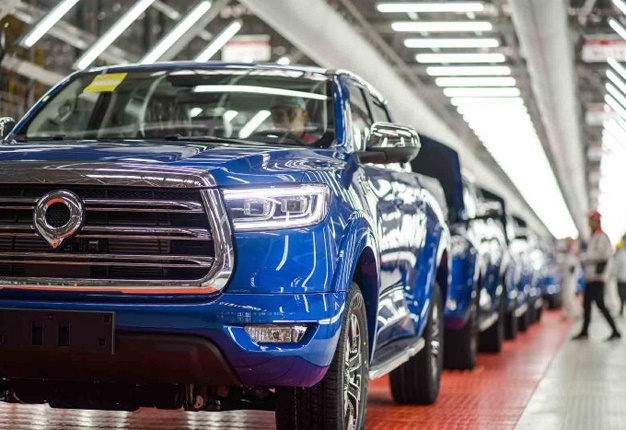 When can we expect it?

An aspect the local motor industry - public and media - is interested in, is when this bakkie will arrive in South Africa.

GWM's response: "We cannot confirm exactly when the P Series will be launched in SA. This is due to the outbreak of Covid-19 affecting the production plants in mainland China. We are not in a position to put a date to this until we can confirm when these amazing vehicles will arrive."

GWM is not the only automaker affected by the coronavirus outbreak. Globally, numerous factories closed shop, and in South Africa the national lockdown brought local production to a standstill. Some automakers had to reschedule new vehicle launches, while others went the digital route to gain some traction on social media platforms before the lockdown is lifted.

Whatever GWM decides in the coming months, its new P Series will have its work cut out if it wants to make an impression in our market, and especially to our readers - the avid bakkie-lovers.

We live in a world where facts and fiction get blurred
In times of uncertainty you need journalism you can trust. For 14 free days, you can have access to a world of in-depth analyses, investigative journalism, top opinions and a range of features. Journalism strengthens democracy. Invest in the future today. Thereafter you will be billed R75 per month. You can cancel anytime and if you cancel within 14 days you won't be billed.
Subscribe to News24
Related Links
Three reasons why the Ford Ranger and Toyota Hilux should worry about GWM’s new P Series
'One of the most beautiful double cab bakkies I have ever seen' - Readers respond to GWM's new P...
Next on Wheels24
REVIEW | Cayenne Turbo GT is more hyper car than SUV, and it's scintillating at full tilt