• Called the Stormtrak, it slots in above the Ranger Wildtrak.

• The bakkie will be available late in 2021's third quarter.

Ford has confirmed that another special edition Ranger will make its presence felt on the local market. Following on from the Ranger Thunder's local success following its debut in mid-2020, Ford South Africa has confirmed that a new model will build on that success. Called the Stormtrak, the bakkie is based on Ford's popular Wildtrak and will go on sale locally come the third quarter of 2021.

In this iteration, the Ranger Stormtrak is distinguished from the rest of the range by its unique design elements, black mesh grille with red inserts (like the Thunder), black decals on the bonnet and doors, black roof rails, and gloss black 18-inch alloy wheels.

Doreen Mashinini, General Manager for Marketing at Ford South Africa, says: "The Ranger Thunder was exceptionally well received when we launched it a year ago, proving unequivocally that there is strong demand for range-topping models that offer something different from the norm. The new Ranger Stormtrak follows the same recipe as the limited-edition Thunder by elevating the style, sophistication and exclusivity of our most luxuriously appointed model in the Ranger line-up." Like the Thunder and the FX4 launched earlier this year, the 'Stormtrak' lettering is in 3D and is seen all-around the bakkie's body. Lucid Red is unique to the Stormtrak's colour palette, but the bakkie can also be specified in Sea Grey, Frozen White, and Blue Lightning. Other notable standard features on the Stormtrak are a new Power Roller Shutter for the loading bay and a 12-volt power socket found inside the loading area.

READ: More attitude for your Ranger - Ford expands its bakkie line-up with another two new models

Like the Thunder, the Stormtrak also features an adjustable bed divider and a tailgate locking mechanism that works in tandem with the bakkie's central locking system.

Inside, red stitching adorns the cabin, and the 'Stormtrak' logo is embroidered on the front seats. The front scuff plates are illuminated, with Ford describing the interior's ambience as 'sporty'. The bakkie's technical features include Ford's SYNC3 with navigation, Apple CarPlay and Android Auto. FordPass is standard on the bakkie, too! This function allows users to access several of the bakkie's features and start the bakkie remotely or schedule a start-up to either cool or heat the cabin. 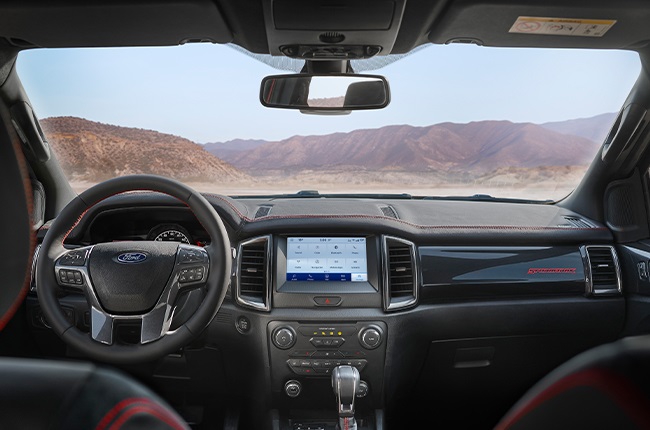 Ford's bi-turbo 2.0-litre diesel engine powers the Ranger Stormtrak. As with the Wildtrak, Thunder, and Raptor, the engine produces 157kW and 500Nm and is paired with Ford's 10-speed automatic gearbox. Using the rotary knob next to the gear lever, drivers can access the bakkie's 4x4 system.

Pricing for the bakkie will be announced closer to its local launch later in Q3. 2022 Ford Ranger Stormtrak
Quickpic
We live in a world where facts and fiction get blurred
In times of uncertainty you need journalism you can trust. For only R75 per month, you have access to a world of in-depth analyses, investigative journalism, top opinions and a range of features. Journalism strengthens democracy. Invest in the future today.
Subscribe to News24
Next on Wheels24
Porsche reveals new SA-bound Macan line-up: Here's when it arrives and what it will cost