Developed alongside its forthcoming modern Ranger double-cab and radical Raptor siblings, the third generation Everest arrives in South Africa with an altogether revised mandate – and bigger fish to fry…

With global demand for SUV-type vehicles showing little sign of slowing, it should be no surprise that most car brands remain particularly keen to put their respective best foot forward within this smorgasbord segment. Ever-popular in markets like Asia, Australia, and South Africa, the rise of the so-called bakkie-based SUV stems from our long-established affinity with the hardy double-cab offerings on which each of these packages is based – together with our inherent yearning for adventure. Launched in SA in 2009, the first-generation Everest introduced Ford's intention to take on the likes of the Nissan Pathfinder and sales-dominating Toyota Fortuner. Built on the then-still Mazda co-developed Ranger of the time, this first relatively basic Everest package would find more than 4 500 homes in South Africa.

Adopting Ford's T6 platform in 2011 would signal a massive leap forward in the overall strength, refinement and comfort of all the products built on this architecture, including the second-generation Everest launched in 2015. A now genuine threat to the monthly sale dominance of the Hilux-based Fortuner, the Everest would, from 2016, be assembled at the American brand's Silverton plant outside of Pretoria. 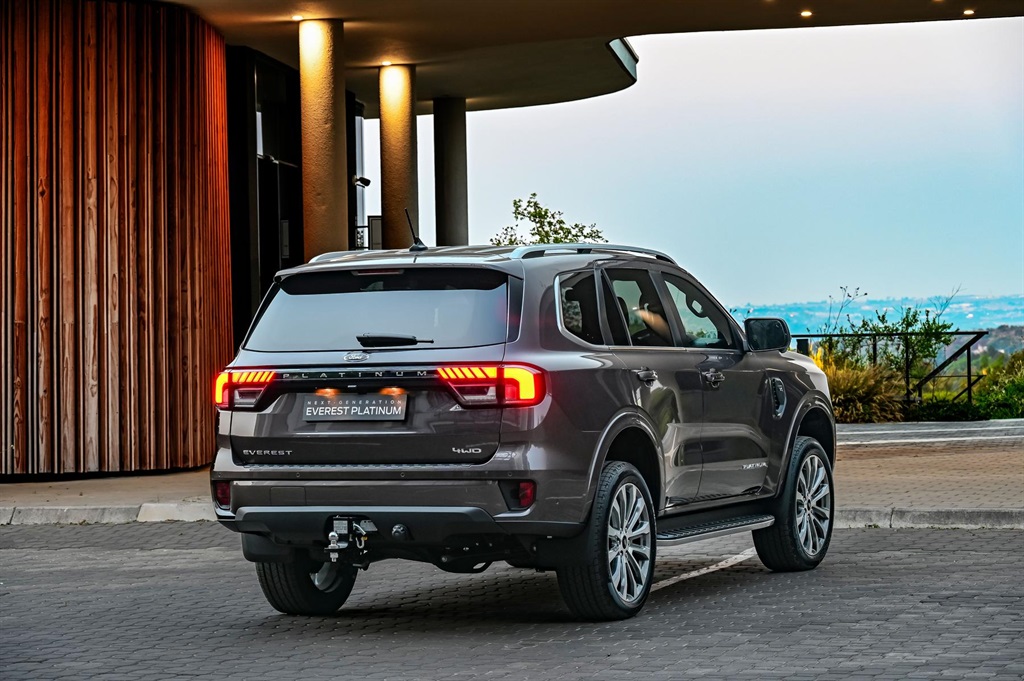 On the back of more than 22 000 sales in South Africa of the first "all Ford" Everest, the new third-generation model arrives ahead of its all-new Ranger and Raptor siblings. Larger in every dimension compared with the vehicle it replaces, the important news is that Ford believes the evolutionary stride taken with the new car is, once again, large enough to justify a refocus on who its market rivals are.

A 50mm stretch in wheelbase length compared with the second-generation Everest has been realised exclusively via a shift forward of the front wheels within the new package. A corresponding 50mm widening of the vehicle's wheel track widths, front and rear, offers the car both an altogether broader stance than before but is designed to accommodate a six-cylinder engine. Offering more head and shoulder room than before, while the Everest's two rows of rear seating can still be folded flat into the floor when not required, the new car offers 39-litres more luggage space behind the 60:40-split second row compared with the outgoing model. While third-row seating is still best suited to children or small adults, including roof-mounted climate control vents in this area is welcome.

With its US-market-inspired, squared-off lines, the significantly more imposing stance of the new Everest is bookended in the two models available at launch by standard LED head- and tail lights, as well as sleek-looking "C-clamp" LED daytime running lights. Lighting technology aside, Ford South Africa's determination to raise the profile of the Everest package in our market is highlighted by the fact that both derivatives available at launch feature premium standard specifications and, indeed, presence. Building on the success of the Everest Sport derivative introduced in 2021 by the previous generation, the new Sport model is distinguishable via its black alloy wheels and matching trim bits, including the grille, side mirrors and running boards. While more off-road-focused 18-inch alloy wheels are optional fitment throughout the range, the Sport wears 20-inch items fitted with 255/55 R22 Goodyear rubber as standard.  A new flagship Platinum derivative introduces standard 21-inch alloy wheels and various chrome highlights, including within the brand's newest family grille design.

Highlights of the Everest's modern interior include a focused improvement of all touch points and overall perceived build quality, as well as the incorporation of a new portrait-style, 12-inch infotainment screen. Assuming pride-of-place within the dash, this crisp display incorporates Ford's latest SYNC 4 software for improved functionality and convenience – including wireless smartphone mirroring technology. This screen also houses standard satellite navigation and a 360-degree camera system in top-spec Platinum trim. Also standard within the cabin of the flagship model is high-quality leather upholstery with heating for both the front and second-row seats, a 12.4-inch digital instrument display (8-inch in the Sport), adaptive cruise control and a full bouquet of Ford's latest active safety technologies.

While the Sport model inherits the same 2.0-litre bi-turbocharged diesel motor as featured in the outgoing range, the important news in terms of the new Everest package is the inclusion within the top-spec model of an F-Series-sourced 3.0-litre V6 turbodiesel motoring offering 184kW and 600Nm of torque. Both drivetrains are mated with a now familiar 10-speed automatic transmission. Not quite delivering the kind of neck-straining straight-line performance compared with the four-cylinder option that the figures suggest, this new V6 unit impresses with its overall refinement and confidence-inspiring go-forward, coping admirably with the Platinum model's now 2.5-ton overall mass.

Interestingly, there is no option to include steering wheel-mounted paddles in the new Everest package, the advantage of this being the ability to pre-empt downshifts ahead of either an incline or bend in the road. Instead, you rely solely on the otherwise intuitive workings of the transmission to source the "best-of-ten" forwards ratio. On the varied launch route, we averaged 10.4 litres/100km. While the new Everest feels immediately more premium – and expensive – than the outgoing model, its newfound sense of presence also means the car feels more substantial on the road. That said, while the car's broader overall footprint and updated suspension setup provide admirable support for its noteworthy mass, you're nevertheless always aware of the shifting in this weight around its centre point while heading into sweeping bends.

Far from a criticism, if anything, the new Everest package feels altogether more American than ever before, favouring on-road comfort and cruising ability over dynamics or driver engagement. And isn't this what a family-friendly SUV is supposed to offer? While it's interesting to note that Ford South Africa has purposely delayed the planning and introduction of an entry-level Everest that would continue to fight for monthly sales with the current Fortuner package, the altogether bolder stance of targeting Toyota Prado sales doesn't seem that ambitious once you realise just how big a step forward the Everest has taken in terms of comfort and refinement compared with the outgoing model.

Where the first Everest felt very obviously based on its Ranger sibling of the time, the second generation sought to introduce superior levels of comfort, versatility and overall sophistication compared with the bakkie with which it shared a platform. With the new car, Ford has planned from the outset to include as many points of separation as possible between the Ranger and a new impressively premium SUV that happens to share underpinnings with a bakkie.

We live in a world where facts and fiction get blurred
In times of uncertainty you need journalism you can trust. For 14 free days, you can have access to a world of in-depth analyses, investigative journalism, top opinions and a range of features. Journalism strengthens democracy. Invest in the future today. Thereafter you will be billed R75 per month. You can cancel anytime and if you cancel within 14 days you won't be billed.
Subscribe to News24
Next on Life
Still don't know how to pronounce Nissan's Qashqai? Never mind, it's back and looks better than ever