Ford has two new Ranger bakkies - Will they make it to South Africa?

Ford has revealed some exciting new Ranger double-cabs of late, which should pique the interest of local bakkie fans.

South Africa is both one of the Ranger bakkie's most important markets and global production hubs. Any significant update to Ford's mid-sized bakkie, has an influence on South Africa's commercial vehicle market, whether it be product diversity or production scaling for exports.

Two very opposing Ford markets have debuted new Ranger variants in May. The first of these is from Australia.

In the bakkie market which most accurately mirrors our own, the Australians now have the option on a Tradesman version of the T6 Ranger.

It is essentially a Ford utility double-cab, true to its Tradesman name, featuring a bedliner and rolls 16-inch alloy wheels. Do you think Ford should bring either of these bakkies to South Africa? Or, do you have a Ford Ranger bakkie you'd like to tell us about? Please email us your story and photos.

Those blacked-out alloy wheels might sound a bit small, but they do roll high-volume tyres, which are perfect for a utility bakkie. Bigger tyres allow for superior loadability and traction on gravel roads, or when navigating challenging off-road terrain.

Ford's Tradesman double-cab is distinguished from other Rangers by its modest front nudge bar, which carries a rectangular LED light cluster.

Illustrating how focussed Ford's product planning is with this Tradesman, is the engine. The only powertrain option is Ford's 3.2-litre five-cylinder turbodiesel, boosting 147kW and 470Nm. At quite the opposite end of the world, and Ford's Ranger line-up, is the new Thunder. This is a limited-edition version of the Wildtrak, built for the European market.

These Ranger Thunders are finished in a striking Sea Grey colour, complemented by anthracite wheels. Red contrasting styling details are found in the corners of the Ranger Thunder's three-dimensional grille, and its roll-bars' side surfaces.

Other distinguishing elements are darkened bezels surrounding the fog lights and darkened head- and taillights.

The loadbox can be covered by a powder-coated roller shutter, for ultimate security and wetproofing of whether you might wish to be transporting.

Inside this limited-edition Wildtrak are "Thunder" badges embroidered into the seats, while red stitching threads around the steering wheel rim, seat panels and instrument binnacle. Completing the red theme are sill plates, which illuminate in scarlet. Aimed at a lifestyle buyer, as opposed to the Tradesman's utility customers, the Thunder rolls on 18-inch wheels and is powered by Ford's most sophisticated bakkie engine, the 2.0-litre bi-turbodiesel, boosting 157kW. With more gears than any other bakkie, the Thunder's ten-speed automatic transmission is effortlessly adaptable to all applications: traffic, highways cruising or rock-crawling.

Although both the Tradesman and Thunder are Rangers newly introduced and scheduled for other markets, they offer valuable insight into what might become available locally, in the coming months.

Ford South Africa has a proven legacy of deploying Ranger special-edition models into the local product portfolio. The company's domestic production facilities could easily apply some of the styling features and trim seen on either Tradesman or Thunder, to local Rangers in the near future.

The local automaker says there's no word yet if either of the vehicles will make it to SA shores for now. 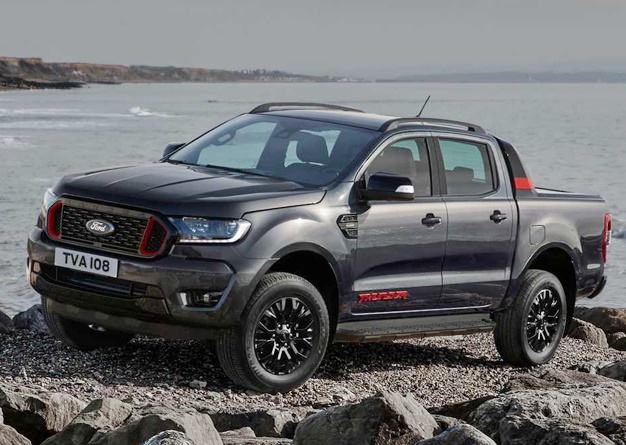 We live in a world where facts and fiction get blurred
In times of uncertainty you need journalism you can trust. For 14 free days, you can have access to a world of in-depth analyses, investigative journalism, top opinions and a range of features. Journalism strengthens democracy. Invest in the future today. Thereafter you will be billed R75 per month. You can cancel anytime and if you cancel within 14 days you won't be billed.
Subscribe to News24
Related Links
WATCH | Hilux and Ranger bakkies slug it out in crazy tug-of-war contest
WATCH | How Ford's Struandale plant assembles your favourite Ranger engines
Next on Wheels24
Scout III: Move over Ford Bronco, VW plans to revive the iconic off-road moniker

Get the newsletter
Lockdown For
DAYS
HRS
MINS
Brought to you by
Voting Booth
Do you think Mercedes will return to form later in the 2022 F1 season after two poor races?
Please select an option Oops! Something went wrong, please try again later.
Yes, don't discredit them.
33% - 464 votes
Who cares, F1 is exciting again!
44% - 604 votes
No, it's Ferrari's turn to dominate again.
23% - 318 votes
Previous Results
Car Doctor
How much it costs to replace tyres if you buy one of SA's 5 most popular vehicles