Ford now adds the ultimate X-factor to its Raptor bakkie, but will it come to SA? • The cabin gains a new stitching colour, too

• This could be the last T6 Raptor update, before the new Ranger arrives, next year

Ford has revealed an updated version of its most capable global market bakkie, the Raptor.

Demand for Raptor remains very strong. For double-cab bakkie buyers outside North America, the Raptor delivers a stance with a more significant street presence than any other bakkie.

Its kerbside image is supported by incredible off-road ability, too, across a broad reach of applications. Whether you need a bakkie for high-speed gravel road driving or slowly navigating treacherous trails in Lesotho, the Raptor is peerless. Ford has decided to add some equipment and styling to its Raptor, with the 2021 update revealed as Raptor X.

Designers at Ford have given the Raptor X a new graphics package, with two over-the-body stripes applies to its bonnet, roof and tailgate. This theme is supported by new sidebar stripes, too. If you are a fan of all things Ford ST and GT, the legacy of this Raptor X graphic update will not be unfamiliar.

Ford has not altered the Ranger Raptor X's wheel design, but you get red recovery hooks and a black Ford logo on the tailgate.

In the loadbox, Ford has extended the dimensions of its Raptor sports bar, which now reaches back beyond the wheel arches on Raptor X. A matte finish has been applied to Raptor X's grille, bumper, door handles, fender vents and fog light bezels. The design logic was to increase the bakkie's overall colour contrasting without using a finish that will easily scuff and show scratches, with regular off-road use.

The 17-inch alloy wheels have also received a matte finish, which will please Raptor X owners no end. Gloss black wheels simply go to ruin on a bakkie.

Inside the new Raptor X, those detail-obsessed Ford bakkie fans will immediately notice the red steering wheel and dash stitching, replacing blue trim. Black accents have also been applied to the dash and doors. 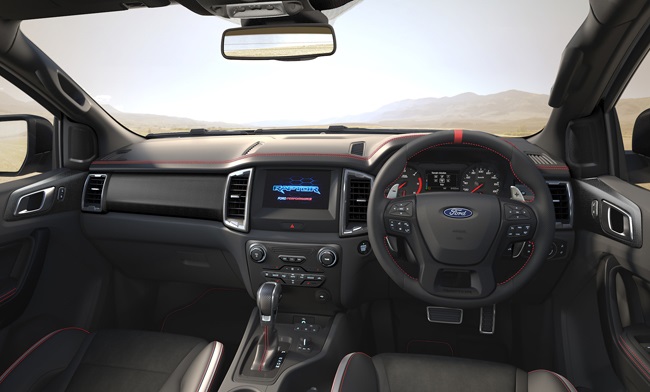 Mechanically the Raptor X has not been altered. You get the same 2-litre bi-turbodiesel, boosting 157kW and 500Nm, with a ten-sped automatic transmission and advanced terrain management system.

Ford South Africa has not revealed any local plans for the Raptor X, but what happens in Australia, is usually a precursor for our domestic market.

And in all honesty, who doesn't want a Raptor with red recovery points? Ford Ranger Raptor X
Supplied Ford Media
We live in a world where facts and fiction get blurred
In times of uncertainty you need journalism you can trust. For only R75 per month, you have access to a world of in-depth analyses, investigative journalism, top opinions and a range of features. Journalism strengthens democracy. Invest in the future today.
Subscribe to News24
Next on Wheels24
OPINION | A month of driving bakkies, including the not-yet released SA-built Nissan Navara