Ford revives its erstwhile Jeep rival, but should they have made it available in right-hand drive?

• Going back to its roots as Jeep Wrangler competitor.

• Based on the Ranger T6 platform but not slated for RHD.

It was never sold locally (some were imported, though), but many South Africans will remember the Ford Bronco for the sedate police chase of a white 1993 model carrying American football star OJ Simpson down the Los Angeles Interstate.

This "chase" in June 1994, watched by an estimated audience of 95 million people, was described as "the most famous ride on American shores since Paul Revere's".

And while the model gained sudden popularity as a result, Ford discontinued the Bronco range two years later. However, this was not because of the famous chase, but due to Ford making room for larger family SUVs such as the Explorer and Expedition to compete with larger models from General Motors and Chevrolet, as sales of the smaller, two-door Bronco was already waning.

Now the Bronco is back and the all-new outdoor family of SUVs - much like the original range introduced in 1966 - include a two-door and a rugged, small SUV (Bronco Sport) but also the first-ever Bronco four-door model; all with standard 4x4 drive. However, the range has only been confirmed for left-hand-drive production.

Ironically, the launch was rescheduled from March to July; but postponed again when it was pointed out this will coincide with the controversial Simpson's birthday. In taking on Jeep, Detroit has also introduced the Built Wild brand to embrace the Bronco's "go over any terrain" (GOAT, as it is coined) capability and heritage-inspired design DNA. The two- and four-door off-road variants are based on the Ford Ranger T6 ladder-frame platform. And with removable roofs and doors, they are direct rivals to the Jeep Wrangler and Toyota Land Cruiser 70. The smaller, less off-road-oriented SUV built on the Ford Escape (Kuga) platform, is aimed at the Land Rover Defender (to a degree) and Chinese models such as the BAIC B40.

In terms of size and application, the shorter wheelbase two-door Bronco will challenge the Wrangler Limited, with the four-door (seating five) taking on the Unlimited version. Like the Wrangler, the Ford is equipped with Dana 44 locking differentials front and rear, but its front suspension is independent, similar to the Ranger Raptor, yet unlike the Wrangler.

READ: Ford's new Bronco makes its debut after 15-year hiatus, but will it come to SA?

Like the Ranger, the Bronco uses a live rear axle set-up, but position-sensitive Bilstein dampers replace the Fox shock absorbers as used in the Raptor. It also uses a hydraulically powered disconnecting sway bar (as found on the Wrangler Rubicon) to increase off-road articulation.

The Bronco is also available with factory-fitted 35-inch tyres, and this, together with its bespoke suspension and short body overhangs gives the Bronco a full 294mm of ground clearance, with a 43.2-degree approach, 29-degree ramp-over, and 37.2-degree departure angle - endowing it with serious off-road capability. 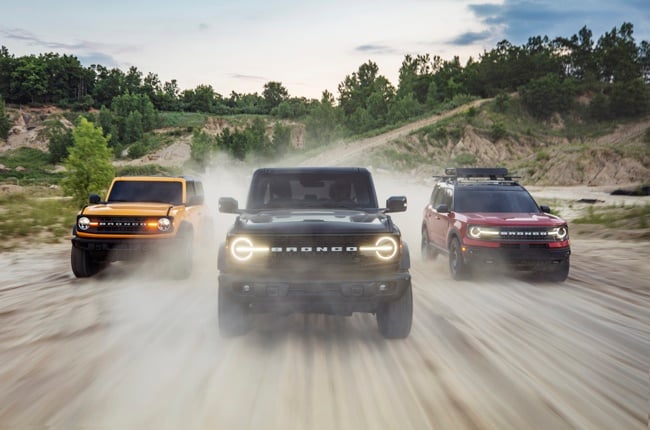 Available only with EcoBoost turbocharged petrol engines (no diesel option), the flagship models are powered by a 2.7-litre V6 delivering a projected 231kW and 542Nm of torque, or the 2.3-litre four-cylinder with an expected 201kW and 420Nm of torque.

Styling-wise, the Bronco draws heavily on its heritage. Similar to the original model, it has square proportions, short overhangs and a wide stance and its flat side profile has clear-cut edges, flared fenders and large open wheel wells. Round lights dominate the front, as well as a Bronco emblazoned grill.

The hardtop's rear quarter windows are removable without removing the roof panels and a soft cloth top, standard on four-door models, has a unique tilt-up function for quick access to the rear cargo area. Every Bronco also comes with removable frameless doors that can be stored onboard.

Inside, the instrument panel is inspired by the first-generation model. A multifunction colour LCD instrument panel dominates the panel, and the transmission selector and GOAT Modes controller are situated in the centre console. Off-road tracks can be downloaded, charted, recorded, or shared via the infotainment display and over 200 aftermarket accessories are also available.

According to Ford, the new Bronco will be "built with the toughness of an F-Series truck and performance spirit of Mustang", and as with the five generations before it, production of the 4x4 newcomer will begin at the Michigan Assembly Plant in Wayne, Michigan, in early 2021 - with a starting price of $29 995 (about R505 000). The smaller Bronco Sport SUV expands the rugged family of 4x4-only vehicles with five trim levels - the base model, Big Bend, Outer Banks, Badlands, and First Edition - and an advanced 4x4 system with a class-exclusive twin-clutch rear-drive unit with a diff-lock feature (on the Badlands and First Edition).

Its safari-style roof enables good headroom and a cargo area high enough to hold two 27.5-inch-wheel mountain bikes, and more than 100 aftermarket accessories are available to transport gear. It also has a slide-out working table, plus a 400-watt inverter and liftgate floodlamps. The Bronco Sport features a Sync 3 system with eight-inch touch screen and Apple CarPlay and Android Auto compatibility, plus the Ford Co-Pilot360 suite of driver-assist technologies. Why no right-hand drive?

With the Bronco two-door and four-door models sharing their underpinnings with the Ranger pickup, why would Ford not consider right-hand-drive derivatives? Well, with Bronco is not earmarked for Europe and the UK, Detroit probably considered demand from other RHD markets, such as Australia and South Africa, as too small to justify the cost to produce right-hand-drive models.

This is somewhat ironic, as the Bronco's Ranger derived platform was developed in Australia. And interestingly, the third generation Bronco was assembled in Australia from 1981 to 1987. The fact that the range is only available with petrol power (Australia and South Africa prefer diesel 4x4s) may also have played a role. Even so, there are compelling arguments for right-hand-drive production.

With Ford of Southern Africa already producing the Ranger in RHD and LHD format, development costs of an RHD version should be less. Also, with the Bronco conceived primarily to take on Wrangler, it should be made available in all markets where its major Jeep competitor is present.

Jeep has been available in RHD markets for decades, and the new Wrangler, recently introduced to South Africa, is currently only available with petrol power. Lastly, with the Ranger Raptor's twin-turbo diesel engine available, developing a Bronco derivative should be possible.

Limited production of such a model in the Silverton plant (for RHD export as well) can genuinely contribute to the productivity and profitability of the plant. Who knows, maybe Ford is working on such a project for the future. We can only wait and see.

Would you like to see the Bronco built in RHD and made available in South Africa? Email us. Ford's off-road SUV expertise traces back to World War II when the company built more than 270 000 "general purpose" vehicles - jeeps - for Allied forces. (Interestingly, Ford designed the seven-slot grille used by Jeep.) However, the company decided the military jeeps were too small and uncomfortable for civilian use and developed a more refined, spacious, yet durable off-roader to meet this need - the Bronco.

The original Bronco had a body-on-frame design with short front and rear overhangs, high ground clearance and a short wheelbase for maximum off-road capability. Nicknamed GOAT by then-Ford president Donald Frey, it was dubbed "a completely new line of sports-utility vehicles" - according to Ford the first reference to "SUVs" from an American manufacturer.

Its ability at high speeds enabled racers Rod Hall and Larry Minor to capture an overall win in the Baja 1000 of 1969 - a feat no other production 4x4 has replicated in the last 50 years. However, the succeeding four generations (from 1978 onwards) were based on the Ford F-Series chassis, except for the similarly named, yet unrelated Bronco II, produced from 1984 to 1990.

The Bronco holds a special place in popular culture. It has been featured in more than 1 200 films and 200 songs. Since Ford ended production in 1996 (it took 20 years before its revival was officially confirmed), Bronco SUVs have continued to grow in popularity with collectors and enthusiasts. We live in a world where facts and fiction get blurred
In times of uncertainty you need journalism you can trust. For 14 free days, you can have access to a world of in-depth analyses, investigative journalism, top opinions and a range of features. Journalism strengthens democracy. Invest in the future today. Thereafter you will be billed R75 per month. You can cancel anytime and if you cancel within 14 days you won't be billed.
Subscribe to News24
Related Links
REVEALED | Ford's new Bronco makes its debut after 15-year hiatus, but will it come to SA?
These three half-tonne double-cab bakkies could do exceptionally well in SA
Next on Life
Inside info you would want to know about Ford's new single- and super-cab Ranger bakkies