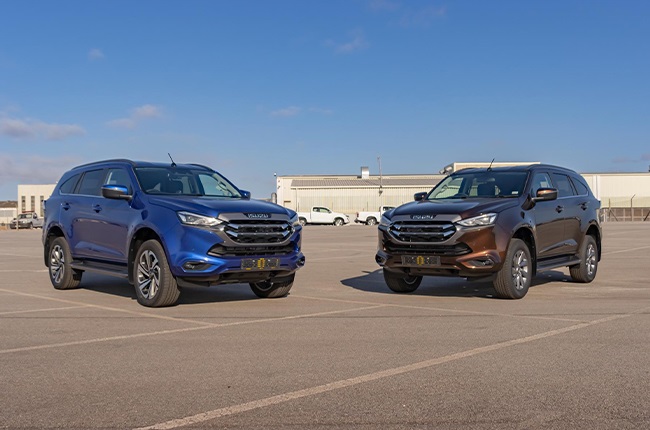 • The mu-X is based on the D-Max bakkie, but local specification is yet to be confirmed.

• The mu-X rivals the likes of the Toyota Fortuner.

Isuzu South Africa confirmed the all-new mu-X would make its local debut before the end of 2021. Based on the Japanese automaker's popular D-Max bakkie, the SUV is a rival to the likes of the Toyota Fortuner and Ford Everest, with the second generation model looking to continue the fight for Isuzu in this very popular segment of the market.

While pricing and product specifications will be announced closer to the launch date, Isuzu SA confirmed that the SUV would be equipped with active and passive safety features, and that the multimedia system is Android Auto and Apple CarPlay compatible. The exterior takes plenty of design cues from the all-new D-Max, which is expected to launch in South Africa in 2022.

While drivetrain details are not yet confirmed, it can be safely assumed that the new mu-X will adopt the same 1.9-litre (110kW/350Nm) and 3.0-litre (140kW/450Nm) turbodiesel engines as the next D-Max. Given buying trends, Isuzu may choose to, again, offer the mu-X with the six-speed automatic gearbox only, available in both 4x2 and 4x4 guises.

Dominic Rimmer, Senior Vice President Technical Operations at Isuzu SA, says: "The upcoming Isuzu mu-X is a game-changer for us, as it offers class-leading driver assistance technology, new state of the art powertrains, and a luxurious interior designed for maximum comfort for seven occupants.

"We are steadily on track to launch the next generation Isuzu mu-X in South Africa. Vehicle testing was successfully conducted late 2020, and we continue to test the vehicle under several conditions to ensure it is suitably prepared for South African conditions."

We live in a world where facts and fiction get blurred
In times of uncertainty you need journalism you can trust. For only R75 per month, you have access to a world of in-depth analyses, investigative journalism, top opinions and a range of features. Journalism strengthens democracy. Invest in the future today.
Subscribe to News24
Next on Wheels24
First Drive | Toyota's new King of 'Cruisers: The V8 is dead. Long live the V6s