Hilux, Raptor, P-Series? These bakkies made the biggest impression on the market in 2020

• We list several bakkies that made an impact in 2020.

• The Toyota Hilux was the biggest surprise of the year.

• GWM's P-Series is the newest bakkie to have been launched locally in 2020.

Though 2020 has not been the easiest of years, South Africa's bakkie market is still as healthy as ever. This year, several new bakkies were launched, as well as bakkies that came in for review by the Wheels24 test team.

We look at some of the bakkies that made the most significant impact in 2020.

The Hilux is an institution in South Africa. Not only is it the best-selling bakkie, but the best-selling vehicle overall. For 2020/21, Toyota updated the backbone of its product lineup and gave the bakkie a raft of updates, both visually and technically. The biggest updates are on the 2.8-litre turbodiesel engine that now produces 150kW and 500Nm of torque. On the manual models, however, torque is rated at 420Nm.

The bakkie also features aesthetic updates, as well as improvements to the interior. And the drive is vastly better than the model it replaces. Though we are yet to get the new Hilux on test, the launch drive impressed wholly to indicate as to what we can expect from SA's king of bakkies. Next to the Hilux is the Ford Ranger as SA's favourite bakkie, but it is the Raptor that headlines the Ranger lineup. Earlier this year, the Wheels24 team drove the bakkie through various parts of the Western Cape, ranging from mountain passes to an off-road course. The bakkie again reaffirmed just why it's such a capable vehicle and what warrants its inclusion among SA's tried-and-tested bakkies.

The Raptor's little brother, the Ranger Thunder, has been with the Wheels24 team since September 2020. The bakkie, part of our fleet of long-term vehicles, is based on the Ranger Wildtrak but adds several cosmetic updates to the equation. Unlike the Raptor, it does not boast an improved suspension setup but has the same 2.0-litre bi-turbo diesel engine (157kW/500Nm) at the front.

Which bakkie, in your opinion, made the biggest impact on the local market in 2020, and why? Email us or use the comment section below. Earlier this year, the Volkswagen Amarok Canyon came in for testing. Powered by a 3.0-litre V6 diesel engine, the bakkie boasts an impressive ride quality and smooth delivery of power. The Canyon has since been discontinued from the Amarok lineup, with the automaker bringing its Amarok to market. The V6 engine also powers this bakkie, but power has been increased to 190kW/580Nm. The P-Series is the newest addition to the South African bakkie market. Launched locally at the start of December 2020, the bakkie offers a comprehensive package but at a fraction of the price of its more esteemed rivals. A 2.0-litre turbodiesel engine (120kW/400Nm) does duty in all applications of the P-Series but performs adequately on the open road. Apart from some turbo-lag and vast amounts of understeer, it is a breath of fresh air in our bakkie-mad country.

A six-speed manual and eight-speed automatic transmission do transfer duties, with the latter offering the best experience. 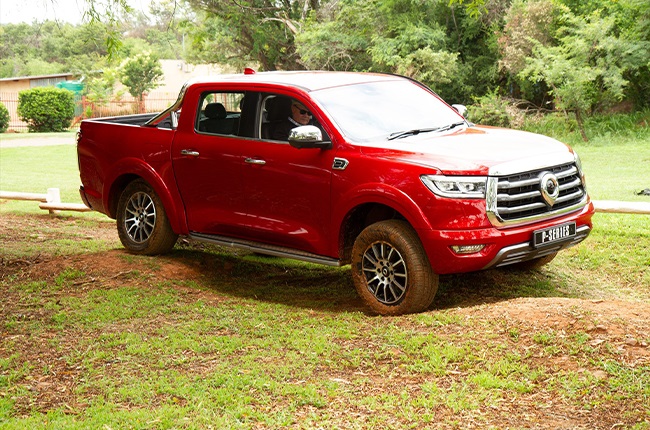 2021 GWM P-Series
Quickpic
We live in a world where facts and fiction get blurred
In times of uncertainty you need journalism you can trust. For only R75 per month, you have access to a world of in-depth analyses, investigative journalism, top opinions and a range of features. Journalism strengthens democracy. Invest in the future today.
Subscribe to News24
Related Links
WATCH | Why Ford, Isuzu and the rest should be wary of Toyota's new Hilux
WATCH | 'Dala what you must' - Jason Goliath launches Ford's new bakkie, and he's hilarious
DRIVEN | GWM's new P-Series finally in SA - here's how it stacks up against Hilux, Ranger
Next on Wheels24
The importance of Land Rover’s new Defender V8