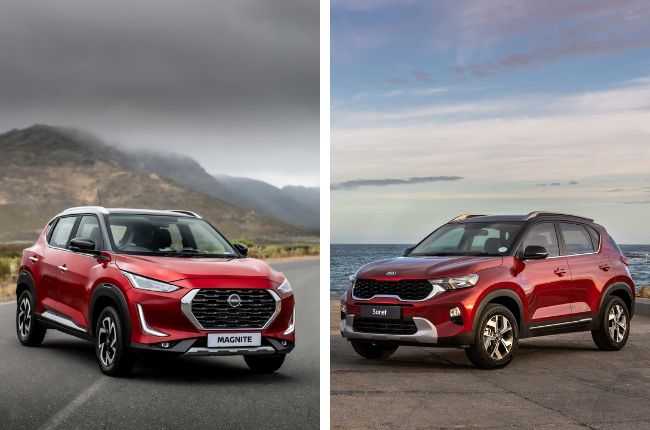 • Both vehicles are powered by small capacity engines, but the Nissan's is turbocharged.

• The Magnite and Sonet are aggressively priced.

South Africans are in for a treat after Nissan and Kia launched respective new crossovers in the local market. For Nissan, they kicked off proceedings in April with the arrival of their new Magnite, while Kia joined the fray in May with the new Sonet. Both crossovers act as entry points to the respective automakers' crossover/SUV lifestyle, with Kia South Africa boldly adding the 'Start your SUV life' slogan to the Sonet.

But for South Africans, the decision as to where to spend their money suddenly got a whole lot harder. The market for compact SUVs and crossovers have become so flooded in recent years that one has to think carefully about where you put your money. And with both Nissan and Kia bringing two formidable vehicles to the game, it's about to get a whole lot harder to make that sound decision.

We compare the Magnite and Sonet's pricing and drivetrains. It's a price game

Price is an important factor for any buyer. As such, Kia and Nissan priced their vehicles quite aggressively. The Magnite has a starting price of R256 999, with the Sonet beginning life at R264 995. Over a 60-month and with a 10% interest rate, the instalment difference between the two crossovers is R170 (Magnite: R5 460 | Sonet: R5 630). This amount will be affected when you factor in a deposit and/or residual. Kia and Nissan took on different approaches when it comes to the two models' engines. Nissan implemented a 1.0-litre three-cylinder three-cylinder petrol engine that offers 74kW and 152Nm (160Nm for the manual models). The Magnite's torque is available between 2200-4400rpm thanks to the addition of the turbocharger.

Kia, though, took the more traditional approach and added a naturally aspirated (N/A) 1.5-litre petrol engine to the mix. This mill produces 85kW/144Nm that are available at 6300rpm and 4500rpm, respectively. In our experience with N/A and turbo motors, the Magnite's engine should react to throttle inputs quicker while the Sonet's power delivery will be smoother.

Kia's Sonet has officially been launched locally this week earlier in May, while the Nissan Magnite will see its launch take place later in the month. 2021 Kia Sonet
Motorpress
We live in a world where facts and fiction get blurred
In times of uncertainty you need journalism you can trust. For only R75 per month, you have access to a world of in-depth analyses, investigative journalism, top opinions and a range of features. Journalism strengthens democracy. Invest in the future today.
Subscribe to News24
Next on Wheels24
Watch out, Ranger and Hilux! Mazda's refreshed BT-50 bakkie is finally here in SA