• Jacquem and Lucas Adams undertook a 4x4 adventure with Wheels24.

• Lucas is five-years-old and a big Ford Ranger fan.

• Lucas has a healthy vocabulary on him, despite his age.

"Do you like the bakkie, Lucas?" to which the five-year-old nods and says with a smile "Very much, Dad!"

I met Jacquem and Lucas Adams at an off-road course just outside Cape Town at the start of the week leading up to Christmas. Lucas, we've been told, is a huge Ford Ranger fan and almost always points and stares whenever one pulls up next to them. At five-years-old, he is quite clued up with the cars in the South African carpool, but his big love lies with the bakkie from the Blue Oval.

According to Jacq, Lucas was a ball of excitement ever since they told him about the little adventure with the Ranger Thunder two days prior. The night before, he could barely sleep and planned what he'd be taking with him on the trip. And he did! Lucas had everything with him from a camping chair to clean clothes and even a foot pump. I don't know why he brought a pump, but I suspected it was to inflate the tyres if we encounter any deflations.

At first, little Lucas was a bit nervous about meeting a stranger, but he soon loosened up and became the talkative kid his father said he was. 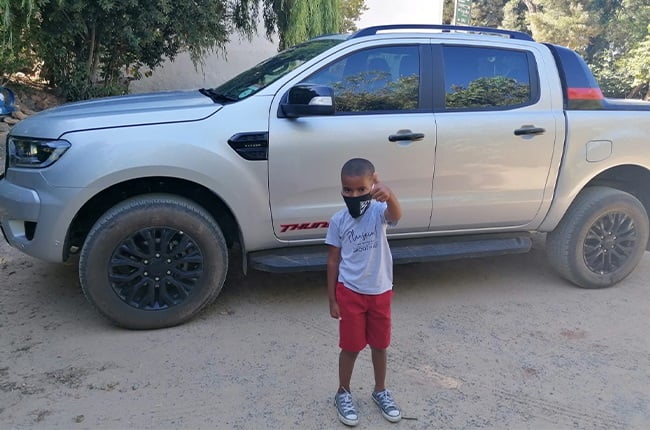 Lucas insisted on sitting in front, but on his father's lap. "You sit first, Daddy, and I'll sit on your lap."

The off-road course offers two types of tracks - difficult and (very) easy - with us opting for the smoother option. And given our slow speed over the largely even surface, Lucas was safe with his father. But then, almost suddenly, the kid asks where the "turning thing for the 4x4" is. This caught me off-guard because children will often know that a vehicle is a 4x4, but not that there is a button or dial to activate it.

I point it out, and Lucas asks if he can turn it. He activates 4x4 High successfully, instantly easing the scaling abilities of the Ranger Thunder. At our first stop, we exit the bakkie to take in the views. Lucas points out to his father that this looks like the area where they went for a hike recently and asks that they take a picture for his mother.

We got some things out of the load bay, and this is where I was really stunned. Lucas asked if he could close the 'tailgate' and said that he is "really impressed with the cargo box in the back" (I kid you not, this boy has a vocabulary on him!). The Thunder has a divider in the back that splits the load bay in two, but Lucas was convinced that there's a cargo box on the other side of the divider. We make our way further up the mountain before turning around and heading back down again.

Do you have, or know of, a child who is a huge automotive fan? Email us or use the comment section below. Before getting in the Thunder and making our way down again, Lucas told his father that he thinks he is ready to sit in front. Alone. "Please just help me with my seatbelt, Dad," the little boy asks as he settles into the passenger seat. Lucas has been impressed by the Ranger Thunder and his eyes are all over the interior, looking at the buttons and the multimedia screen.

A big interest was the picture of a bakkie that appeared on said screen every time we near an obstacle. The alarms and red lines on the screen had him asking all the right questions, but he was never prepared for what happened next.

I stopped the bakkie and explained to him that we'd be going down the slope without me putting my foot on the brake pedal. "But why? We must stop the bakkie, or we'll get hurt," he says. I explain the Hill Descent Control (HDC) function to him and ask if he'll give us a countdown, after which I'll remove my foot from the brake pedal. Lucas could not believe that the bakkie can brake on its own and still go down the hill at such a slow speed. When he had enough, he asked, very politely, that I please use my feet to operate the bakkie.

Back at 'base', Lucas was all smiles, but we agreed that we'd undertake another 4x4 adventure in the new year. "I'd like that very much, thank you," he says before we say our goodbyes. 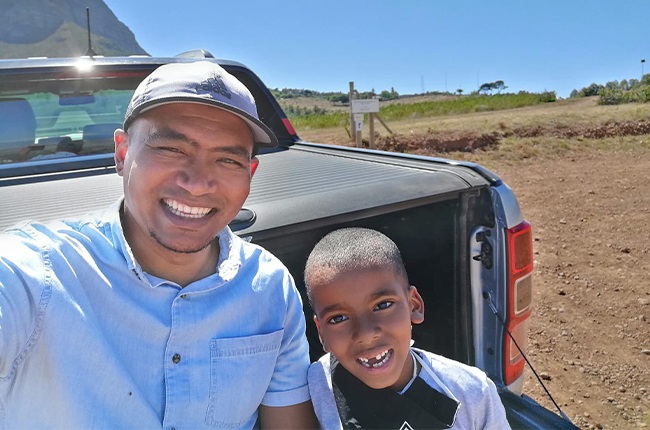 Jacq and Lucas Adams with the Ford Ranger Thunder
We live in a world where facts and fiction get blurred
In times of uncertainty you need journalism you can trust. For only R75 per month, you have access to a world of in-depth analyses, investigative journalism, top opinions and a range of features. Journalism strengthens democracy. Invest in the future today.
Subscribe to News24
Related Links
Ford Ranger Thunder update: Mileage and quick service adds to owner-experience
3000km later: Update on the new Ford Ranger Thunder
Ford Ranger Thunder joins Wheels24 garage - What we've discovered so far
Next on Wheels24
The importance of Land Rover’s new Defender V8