More attitude for your Ranger: Ford expands its bakkie line-up with another two new models

• It is not yet known if these bakkies will make their South African debuts.

• Given Ford South Africa's recent track record, it would be unwise to discount both bakkies' local arrival.

Ford UK announced that it would be bringing another special edition Ranger to market, called the Stormtrak. Boasting enhanced features in a familiar package, the Stormtrak looks to build on the Ranger's success recipe as the automaker readies for the all-new model's arrival in 2022.

For those who want to know if the Stormtrak and its sibling, the Wolftrak, will be coming to South Africa, Ford SA's lips are tightly sealed. However, given that the Ranger is built locally for export markets, including the UK, it might not be too far-fetched to believe that these bakkies will be made available locally. And judging Ford SA's track record of recent editions, it would be no surprise if we did see these models arrive in SA.

What is the Ranger Stromtrak?

Local bakkie fans will recall that Ford South Africa launched its Ranger Thunder in August 2020. Based on the Wildtrak and slotting in below it and the formidable Ranger Raptor, this bakkie sees several exterior enhancements added to the package. Yet, it retained the same bi-turbo 2.0-litre diesel engine (157kW/500Nm) that is implemented in the two bakkies in slots in between.

The Stormtrak also makes use of this engine, as well as the 10-speed automatic gearbox. And yes, the Stormtrak is available in both 4x4 and 4x2, with drivers toggling between the two modes using a rotary knob next to the gear lever.

READ: Here are all the special edition Rangers Ford launched in SA since August 2020 Remember the Ranger FX4? Yes, the very Ranger that was launched earlier this year. Having first made its South African appearance in 2017, the FX4 name returned to the country in 2021 and made quite the impression. Now, what do the FX4 and Wolftrak have in common?

Both are based on the Ford Ranger XLT.

Powered by Ford's 132kW/420Nm single turbo 2.0-litre diesel engine, the Wolftrak is available with either a six-speed manual gearbox or Ford's acclaimed 10-speed automatic transmission. And yes, there will be a 4x4 model on offer, too, with drivers engaging this driving mode via the same rotary knob as found in all Ranger bakkies, including the Stomtrak. Ford UK says that the Wolftrak is fitted with an electronically-locking rear differential and all-terrain tyres "to enable progress in challenging off-road conditions."

The bakkie is also fitted with low range. 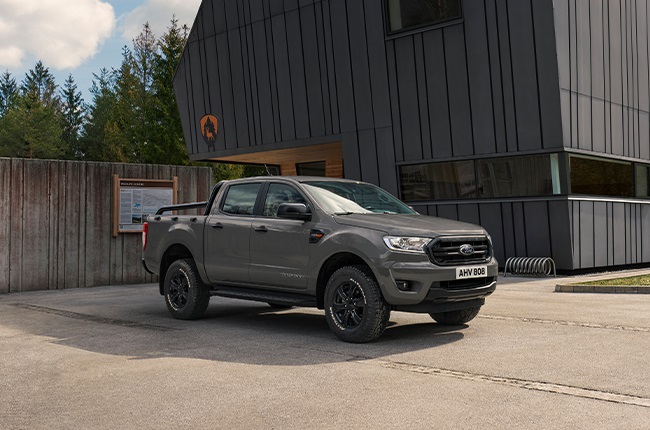 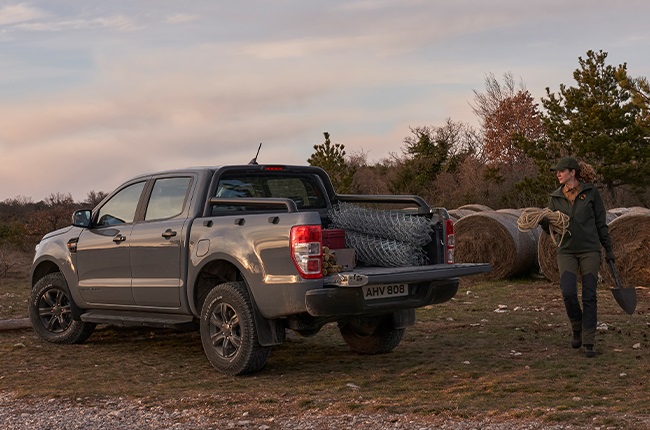 Locally, Ford South Africa has given its Ranger customers more freedom when individualizing their bakkies. Owners opting for the Ranger XL, XLS, or XLT derivatives can now fit their bakkies with a factory-approved Raptor-style grille. Ford SA says that the grille with its chunky lettering is a genuine Ford accessory and will not compromise the bakkie's warranty in any way.

Fitment of the alternative grille, which carries a suggested retail price of R4312 including VAT, takes approximately 30 minutes at a Ford dealer. Pricing does not include labour, says the automaker.

Further enhancing the Ranger's appeal is the addition of a power roller shutter to the Ranger Wildtrak. This addition, says Ford SA, comes at no additional cost, has been designed with an anti-pinch feature to prevent injury or damage when contact is made with an object.

Ford notes that "bespoke buttons on the key fob, instrument panel and inside the load box assist in making the power roller shutter as convenient to use as possible."

Dale Reid, Product Marketing Manager at Ford South Africa, says: "Constant market evaluation and clear communication with our customers and dealers have given Ford SA the necessary agility required to enhance the Ford Ranger to meet the needs of our customers. We believe this is the right time to introduce these Ford-approved upgrades to the South African market and thereby provide an expansive and diverse product offering." New grille option for Ranger XL, XLS and XLT in South Africa.
Quickpic
We live in a world where facts and fiction get blurred
In times of uncertainty you need journalism you can trust. For only R75 per month, you have access to a world of in-depth analyses, investigative journalism, top opinions and a range of features. Journalism strengthens democracy. Invest in the future today.
Subscribe to News24
Next on Wheels24
A fresh entry-point to the SUV life - Kia expands local portfolio with new Sonet