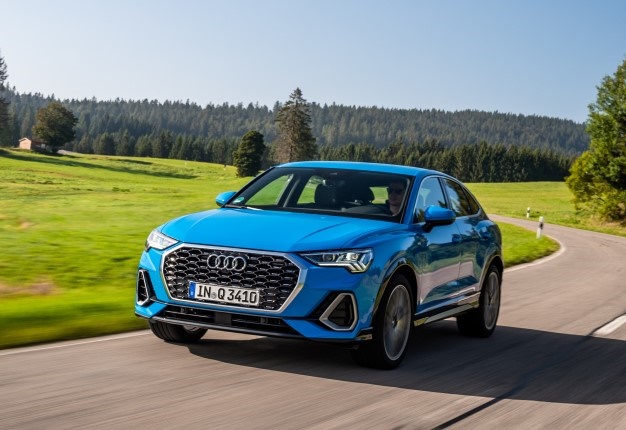 • Audi South Africa is adding a brand new model to its line-up.

• The Q3 Sportback is a compact SUV spawned from the company's Q3.

• Two models are avaialble: 35 TFSI and the more powerful 40 TFSI.

Audi South Africa has launched a compact SUV in coupé shape to its model range: the Q3 Sportback.

Audi says the new addition is the halo and design vehicle of the range. It features a black grille and trapezoidal air inlets. The low roofline gives way to flat D-pillars and ends in a roof edge spoiler, this gives the Sportback a much longer appearance than its sister model.

In profile , the low window, flanked by aero trims, and the sporty bumper, which takes up the look of the air inlets, emphasizes the width. When it comes to brightness, LED headlights and rear lights are standard on the vehicle with an option to upgrade to Matrix LED technology, whose adaptive high beam intelligently illuminates the road.

There are ten exterior colours are available, including the new metallic paint colour called Dew Silver, exclusive to the Q3 Sportback. Audi S line exterior trimmings are standard across the range, this includes prominent aluminium elements around the grille, bumper and air inlets. The standard wheel size is 18-inch with an option to upgrade to a larger 19 inch for a further advanced look. If you're keen on a more distinctive apperance, Audi has an optional Black Styling Package which includes of dark surfaces on the bumpers (front and rear) and emphasizes the grille, rear diffuser and the trim strips on the side windows in gloss black.

Depending on the driving situation, road condition and personal preferences, the driver can change the car’s characteristics via the standard dynamic handling system: drive select. The choice ranges between comfort, efficiency, sport and off-road modes. These two engine options are also offered across the range: a 1.4 TFSI with the denotation 35 TFSI has 110kW and 250Nm of torque from a four-cylinder direct injection unit. It uses a six-speed dual-clutch S tronic transmission and Audi claims a 0-100km/h time of 9.3 seconds.

A more powerful version is the 40 TFSI quattro S line which has a 2.0 TFSI engine producing 132kW and 320Nm of torque. It uses a seven-speed dual-clutch S tronic transmission.

The four-wheel drive model has a claimed 0-100km/h sprint time of 7.8 seconds. As part of the optionally selected Comfort Package, there is an electric tailgate that can also be opened and closed with a foot motion. , In addition are electrically-adjustable, heated front seats.

Optionally available is also Alcantara upholstery. In addition, Alcantara surfaces on the instrument panel and the armrests. In the interior S line package, the seat backrests feature the embossed S logo, and the sport leather steering wheel bears a corresponding emblem. The pedal caps and footrest are made of stainless steel. Inlays in dark aluminium and door sill trims with illuminated aluminium inlays. Inside there's a digital cockpit with a 22cm screen which the driver operates via the multifunction steering wheel, and comes with the integrated MMI touch radio plus as standard.

The virtual cockpit system is optional and allows them to switch between many information levels and multiple views. In the top-of-the-line system which part of the Technology Package, the Audi virtual cockpit plus comes with a 31cm screen diagonal along with MMI Navigation Plus. The standard Audi smartphone interface ensures inter connectivity between the car and smartphone. This integrates Android and iOS cell phones into the on-board infotainment system. The content of the smartphone is shown on the MMI display via Apple CarPlay or Android Auto.

There are several packages on offer, including, Comfort, Technology, Sport, Parking, S line interior and Black styling. Within each package structure is a few options suited to the particular proposition.

Both models come standard with the five year or 100 000km Audi Freeway plan.

We live in a world where facts and fiction get blurred
In times of uncertainty you need journalism you can trust. For 14 free days, you can have access to a world of in-depth analyses, investigative journalism, top opinions and a range of features. Journalism strengthens democracy. Invest in the future today. Thereafter you will be billed R75 per month. You can cancel anytime and if you cancel within 14 days you won't be billed.
Subscribe to News24
Related Links
Small town trips - Discovering Tulbagh in the new Audi Q8 45 TDI
WATCH | Audi's SA-bound S3 breaks cover
Next on Wheels24
FIRST DRIVE | Watch out, Hilux! Ford's new Ranger likely to turn SA's bakkie game on its head