'Optimised' Audi Q5 arrives in SA: we have pricing for the new line-up, including the SQ5

• The Audi Q5 has been a strong seller for the German automaker in South Africa.

• The new range makes its debut in the country, headlined by the V6-powered SQ5.

The facelifted - or 'optimised', as Audi calls it - Q5 has dropped in South Africa. Kitted with a host of technologies, updated interior, and revised engines, the SUV looks to win customers over with what it has to offer now. With a fresh exterior design, the interior has not been left untouched and is the SUV a wholly different vehicle from the one it replaces.

Audi says that customers can choose from 12 body paint colours, with the black appearance package available as an option on the Advanced, S line, and S models.

Topping the range is the Audi SQ5. This sports derivative is powered by a turbocharged 3.0-litre V6 petrol engine and comes with the performance to boot. 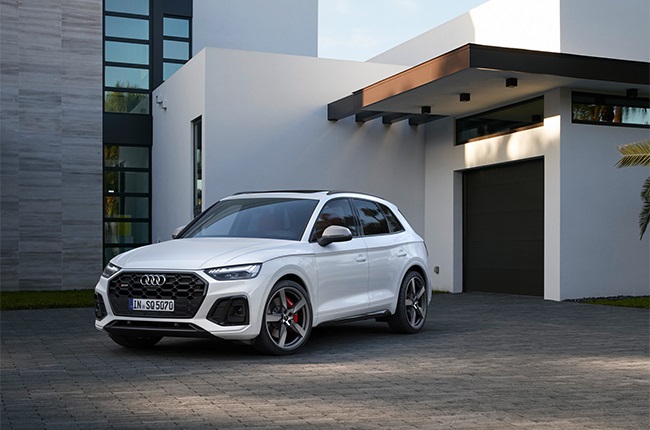 The new Audi Q5 range consists of five models, starting with the Q5 40 TDI Quattro and ending with the SQ5. Petrol engines power only the SQ5 and Q5 45 TFSI models. As the second most expensive model in the range, the Q5 45 TFSI's 2.0-litre mill produces 183kW and 370Nm of torque. The engine is mated to a mild hybrid system (MHEV), allowing the SUV to coast with the engine off at speeds below 22km/h. The fuel economy is improved by approximately 0.3-litres/100km, says Audi.

The SQ5's engine offers 260kW and 500Nm, allowing for a 0-100km/h time of 5.4 seconds. Top speed is electronically limited to 250km/h. Audi says they've fitted an actuator in the exhaust system to endow the SUV with "a sonorous sound".

The three remaining models are all powered by Audi's 2.0-litre turbodiesel engine, offering 140kW and 400Nm. Though fuel efficiency is this engine's strongest suit, it allows the SUV to clear 0-100km/h in 7.9sec. Audi claims an economy of under 5.0-litres/100km.

The new Audi Q5 range will officially go on sale in South Africa from 1 September 2021. It is priced as follows (inclusive of all taxes) and comes standard with a five-year Audi Freeway Plan:

Will Audi's new Q5 line-up continue the sales success of its predecessor in SA? Email us your opinion or use the comment section below. The Q5's driving traits can be adjusted from inside the cabin thanks to several driving modes that's on offer. Audi says that the standard suspension with steel springs can be specified with damper control and air suspension, giving the SUV a compliant ride quality.

The Q5 comes standard with 19-inch alloy wheels, but it can be optionally upgraded to 20-inches.

According to Audi South Africa: "Q5 customers can choose from different setup options. The sports suspension offers an alternative to the standard suspension and is an option for all models except the S line model, in which it is standard."

We live in a world where facts and fiction get blurred
In times of uncertainty you need journalism you can trust. For only R75 per month, you have access to a world of in-depth analyses, investigative journalism, top opinions and a range of features. Journalism strengthens democracy. Invest in the future today.
Subscribe to News24
Next on Wheels24
We need this in South Africa! Ford turns its 2022 Expedition SUV into the ultimate camper van