French automaker PSA and its main brand Peugeot is set to revitalise its trademarks in Southern Africa with a range of new model offerings, including new Citroën products and a Peugeot one-ton bakkie.

At the launch of the new 5008 SUV and the 108 entry-level hatchback in Gauteng last week Xavier Gobille, new MD for Peugeot Citroën South Africa, confirmed that besides the new 208 and 2008 models coming next year, Peugeot also plans to bring a new pickup to take on the established players in the local bakkie market.

While not divulging too many details, Gobille did verify this bakkie will not be the Peugeot Pick Up double cab, released in 2017 and built in Tunisia for distribution to North and Central African states such as Algeria and Nigeria.

READ: Peugeot SA bullish about the future as 5008 and 108 enter fray The Pick Up is actually a badge-engineered version of the Chinese-built Dongfeng Rich – itself based on the D22-generation of the Nissan NP300, or Hardbody, as it is known locally. Gobille made it clear the new pickup is a new-generation product and, contrary to earlier rumours, was not developed with assistance from Toyota.

It now seems quite clear the new Peugeot pickup was developed in association with the Chinese group Changan through a joint venture between Changan Automobile and Groupe PSA, established in 2010 as the French group’s second joint venture company in China after Dongfeng Peugeot-Citroën.

Cooperation with ChanganThis joint development programme of the new bakkie has recently been substantiated with the release last month of the new Changan Kaicheng F70 (or Kaicene, depending on the spelling convention followed) one-ton double cab pickup in China. A media release from Changan stresses the high-end quality and low noise values (a test value of about 44 dB) of the new double cab bakkie – to be marketed in China under the Kaicheng sub-brand, with the normal Changan branding kept for export products.

It seems the Peugeot derivative will keep most of the Changan pickup’s styling, with obvious changes to the aesthetics of front grille and valance to depict the design language and Lion’s head of the French brand, as well as the back.

Designed specifically to take on the Toyota Hilux, Ford Ranger, Isuzu D-Max, Volkswagen Amarok and Mitsubishi Triton the F70, at 5.3m long, 1.93m wide and 1.87m high, with a wheelbase of 3.18m, is slightly bigger than the Nissan Navara. Perhaps the biggest giveaway of PSA-Changan’s intentions with the F70 pickup is its interior, with the dashboard clearly inspired by the layout of the 3008 and 5008, replicating aspects of Peugeot’s i-Cockpit design.

According to the Changan release, the F70 comes with a brown/black two-tone design with silver and black paint trims and is equipped with cruise control, a multi-media system with LCD screen, a camera in the right rear-view mirror, dual USB ports in front, air outlets and USB ports in the rear, and 8-way electric adjustment for the driver’s seat. What else do we know? Well, in terms of power plants the F70 is equipped with  a 1.9-litre turbodiesel engine from Yunnei Power delivering 110kW and 350Nm of torque, an Isuzu VM 2.5-litre turbodiesel (95kW and 320Nm) and a 2.4-litre Mitsubishi-based turbo-petrol engine with 134kW and 270Nm of torque.

The engines are mated to a six-speed manual or auto gearbox with 4x2 or 4x4 traction, and according to the Changan release the 4WD model comes standard with ESP and an Eaton self-locking mechanical diff-lock. However, Peugeot may use its own HDI engines in the upcoming bakkie, perhaps including the 2.0-litre HDI turbodiesel delivering 110kW and 370Nm. Besides production in Shenzhen, China, the French brand has confirmed the vehicle will also be produced in South America – most probably in Argentina (where the South African versions will most likely be sourced from) and while not confirmed it will probably be released here late next year or early in 2021.

A history of bakkies

Given the dismal sales performance of new entrants in the pickup market such as the Mercedes-Benz X-Class, and the absolute dominance of the Hilux and Ranger models locally, what chance does a Peugeot bakkie have here? Well, dissimilar to Mercedes-Benz with its very limited bakkie heritage Peugeot has been building pickups for decades, also in Africa, and produced double cabs before it actually became fashionable.

A pickup version was available for the 203 model, built until 1960, the 403 and the 404 (with some units assembled in Natalspruit, South Africa), and the legendary 504 – described as “King of the African road” – was produced in Kenya until 2004, and Nigeria until 2006. A four-door crew cab pickup of the 504 was also produced in China and in Argentina. 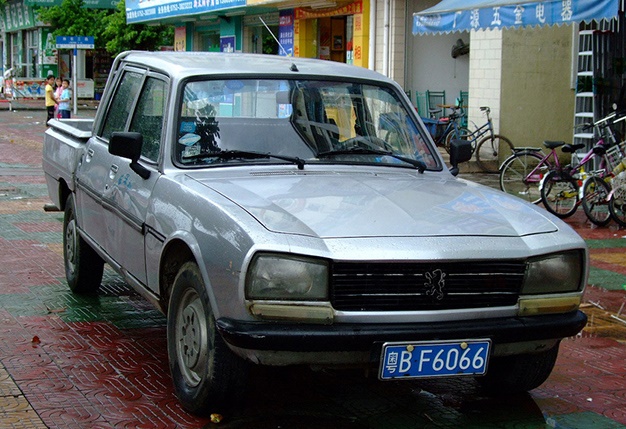 With this kind of pedigree and its venerated history in Africa, a pickup model can make a positive contribution towards the re-establishment of the French marque locally. However, pricing and specification levels will play a large role in how well it will be accepted here.

We live in a world where facts and fiction get blurred
In times of uncertainty you need journalism you can trust. For only R75 per month, you have access to a world of in-depth analyses, investigative journalism, top opinions and a range of features. Journalism strengthens democracy. Invest in the future today.
Subscribe to News24
Related Links
Peugeot relaunches its little 108 city-car in South Africa
New Peugeot 5008 - We have pics and prices
Next on Wheels24
One grand difference - would you buy this range-topping hatchback or entry-level SUV?