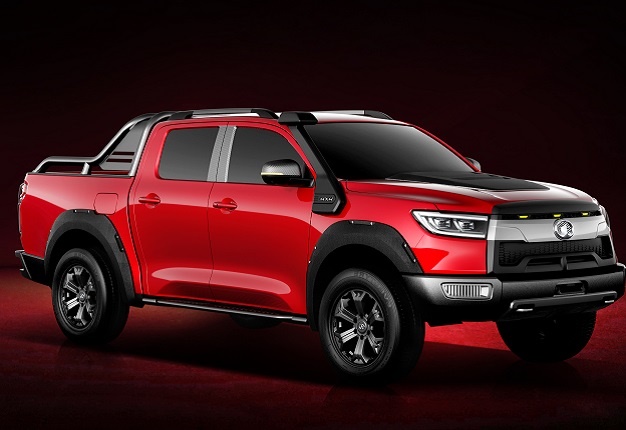 GWM also released two official pictures of the off-road version and said that this all new off-road bakkie will be equipped as standard equipment with off-road specific configurations such as a front winch, three differential-locks (front, middle, and back) as well as a snorkel, parts and features that are normally aftermarket accessories with most brands.

According to the official pictures, this off-road bakkie adopts a new aggressive design.

The new vehicle is equipped with a matte black off-road kit which includes a blackened grille, wheel arches, snorkel and other components to add to its aesthetic appeal. The most eye-catching feature is the decorative panel on top of the hood which looks like the aerodynamic ducts commonly seen in American muscle cars and greatly enhances the performance stance of the nose of the truck.

To further highlight performance, the new vehicle adopts a black honeycombed grille, while a thick grey plaque goes across the entire grille with blackened LED headlights on both sides of the grille.

The taillights also adopt full LED lights, finishing off the rear to match the front end of the truck. A large blackened panel is added to the tail door panel and as seen from the image, the cargo body is equipped with ramp ladder slot, so that the ladder can be easily attached to the tailgate to load and off load cross-country motorcycles and other leisure vehicles.

It is reported that the all new product series will be manufactured at Yongchuan Plant, a new production base of Great Wall Motors in Chongqing. According to the previously posted patent drawings, it is speculated that there will be several models in the new series of Great Wall Pickup. At this stage only the off-road model images have been posted but we will continue to share information of other models once we get them

We live in a world where facts and fiction get blurred
In times of uncertainty you need journalism you can trust. For 14 free days, you can have access to a world of in-depth analyses, investigative journalism, top opinions and a range of features. Journalism strengthens democracy. Invest in the future today. Thereafter you will be billed R75 per month. You can cancel anytime and if you cancel within 14 days you won't be billed.
Subscribe to News24
Related Links
SEE: These are some of South Africa’s cheapest bakkies
GWM Steed bakkie completes epic 4500km journey around South Africa
Next on Wheels24
EXPLAINER | What's the difference between a 4x4 and a 4x2 bakkie: Which one should you buy?