R1.5-million for a second-hand Toyota Hilux? These are SA's most expensive, used double-cabs

As of April 1, 2020, the most expensive bakkie in South Africa is the Mercedes-Benz X-Class 350d 4Matic Power.

At R985 113, the bakkie is flirting with the one-bar mark, but with a few optional extras, it shouldn’t be too difficult to exceed it. But that’s for a new bakkie. Surely a second-hand unit would cost substantially less, right? Right?

According to AutoTrader, the used bakkie market is rife with options that are far more expensive than the mentioned X-Class. By how much, I hear you ask? Well, almost R1.0-million more expensive!

This is crazy, but there are one or two valid reasons for the escalated premium. While one of the three bakkies listed below is an import, the other two were once owned by people who needed them for - how shall we say - protection.

South Africa’s bakkie market is a healthy one, and it only makes sense that owners would want to own the very best that's on offer. Not only is this Land Cruiser 79 the most expensive used bakkie in South Africa, but it could very well be the safest, too! Justifying this eye-watering price is the fact that the bakkie is credited as a B6 Bullet Proof Armour vehicle, making it virtually indestructible.

Specialised run-flat tyres and an emergency push-to-talk intercom system form part of the package. AutoTrader notes on its website that 24 months are remaining on the armoured warranty, though they cannot guarantee whether or not the standard service- or maintenance plans are unaffected. 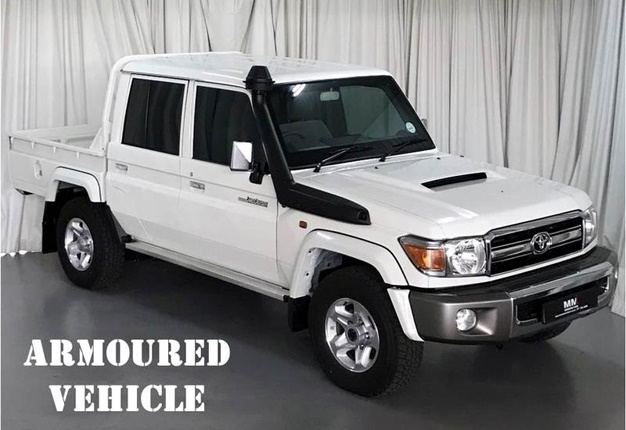 Ford South Africa does not sell any of its F-Series bakkies locally. In the early parts of the new millennium, the F250 graced our shores but was soon discontinued, given our market’s preference to one-tonners.

That did little to deter some owners from importing an F-Series from other parts of the world. This 2014 F-150 Raptor is one such example. Sporting a 6.2-litre V8 engine, 306kW/590Nm are sent to all four wheels via an automatic transmission. This bakkie offers seating for up to five adults, but given its size, we’d say you could easily several kids on the rear seat. Albeit illegally.

Features on this bakkie include blackened windows and a sunroof. Like the Land Cruiser at the top of our list, this Hilux is also armoured to a level B6. 5.5mm armoured steel cover every body panel and can stop an AK47 bullet in its tracks. The windows are also bulletproof and, with a 42mm thickness, offers protection against high-powered handguns.

This specific bakkie retails, as standard, for R622 800, but the alterations and add-ons have pushed the price up exponentially.

As far as we know, the mechanicals of the bakkie has been left unchanged. The turbocharged 2.8-litre diesel engine still delivers 130kW and 450Nm, and a six-speed automatic transmission does transfer duties between the engine and rear wheels. 2020 armoured Toyota Hilux. Image: AutoTrader
We live in a world where facts and fiction get blurred
In times of uncertainty you need journalism you can trust. For only R75 per month, you have access to a world of in-depth analyses, investigative journalism, top opinions and a range of features. Journalism strengthens democracy. Invest in the future today.
Subscribe to News24
Related Links
Back by popular demand! Toyota Land Cruiser Namib edition gets second production run
'I can't see myself driving anything else!' - Readers tell us why owning a VW Amarok is the best
Next on Wheels24
Predicting success: Can Peugeot's new 2008 topple its segment when it arrives next month?