Perception can be an ugly thing, especially when it comes to automotive brands that’s not part of the Big German Four (Audi, BMW, Mercedes-Benz, Porsche), or Japan’s Toyota.

In most cases, you’d find that consumers are dead set on supporting their brands, even if it means not having a wholly impression of what’s to offer locally.

One brand that’s buckling under criticism locally, is Alfa Romeo. Remarks about reliability is at the order of the day, as well as the fact that it is an Alfa Romeo. Just the badge alone counts against it for some reason. But those who know, will tell you that Alfa Romeo makes some of the finest vehicles on the road. In its stable, the automaker has the Giulietta, the Giulia – both cars – and then the Stelvio SUV.

The Giulia and Stelvio both have a sports model sitting at the top of their respective line-ups. These models, carrying the Quadrifoglio badge, are powerful machines that has no qualms about taking the fight to BMW’s M cars or Mercedes’ AMG brutes. But it’s the Stelvio Quadrifoglio Q4 that’s been dishing out smiles in the Wheels24 office the last few days. The Stelvio Quadrifoglio, or QV as it’s more commonly known, was launched in South Africa at the start of 2019. Under the bonnet it sports a 2.9-litre Ferrari-sourced V6 engine. Thanks to turbocharging, the engine produces a juicy 375kW and 600Nm.

Linked to an eight-speed automatic transmission, the all-wheel drive Stelvio QV can go from 0-100km/h in 3.8 seconds, and onto a top speed of 283km/h. That’s extremely fast and allows the SUV to give any sports car a good run for its money.

Adding the proverbial fuel to the (performance) fire, is the driving technologies that form part of the Stelvio QV’s arsenal. Three driving modes (Dynamic, Natural, and Advanced Efficiency – DNA) take care of your everyday needs, while a fourth mode, Race, transforms the SUV into a brutal machine. The Alfa Romeo Stelvio Quadrifoglio is one epic machine. It delivers performance in spades and is relentless in dishing it up. Engage Dynamic driving mode, but then turn the dial to Race and hold for a few seconds. Race will engage and stiffen the suspension.

PS: To soften the suspension in Race, just press the shock button on the dial.

In Race, the exhaust note will deepen, the accelerator is tauter, and steering feel becomes heavier. It stirs the proverbial pot and eggs you on to tap into its performance prowess. While not a Ferrari, you are fully aware of the potential under the bonnet and can’t help but chase the thrill of hearing the horses at full gallop.

Lay on the throttle and change gears via the massive steering wheel-mounted paddles. The sounds emitting from the exhausts will send your senses into overdrive as the emotion and passion of this Italian machine calls your name.

The Stelvio QV is not an SUV just donning a sports tracksuit. This is a proper machine that will have your heart racing, all the time.

League of its own

Wheels24's Janine Van der Post says: "After driving the Jeep Grand Cherokee Supercharged Trailhawk a few days prior to the Stelvio QV, I thought it would have big shoes to fill. Surprisingly, it was almost the other way around. While the Jeep is ridiculously fast, and makes you smile stupidly, the Stelvio is in a league of its own.

"It's an extremely handsome fella, it sounds magnificent, and drives absolutely superbly. It's a much more refined machine, and you can most certainly feel the difference in the 'DNA' driving modes. Turning the driving mode dial to 'Dynamic' and then the 'Race' setting almost pushes you back into the driving seat and really makes the car take on another persona.

"The attention to detail in the fit and finishes are heavenly to touch under your fingertips, right to the sonorous roar of the exhaust, and the burble that comes from the innovative powertrain. It all just has such Italian finesse.

"Alfa Romeo makes absolutely stunning cars, but we as South Africans are just not buying them. And, it's a terrible shame. Those who have owned Alfa's from yesteryear will know that these cars were ahead of their time, but were honest, reputable, and resilient machines. The trade value might be an utter disappointment, but gosh, the breed is just special to own and the Stelvio QV is testament to that." 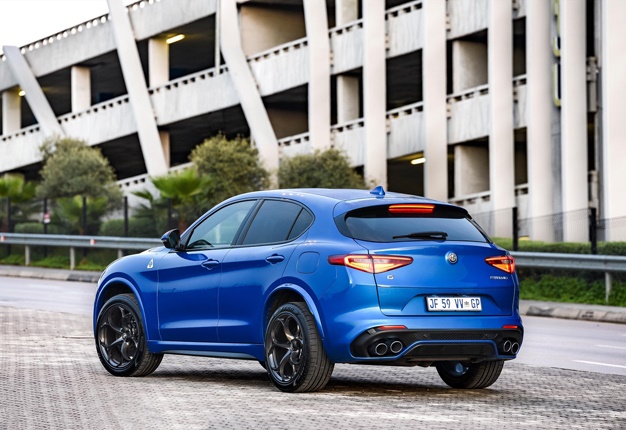 Two models make up the Stelvio QV range: the standard Quadrifoglio Q4 (R1.675-million) and this Quadrifoglio Q4 Race Edition (R1.825-million). In the grander scheme of things, it’s very easy to disregard the Stelvio QV against rivals such as the Mercedes-AMG GLC 63 S and BMW X3 M. But this Italian stallion can hold its own, despite the stereotypes around it.

While this SUV needs to do little to convince us of its credentials, it has a far greater task of convincing the buying public of its prowess.

The Alfa Romeo Stelvio QV is a properly good performance SUV. It’s just a pity it won’t be given a fair chance in SA. We live in a world where facts and fiction get blurred
In times of uncertainty you need journalism you can trust. For only R75 per month, you have access to a world of in-depth analyses, investigative journalism, top opinions and a range of features. Journalism strengthens democracy. Invest in the future today.
Subscribe to News24
Related Links
WATCH | The updated Alfa Romeo Giulia and the Stelvio SUV will be heading to SA in 2020
Alfa Romeo's stellar line-up at the SA 2019 Festival of Motoring
Next on Wheels24
REVIEW | New Land Rover Defender 90 D240 S an ode to the SUV's eternal spirit