REVIEW: Tackling gravel and mountain passes in the Suzuki Jimny

When you get to drive the new Suzuki Jimny for a week, you don’t say no. A ‘thank you’ is all that’s needed and to yourself, you pose the question: when and how far?

And so began simple plans to kick off Easter weekend with a decent drive to Robertson that includes gravel roads and mountain passes. It was imperative that we began the day early; taking in that morning sensation of a journey with friends. I had two of my friends join in the Jimny and another family man (who’s also a friend but with two toddlers) in a Volvo XC60.

For us, the day was about exploring and trying to see if we can also score some fish and a loaf of bread on the mountain.

Leaving the comforts of my warm bed at 5am is never a difficult task when there are cars and driving to be had. Once I had my camera bag and tripod in the Jimny’s boot I was ready to go!

The Jimny does not have much loading space to talk about. In fact, the boot is almost non-existent. But fold the rear seats down and you have a fair amount of space to play with. Soon after I collected my two passengers - both who are significantly larger than what I am. Throughout the day I had to endure their occasional complaints about the Jimny’s shortcomings in terms of space. It’s not my fault they’re tall and big, but hey... here we are! The chosen route to Robertson would require us driving through Wellington, over Bainskloof pass, through Ceres to Touws River, and Montague. Going straight from the N1 would have taken us no more than 90mins from our starting point, but the idea was to drive, find roads (gravel and tar), and to enjoy the Jimny.

One of my passengers tried to play around with the Android Auto and to no avail as he struggled to connect his device (some vehicles need an app downloaded for SA to get the function to work). It’s a good thing as I was not in the mood to listen to Judy Boucher or Bela Fleck and the Flecktones at 6am in the morning. We agreed, conversation alone would suffice.

In Wellington, we made a quick stop for coffee and headed over Bainskloof pass. It was cold and could we see that the ominous clouds predicted nothing but rain. It was still dark as we began scaling the Bainskloof pass. It’s a beautiful mountain road that was opened in 1854 and stretches for 18km. After plenty of quick sharp bends and a few hairpins, we suddenly drove into a thick bed of mist. We were blind! I checked the speedometer, noticing that we can’t muster anything over 20km/h.

The Volvo behind us kept his distance and quickly faded behind with only a spooky glimpse of its fog lights cracking through the thick mist. Once visibility improved we regrouped and the Volvo decided to shoot up ahead.

The Jimny is not exactly made for the open road and its shortcomings came through as we tackled Mitchells pass heading into Ceres. The little SUV’s engine, a 1.5-litre developing 75kW and 130Nm, had to work for its money. At 120km/h, in fifth gear and engine revolutions just under 4 000rpm, the Jimny struggled to maintain its momentum and soon I had to play with the five-speed manual gearbox in an attempt to not lose too much speed. 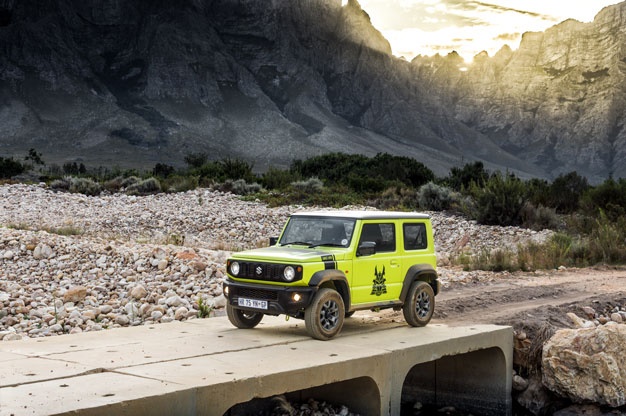 In Ceres, after catching up with our mates in the Volvo, we headed out to Touws River via a dirt road. It wasn’t part of the initial plan, but we could not pass up on the opportunity to drive the Swaarmoed pass. Finally, we hit some gravel roads and the Volvo in front soon left us in a cloud of dust.

This was the first time I had the experience of driving the Jimny on a dirt road where the speed limit is 100km/h. What a treat! This is where the Jimny wants to be. It wants to be dusty. Here it’s comfortable and smooth as butter. And it handles as a 4x4 should handle on a dirt road. Not long after Bo-Swaarmoed we found ourselves in Touws River; the half-way point. By then we had already travelled approximately 220km and set off again after a quick refreshment stop, and another diaper change for the parents with kids in the Volvo. We tried sticking to our initial route, but barely out of Touws River the prospect of another 44km-long gravel road could not be ignored. It wasn’t as well-maintained as the first one, but with its high ride height of 210mm and thin-looking, capable off-road tyres it was like a walk in a dusty park for the Jimny. It made us want to drive where ever possible and we yearned to go where we would not dare with our own cars.

The Jimny was made for adventure and we were having all of it! Dusty, sweaty, and hungry we finally reached our lunch spot, and final destination outside of Robertson.

The Jimny, parked at the entrance, had all eyes on it. I mean, who can’t look past that distinctive kinetic yellow body colour with its throwback Japanese looks and 'Giant Killer' stance. After a good day’s driving behind us, we reluctantly hit the road back home to Cape Town via the Franschhoek pass and also slipped into a few gravel sections for a few more snaps of the car. Dirty or not, the kinetic yellow paintwork popped.

After almost 590km, and with two adult passengers on-board, the Jimny made the journey memorable. I did feel a bit uncomfortable at times and the seats perhaps are not the best for long stretches, but the Jimny delivered.

There’s a saying in motoring circles that goes: a show car is not always a race car, but a race car is always a show car. And if we apply that to the Suzuki Jimny: this is an SUV that was designed to offer affordable fun at a very competitive price.

It’s far from perfect, but it’s tough. And it has the ingredients to make any journey memorable. We live in a world where facts and fiction get blurred
In times of uncertainty you need journalism you can trust. For only R75 per month, you have access to a world of in-depth analyses, investigative journalism, top opinions and a range of features. Journalism strengthens democracy. Invest in the future today.
Subscribe to News24
Related Links
CLOSER LOOK: 2019 Suzuki Jimny 1.5 GLX
Unlikely 4x4 battle: Can Suzuki's giant-slaying Jimny keep up with a Jeep Wrangler off-road?
Next on Wheels24
OPINION | Chery Tiggo 8 Pro - will it become SA's best-selling premium SUV in 2022?