Remember Daihatsu? The unassuming Japanese automaker and maker of the popular Sirion and Terios? Well despite officially leaving South Africa in 2015 the brand is still going strong globally, especially in its home market of Asia.

What does this have to do with Toyota SA? Well, the two Japanese automakers entered into an "emerging market agreement" and the first model from that partnership has arrived in South Africa - the new Toyota Rush.

Globally, the Rush is, in fact, the Daihatsu Terios "returned", the previous generation of which was available in locally in 2015. The new SUV will be sold globally.

The new Rush hopes to grab its share of the SUV market with its aggressive pricing, stylish design and practicality.

In SA however, the new Rush SUV, sourced from Indonesia, has more in common with its Avanza sibling and with which it shares a platform and its 1.5-litre petrol engine.

A single petrol engine variant is available though can be ordered in either manual or auto guise. And the price? The manual is priced at R299 900 while the four-speed auto model retails for R313 500.

Power is provided by a 1.5-litre four-cylinder engine with outputs of 77kW/136Nm. The engine can be mated to either a 5-speed manual transmission or 4-speed auto, driving power to the rear wheels.

Fuel consumption is rated at 6.6 litres/100km for the manual variant while the auto version has a claimed 6.7l/100km with CO2 figures of 156g/km and 158 g/km respectively.

The engine is sprightly largely due to the transmission’s short ratios which poses its own problems on the road; the manual gearbox is in dire need of a 6th gear, as you’ll soon hit peak rpms, doing little to promote fuel consumption and reducing engine noise.

The Rush is designed to handle the rigours of city life and feels rather nippy, with a composed ride and capable suspension. It’s surprisingly good off the beaten track too, capable of tackling on gravel roads with its 220mm ride height but it is by no means an off-roader. There’s loads of feedback from its electric steering, making parking a breeze despite its dimensions. Ride quality was fair even traversing the rutted sections of the Ado Elephant park near Port Elizabeth.

Overall, it’s a pleasant enough vehicle at moderate speeds and will see its occupants arrive at their destination in relative comfort.

At the launch of the new @Toyota_sa Rush - the first model from the new #Toyota / #Daihatsu partnership. This Indonesia-sourced #SUV should do very well in #SA. #rushsquad #rush @wheels24_sa

The design of the Rush borrows heavily from its Fortuner sibling, with its large horizontal grille slats, LED headlights and a body-colour spoiler. Inside, it borrows elements from the Fortuner and current Avanza. The centre stack carries a six-speaker audio system compatible with Bluetooth, Android Auto Plus Show and Apple CarPlay, controlled via an 18cm infotainment touchscreen, auto aircon, a USB port a 12V socket. It's fitted with rear-parking sensors, a rear camera, satnav, hill hold, stability control and six airbags are standard. Compared to the larger Fortuner, the plastic bits are coloured in black (as opossed to beige) and the upholstery is black fabric.

The Rush is well packaged, offering loads of head- and legroom for all passengers and a family-pleasing huge cargo bay; boot space is rated at a stupendous 609-litres (in Indonesia it boasts a third-row of seats) and the SUV seats 5. 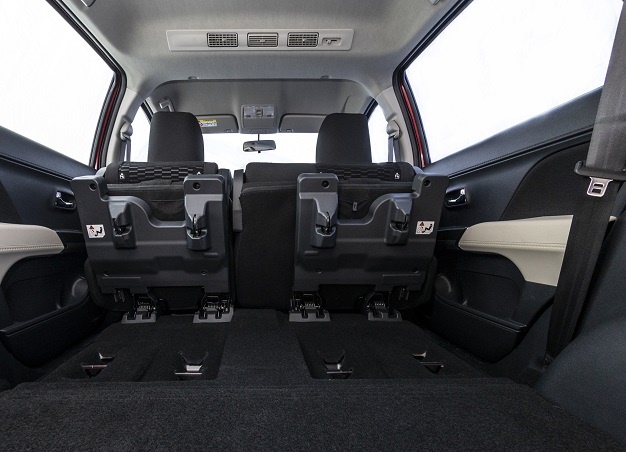 A big gripe is a lack of a parcel shelf, essential in South Africa for keeping the contents of your boot hidden. The SUV also lacks privacy glass. The fit and finish of the cabin is adequate for its price point even with faux-stitching along the dashboard and door panels. What about the Avanza?

The Rush is larger than the Avanza; It is 35mm wider, 10mm taller, 295mm longer and has 30mm longer wheelbase. Toyota has set its sights on dominating the compact SUV market with the addition of a second Avanza-based vehicle into the segment. The target market? South African motorists seeking a family-friendly 5-seater in need of more boot space than car seats.

The boot is by far one of the biggest you’ll encounter in its segemnt. Should you require more space than its voluminous confines can offer,  the seat can be folded down. I wish it came with a sixth gear as the noise level while cruising at highway speeds is very high. A minor gripe is that those seeking an extra row of seats are unable to do so.

Overall, with a price-tag below the psychological R300 000 mark, it’s a well-specced and capable family SUV that should give direct rivals (read: Honda BR-V) and more expensive crossovers a run for their money – Toyota predicts 200 units a month. We live in a world where facts and fiction get blurred
In times of uncertainty you need journalism you can trust. For only R75 per month, you have access to a world of in-depth analyses, investigative journalism, top opinions and a range of features. Journalism strengthens democracy. Invest in the future today.
Subscribe to News24
Related Links
Gallery: 2018 Toyota Rush
Toyota debuts stylish Rush SUV: Here's how much the 'baby Fortuner' costs in SA
Next on Wheels24
OPINION | New sketch of 2022 VW Amarok makes us want one even more