Small it may be, but the Suzuki Jimny still holds the world record for the highest altitude attained by a four-wheeled vehicle, set in 2007 by two Chileans at 6 688 metres in the Andes. But can it conquer Mount Everest? Ferdi de Vos undertook an arduous journey to find out …

The new Suzuki Jimny, the first to be launched in two decades, has very big tyre tracks to follow. Not only did its predecessors create a market segment for compact, affordable, capable and – most importantly – fun, off-roaders over a period of 40 years, it also still is the holder of the world record for the highest altitude reached by a four-wheel drive vehicle.

READ: Suzuki's giant-slaying Jimny driven: Could this be the toughest little 4x4xfar?

This record was set by the Chilean pair of Gonzalo Bravo and Eduardo Canales on 21 April 2007 when they drove their modified Suzuki SJ413 Samurai up Ojos del Salado in the Andes. Their little Jimny benefitted from bigger wheels and tyres and suspension changes, as well as a supercharged G16A four-cylinder engine. 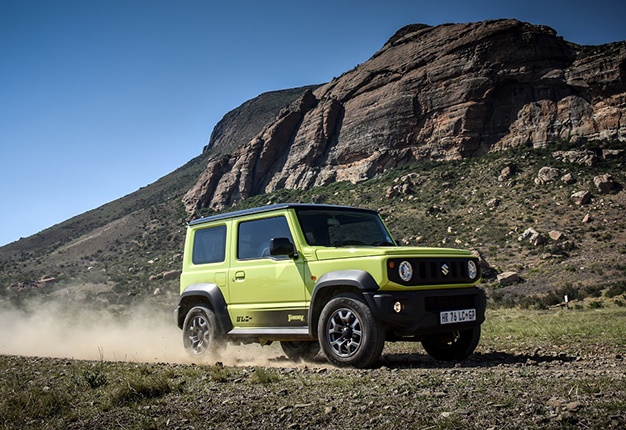 It was their third attempt, as they encountered weather problems on the first attempt and an engine fire on the second, but the Chileans passed the previous record, established by a Jeep at 6 646m, setting the new record height at 6 688m. (By comparison, Mount Everest has an elevation of 8 848m.)

They also found part of the sign left by the Jeep team reading "Jeep Parking Only: All others do not make it up here anyway" and brought it back down as a souvenir. Their record was certified as a Guinness World Record in July 2007.

So, how do we prove that the latest ladder-framed, low-range equipped Jimny, only the fourth all-new model since the original LJ10 was launched in 1970, is better than all its forebears? Well, in our opinion there was only one way to do this... by conquering Mount Everest.

To surmount Everest is easier said than done, and we faced a couple of serious challenges. We did not have the luxury of months of planning and preparations or the means to modify the bright green (yellow?) Jimny entrusted to us. So, we had only one shot at this. But we had a plan; one that did not necessitate us travelling all the way to Nepal. You see, if you look at the map of South Africa, specifically at the Free State Province, you will find our own Mount Everest, neatly nestled between Verkykerskop and Eagle Mountain, about 20km from Harrismith … So, we packed our bags and grabbed our gear, filled up the luminous green Suzuki, and set off on our mission. Mount Everest, here we come!

We left Gauteng late afternoon in the long-awaited newcomer with its bold, angular styling, and took the N3 highway towards Durban. Looking closer, one could see the signature elements that pay homage to its forebears, such as the round headlights and separate round orange indicators of the LJ10, and the side bonnet slits and angular front windscreen from the SJ series.

The clamshell bonnet and upright grille, as well as the moulded rear bumper and lights in the furthermost corners,  are reminiscent of the SJ and previous generation Jimny, but the newcomer also has some unique features, such as a full drip rail around the roof, for the easy fitment of roof rails and other accessories. From behind the steering wheel, one could see further hints of its forerunners, including the exposed painted metal window frames at shoulder height, the separated square speedometer and tachometer binnacles, and the three-layer fit-for-purpose dashboard with many storage binnacles.

It was quite spacious too, with 30mm more legroom in the front and 40mm extra at the rear, and the 55mm longer front seats with wider cushions and 240mm sliding range, proving very comfortable on our long drive.

Our GLX also had a large seven-inch touchscreen with audio, Bluetooth, and Apple CarPlay compatibility (Android will be available later), but no satnav. This was not really a problem since we used our Land Rover Explore smartphone to navigate and track our way towards Mount Everest.

Byway to base camp

Now fitted with the new Suzuki K15B 1.5-litre, four-cylinder petrol engine in place of the 1.3-litre M13A engine of the previous model, coupled to a slick five-speed manual gearbox, the Jimny felt pokier than before, easily maintaining highway cruising speed.

The bigger yet lighter engine delivers 75kW at 6 000rpm and 130Nm at 4 000rpm, and it only really struggled to maintain momentum on some of the long uphill stretches between Warden and Villiers. It was also more frugal, but the big question was still: ‘did it have enough grunt to overcome the steep slopes of Everest?' By now we were close to Harrismith and in the dark we missed the first (hard to see) turn-off onto the S1204 gravel road. Luckily, we did see the well-signposted turnoff for the R722 toward Verkykerskop. We followed this tarred road for about 13km until it crossed the S1204, signposted Mount Everest, and turned right onto the dirt road.

Built on a new ladder-frame chassis with an X-member between the two rigid axles the new Jimny has 1.5 times the torsional rigidity of its predecessor, and it was immediately evident on the gravel. With the front and rear track increased by 40 mm and vehicle width by 45mm (but 50mm shorter overall), it also felt more stable. But it is worth remembering that the (short) rear-wheel driven wheelbase of the Jimny is unchanged at 2 250mm. This means it can quickly become unsettled at the rear at speed on rough dirt roads, and then deft hands are needed to keep it on track.

We followed the road for another five kilometres before reaching the entrance to Mount Everest Game Farm, for some time also known as Eagle Mountain, next to large, thatched gateway in a clump of trees. Once through the gate, we followed the track up to the homestead where we were met by Petrus Weyers, owner of the game farm and resort.

The affable Petrus gave us the keys and showed us to our chalet at the foot of Eagle Mountain. On our climb up towards our overnight accommodation, we engaged the AllGrip Pro 4×4 system of the Jimny for the first time. We have made it to base camp …

We were up before sunrise the next morning and were greeted by a dramatic and beautiful landscape with a sweeping vista of the mountains and endless plains. We quickly set up for a photo session under the constantly changing skies before heading off to meet Petrus, who much like Tenzing Norgay would act as our "Sherpa guide" for our Everest assault.

He gave us a quick overview of the mountain-scape, pointing out the prominent landmarks such as Eagle Mountain, with its unmistakable eagle’s head profile, Verkykerskop, at 2 044m one of the highest points in the area, and Mount Everest, safely nestled between the two. The area is a heaven for rock climbers, with about 140 fully bolted sport routes at Mount Everest that range in grade from 7 to 29 – perfect for beginner and moderate grade climbers. The rock is sandstone, he explained, younger and softer than the quartzites of the Magaliesberg or the Cape, with weird and wonderful shapes. It is highly variable, from somewhat loose shale to perfectly solid and smooth walls, and even dolerite, with dozens of walls and boulders still unclimbed.

Petrus then showed us a track leading towards the neck between Verkykerskop and Mount Everest (he was not sure how the mountain got its name but speculates that from a certain angle it looks like the real Everest) and suggested we use this as starting point for the ascent.

So our Jimny-onslaught on Everest began. Engaging low-range we cautiously tackled the first slope, the rigid axles, new coil spring and shock absorber configuration and 210mm ground clearance – 20mm higher than before – helping the diminutive 4×4 to clear seemingly insurmountable obstacles.

Like a klipspringer, it literally jumped from rock to rock, and in less than 15 minutes and minimum effort, the Jimny scaled the first steep incline, straddling the saddle between Verkykerskop and Everest. Its rate of ascent was truly impressive. “Wow, I would never have thought this little ’un is so capable off-road," a surprised Petrus said.

However, the biggest challenge was still lying ahead – a long and steep gradient up Everest itself. The 1.5-litre engine worked hard up the hill, but never felt stressed, and assisted by vehicle stability control (ESP) and a new brake-enabled Limited Slip Differential system the Suzuki climbed over loose boulders and rocks with ease.

Slowly progressing up the slope the Jimny looked like a bright green little beetle gingerly clinging on to the side of the mountain, the integrated Hill Hold Function keeping it steady on the angled incline while it edged ever upwards.

More than halfway up the mountain face things started to become dangerous; in part due to the acute slant, but mostly because of loose boulders and rocks unexpectedly giving way. This could cause damage, a big slide, or even a roll-over, and as we were not equipped for such an eventuality, I considered it too risky to continue.

After a last view from just under the crags over the spectacular Highveld plains, we slowly descended, using the Hill Descent Control to good effect. However, the point was proven. By conquering Everest the small Jimny convincingly showed what it is capable of. We live in a world where facts and fiction get blurred
In times of uncertainty you need journalism you can trust. For 14 free days, you can have access to a world of in-depth analyses, investigative journalism, top opinions and a range of features. Journalism strengthens democracy. Invest in the future today. Thereafter you will be billed R75 per month. You can cancel anytime and if you cancel within 14 days you won't be billed.
Subscribe to News24
Related Links
SEE: Edgy new Swift, tough little Jimny drive Suzuki sales in SA
Wow, what a good month for Suzuki's little giant-slayer! All-new Jimny 4x4 bumps sales up by 104%...
Next on Life
WATCH | Muscular proportions, exceptional attention to detail - new Range Rover Sport now in SA