• Ford's new Ranger FX4 has been launched in South Africa.

• The Transkei and Wild Coast played host to the bakkie's local debut.

• The FX4 is based on the Ranger XLT.

One of life's greatest joys surely must be to travel. Whether you're just exploring your immediate municipal area, city, or the greater province, finding new roads and exploring the previously unknown has to rate up there with the best. But when the opportunity to traverse across a South African region, you sign your name on the dotted line and report for duty. ASAP.

To herald the arrival of its new Ranger FX4, Ford South Africa used the Wild Coast in the Eastern Cape as the launch venue. The luscious greenery and humid conditions created an almost perfect setup for the bakkie, and all the while, you are well-aware of just how special it's about to get.

We arrived at King Shaka International airport quite early the day, followed by a brief drive to one of the smaller airfields just outside a hot and humid Durban.

Soon we boarded the 14-seater, got airborne and made our way to the Wild Coast. We're only a (maximum of) 1000 feet above sea-level, but never too far from land. And the views, quite frankly, are majestic! The terrain changes with each passing minute, yet the tropical vegetation remains intact. This was the case all the way to the Eastern Cape, and even more when we touched down on a private airstrip on an exquisite mountain outside Port St. Johns.

Taking a moment just to process where you are, it becomes abundantly clear you're about to experience the legendary and breathtaking Wild Coast. 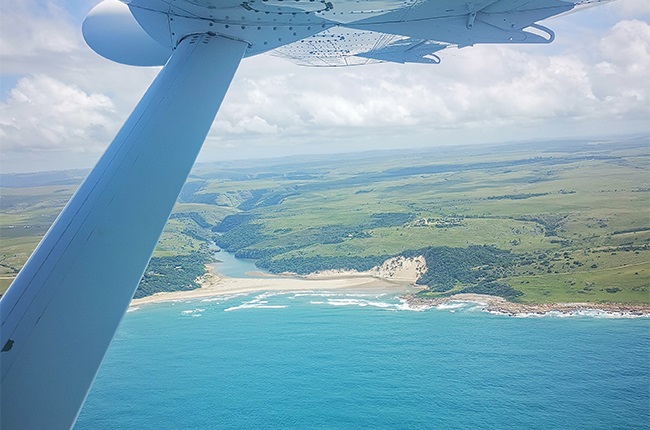 As we disembark the aircraft, several new Ford FX4s are parked near the welcoming tent. The FX4 badge is no stranger to South Africans and the local market, having been introduced here in 2017 as a special edition model. The 2021 variant is no different and is the second special Ranger to enter the market since the Thunder's introduction in August 2020.

The FX4 slots between the Ranger XLT - on which it's based - and Ranger WildTrak in Ford's bakkie line-up, but borrows several bits and pieces from Ford SA's parts bin. The grille, for instance, is the same black one used on the Thunder, bar the red nostrils. The black theme is standard on the bakkie, too, with the mirrors, door handles, and 18-inch alloy wheels all decked in this colour.

The cabin sees the same red stitching on the seats and dashboard as you'd find in the WildTrak and Thunder, along with leather touches to the steering wheel and gear lever. Soft-touch materials adorn the dashboard. FX4 logos are found on the front seat and outside on the front doors and the tailgate.

The FX4 is available in double cab guise only, with both a 4x4 and 4x2 model on offer. Both bakkies are powered by Ford's single-turbo 2.0-litre diesel engine (132kW/420Nm) that is mated to the automaker's 10-speed automatic gearbox. After an early lunch, the contingency set off on the journey's first leg into the unknown. The bakkies, all in tow, make their way down the mountain into Port St. Johns. Words fail to describe the sheer state this once renowned city is in. Roads, both in the city and surrounds, are in horrendous conditions with potholes everywhere you look. Poverty runs rampant here, and I could not shake the feeling that our government has almost forgotten about the Transkei.

It's damn unfair that an area so beautiful must suffer under the demolishing hand of scarcity and shortage. But the friendly faces of adults and children on the sides of the roads welcoming you to their area proves that the hardships they're confronted with have done nothing to diminish their humanitarian fire. It humbles you.

We continue into the more forestry areas around Port St. Johns, venturing further away from civilization. Several kilometres later and we're approaching a massive cliff overlooking the ocean. On the one end, giant rocks are the final resting place for the onslaught of waves, while on the other, a blissful beach lay quiet and tranquil. These are the type of sceneries you only see in movies, and you embrace that #ProudlySA feeling sweeping across your body.

The road we came by posed tough questions to the Ranger FX4, but the bakkie is equipped with the impeccable off-road credentials and driving dynamics its siblings are known for. Switching from 4x2 High to 4x4 High can be done while the bakkie is in motion, and drivers can feel the bakkie's surefootedness increase on slippery sections. At one point, we had to engage 4x4 Low and activate the rear differential lock, which made crawling out of the deep ditches child's play.

And on the sections where throttle modulation could be an issue, a simple press of a button activates hill descend control - regulating the bakkie's speed and braking automatically as steering away from obstacles becomes the driver's primary focus. The Wild Coast and broader Transkei have to count among South Africa's gems. The area is still mostly untouched and offers the most memorable experiences you're likely to find anywhere. But more, it was the perfect setting where to get acquainted with Ford's latest bakkie. The FX4 does not venture from the tried-and-tested recipe that made the Ranger such a popular choice among buyers, instead adding to the bakkie's already impressive resume.

It does everything right in a package that will give prospective buyers the sense that they've bought into something not many bakkie owners will own once the FX4's production has come to an end.

And Transkei? While it must, seemingly, be satisfied with the crumbs falling from the government's top-heavy table, nothing can detach it from the beauty it finds itself in. It's a sad situation, but few will argue against the value it adds to our country, much like the home-built Ford Ranger. 2021 Ford Ranger FX4 in Transkei
Ford South Africa
We live in a world where facts and fiction get blurred
In times of uncertainty you need journalism you can trust. For only R75 per month, you have access to a world of in-depth analyses, investigative journalism, top opinions and a range of features. Journalism strengthens democracy. Invest in the future today.
Subscribe to News24
Related Links
WATCH | Hilux vs Ranger - SA's top-selling bakkies go head-to-head
Ford expands local bakkie lineup with the introduction of new Ranger FX4 in SA
WATCH | Ford Ranger Thunder crossing the Breede River via ferry at Malgas
Next on Wheels24
Order books now open: Volkswagen's electric ID.4 to go on sale in these markets