• Priced from R519 900, the SUV aims to set the bar higher with its list of standard features in its segment.

Hyundai South Africa could finally launch its all-new Tucson in the country. As was the case with many automakers, Covid-19 and the global microchip shortage hampered vehicle production, delaying its introduction to many markets - including ours.

And justifiably, Hyundai SA is gleaming from ear to ear to officially release their new halo SUV in the country. Now, if you read 'halo' and wondered if the Tucson is the latest product topper in Hyundai's South African stable, let us explain.

The Tucson has always been Hyundai's best-selling SUV in our market. Every month it is one of the Korean automaker's leading models, and it is the same on a global level. In that regard, the automaker refers to it as the 'halo' model because of the favour it always finds with customers. Hyundai, again, believes that the new Tucson will continue to set the trend of its forebear, of which more than 15 000 were sold in South Africa between now and 2016. 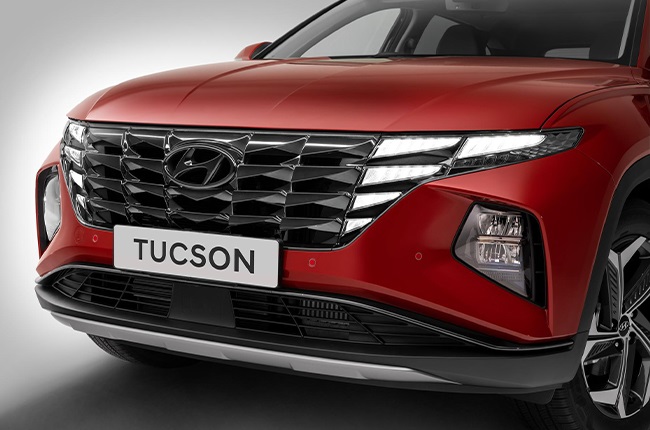 On paper, the new Tucson is not that much bigger than its predecessor, but the small gains it made in size translated to a roomier cabin and a greater sense of space. The 2022 model boasts a length of 4 630mm (+150mm), a width of 1 865mm (+15mm), and a height of 1 665mm (+5mm). In addition, the engine's position has also been pushed slightly forward to enhance the roominess.

And though this bodes well for occupants, the new model also boasts 51-litres of extra boot space to now offer 539 litres. The rear seats can split in a 60:40 configuration to further increase the loading area.

The new Tucson has several aesthetic cues about it, including the chrome coated beltline that runs from the A-pillar to the C-pillar, ending off just above the rear LED lights with their unique design. One of the prominent standout features of the 2022 Tucson is the new daytime-running LED lights at the front. Incorporated into the grill, they gift the SUV a unique design and instantly make the new kid on the block stand out.

And yes, people stare and glance for a second look.

On the Executive and Elite models, the grill is finished in a dark chrome to enhance the feeling that these are the more upmarket models over the Premium. The new Tucson is available in seven exterior colours, and each specification-grade rides on a different alloy rim: 17-inch (Premium), 18-inch (Executive), and 19-inch (Elite). A panoramic sunroof is standard on the Elite model. Hyundai went to great lengths to improve the new Tucson's interior over the previous model. Sitting in the front, occupants will feel that they're cocooned inside the SUV. This feeling is accentuated by how the door panels merge with the dashboard. Small details include the trimline just below the window that blends with the same line on the dash.

The steering wheel reminds strongly of the Staria's, in essence adopting Hyundai's new design language for the one item that connects the driver to the front axle.

While Apple CarPlay and Android Auto can be operated wirelessly, the new multimedia system is a bit of a mixed bag. On the one hand, it adopts a contemporary look, while on the other, the default design of the home screen is archaic. It is a bit of a letdown compared to the other information displays, especially when viewed directly against the intuitive information display ahead of the driver.

Standard features across the range include: Hyundai opted to keep its new Tucson offering small and uncomplicated for the South African market. As such, two engines are on offer, each driven by a six-speed or eight-speed automatic transmission, sending power to the front wheels. The three petrol models are powered by a 115kW and 192Nm petrol model, while the diesel churns out a gritty 137kW/416Nm.

Only diesel models were available for sampling at the launch, and the new SUV indeed showed its enhancements over the previous model.

Floor the throttle and the engine wastes no time as it channels power to the road. There is a great sense of urgency as to how the powertrain reacts to throttle inputs, and the eight-speed gearbox, exclusive to the diesel, cogs over without missing a beat.

Thanks to an inclined strut bearing and new damper valves, on-road mannerisms have also improved. The front and rear suspension is also enhanced, giving the SUV a ride quality that puts clear daylight between it and its predecessor. The uprated driving characteristics of the new Tucson is sure to impress, and should prospective customers find this to be one of the SUV's greatest strengths.

The new Tucson is undoubtedly a massive improvement over the previous model. From the front to the rear, inside out, it is leaps and bounds better than before and will it indeed speak to a broad audience. And Hyundai's decision to keep the line-up small and omit an AWD model is because of what the target audience wants.

Coming up against rivals like the Toyota Rav4, Volkswagen Tiguan, and Nissan X-Trail, the Tucson proved that it could keep up - and at times run - with the best the industry has to offer. The new model is a vast improvement and sets a new standard for what an SUV in this segment should provide as standard equipment.

It's not perfect, but it's a damn lot better than most.