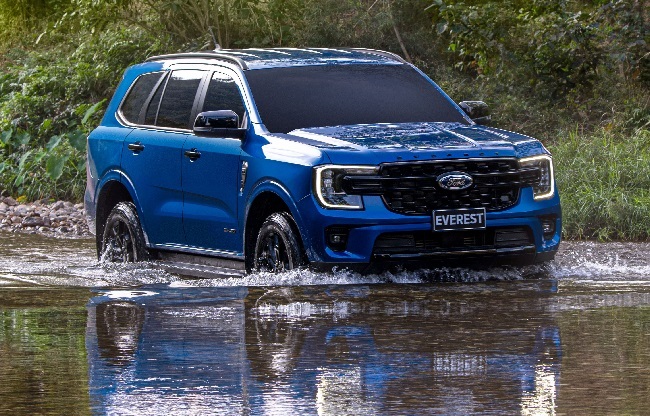 • Ford reveals the third generation of its Everest seven-seater SUV.
• Design is similar to the new Ranger and, by implication, the latest F-150.
• It should be much easier to load – with a lot of your adventure and touring gear.
• For motoring news, go to Wheels24.

This new SUV has similar C-shaped LED headlights to Ranger, with a bold overall design – underscored by optional 21-inch wheels.

If you are obsessed with all things Ford Everest, you'll notice the rear windows and tailgate glass area have increased. Ford has done this with the specific purpose of increasing ambient light inside new Everest.

But doesn't a larger glasshouse mean more greenhouse effect if new Everest is left standing in the Karoo or Limpopo sun on a hot day? Using the most sophisticated tints and cabin materials, Ford ensures that you get the most generous allocation of ambient light without all the heat. Ford's designers and engineers have done a lot of work on the new Everest's tailgate. It opens to a much larger aperture, creating safer head clearance for tall people when accessing the rear cargo area.

The tailgate's taller arc of opening also makes for an even more convenient shaded space on your road trip when you enjoy a food and beverage stop.

Everest's rear cargo area also features what Ford calls the 'apple catcher'. This is a simple plastic lip, shaped as part of the bottom trim, preventing items from rolling out of the load area when the tailgate opens on an incline.

With those C-shaped headlights and a new full-length LED taillight section, illuminating is a notable theme within new Everest's design. You can fiddle with tiny LED headlights and Smartphone torches all you like, but the convenience of controllable parked vehicle lighting is terrific when camping or touring.

What do you think of the all-new Ford Everest? Please share your thoughts in the comments section at the bottom of this article.

Ford will offer a static zone-lighting feature with the new Everest, controllable with a smartphone app or the vehicle infotainment system. Although Everest has grown larger and can carry more inside, there will always be the requirement for roof-loading with any SUV.

Two roof rail designs are available with the new Everest. Ford claims an impressive 100kg dynamic load rating for the roof – although using that full 100kg capacity will undoubtedly influence the vehicle's centre of mass.

The static mass rating of 350kg is perhaps even more useful, ideal for roof tent overnighting. New Everest is easily capable of having four adults camping on its roof.

As expected, engines will mirror the new Ranger.

The proven 2.0-litre turbodiesel four-cylinder option is in both single- and bi-turbocharged configurations. And Ford's exciting new 3.0-litre turbodiesel V6 is sure to find favour with those Everest owners who require high-speed cruising and potent overtaking ability.

The new Everest platform benefits from a 50mm wider tracking width and wheelbase. Although that will make navigating it into tight parking spaces a touch more challenging, the dynamic driving benefits should be worthwhile.

Any increase in wheelbase benefits passenger comfort and increases high-speed cruising stability. One can understand the engineering team's logic regarding the 50mm greater spacing between the axles and opposing wheels. Considering the potency of Ford's new V6 turbodiesel engine option, that's a good thing.

The wider track should make the new Everest even more stable when cornering and give it a touch more individual suspension travel at all four-wheel corners.

Safety? A notable upgrade is an additional airbag between the front passengers.

We live in a world where facts and fiction get blurred
In times of uncertainty you need journalism you can trust. For 14 free days, you can have access to a world of in-depth analyses, investigative journalism, top opinions and a range of features. Journalism strengthens democracy. Invest in the future today. Thereafter you will be billed R75 per month. You can cancel anytime and if you cancel within 14 days you won't be billed.
Subscribe to News24
Next on Wheels24
Geely's RD6 Radar double-cab could change the bakkie market