REVIEW | Renault Duster 1.5 dCi Dynamique: The only 4WD in the updated line-up

• The Renault Duster has been on sale locally since 2013.

• The SUV garnered a strong following, with more than 21 000 units sold in South Africa.

For the last eight years, Renault's Duster has been a revelation to the local market. Back then, with a starting price of under R200 000 (geez, that sounds like a lifetime ago!), the SUV impressed from the get-go, and it found favour with thousands of buyers. It was a stroke of genius for Renault because it reignited something in the South African consumer looking for a robust vehicle that you won't feel too bad about if bushes and brushes scrape against it.

And though the SUV saw minimal changes to its design and outlook on life, it received alterations and updates, nonetheless. Renault adjusted the Duster's package with each update, and increasing and enhancing each model's safety features.

In 2020, the Duster saw more slight updates, with the line-up being adjusted and reevaluated. This meant that only five models make up the local Duster family, and only the only 4x4 model being the 1.5 dCi Dynamique 4x4 in manual guise.

Renault has genuinely made the Duster one of the leading vehicles in its segment when it comes to technology. Before Apple CarPlay and Android Auto became regular additions to new vehicles, including the new Duster, this SUV was fitted with a multimedia system that featured Bluetooth, USB, and AUX capability as satellite navigation. Now, with the addition of Apple CarPlay and Android Auto, it is far easier to connect your smartphone to the SUV's multimedia system.

READ: Here's how Renault improved on its Duster's success recipe since September 2013

Other notable features include the climate control that can be adjusted automatically, cruise control and a speed limiter, as well as a rear-view camera with rear park distance control, and hill start assist.

Given that this is the 4x4 model, drivers can toggle between 4x2 and 4x4 using the front seats' rotary dial. In 4x2, the Duster drives through its front wheels, which helps improve fuel economy. The 1.5-litre turbodiesel engine is a rather punchy motor. Producing 80kW and 260Nm, the 4x4 manual Duster has ample low-down grunt and torque, with strong pulling abilities. Setting off, one quickly realises that the first gear is a relatively short one, which will come into its own more in off-road conditions where it makes up for the lack of low-range. As such, pulling in away in second gear is like second nature to the Duster.

The manual gearbox cogs over without hassle, with the clutch feeling ideally weighted with each engagement.

Renault claims a fuel return of 4.8-litres/100km on the Duster 4x4 manual.

Do you have any experience owning a Renault Duster? Email us your story or use the comment section below. 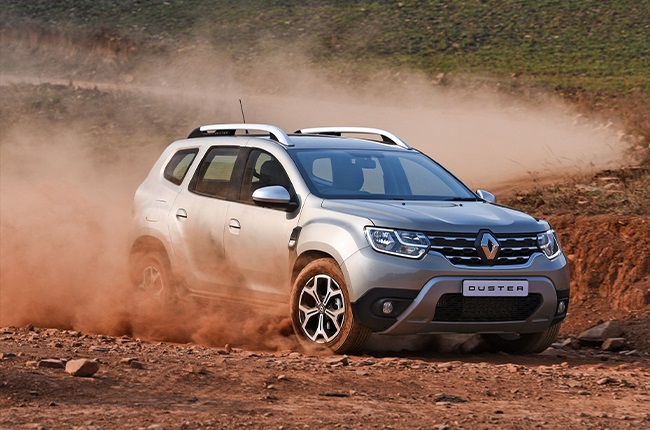 As alluded to earlier, the Duster came to market as an affordable alternative to owning an SUV. It had a simple exterior design with a relatively robust interior. And speaking of the cabin, Renault wasn't too concerned with the rampant use of plastic. It is a simple recipe that drew the attention of more than 21 000 buyers since 2013.

Truth be told, though, the Duster has seen its price increase over the last eight years, which is understandable given market conditions and inflation. But through it all, Renault South Africa maintained that the Duster must be an affordable proposition. Compared to its rivals, the Duster's package is as comprehensive as they come, with all the latest and newest technologies added.

The updated 2020 model continued the forebears' trend, but with a few extra bits and pieces to justify its price. New 16-inch wheels have been to this Dynamique model, along with the already familiar roof rails. Though 'affordable' is subjective, Renault has managed to keep the Duster's pricing competitive compared to its rivals.

Renault has gone to great lengths to improve the Duster's recipe and has done so without veering away from the formula. The SUV continues to impress with a compliant ride quality, tech-laden interior, and brawny exterior. It succeeds in its tasks and has little to no qualms about its place in the South African car parc.

The Duster comes standard with a five-year/150 000km mechanical warranty and a six-year anti-corrosion warranty. Services are due every 15 000km or 12 months, and a standard three-year/45 000km service plan applies.

We live in a world where facts and fiction get blurred
In times of uncertainty you need journalism you can trust. For only R75 per month, you have access to a world of in-depth analyses, investigative journalism, top opinions and a range of features. Journalism strengthens democracy. Invest in the future today.
Subscribe to News24
Next on Wheels24
Nissan's new 319kW Patrol SUV gets sprinkled with Nismo goodness