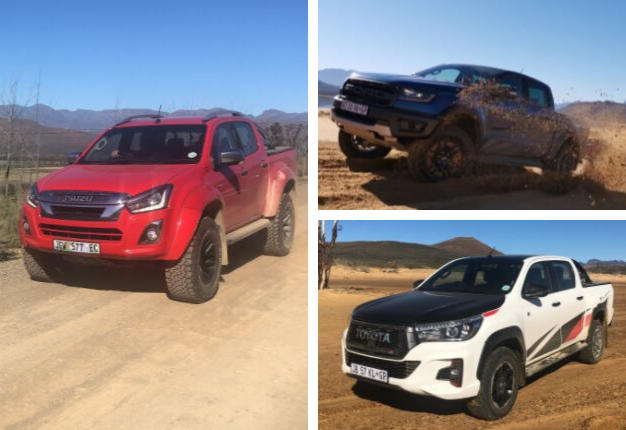 In the second half of 2019, we reported on three very special bakkies.

The Ford Ranger Raptor, Isuzu Arctic AT35, and Toyota Hilux GR Sport all came up against each other in what turned out to be a very spectacular, and interesting, test.

Of all the bakkies, the Raptor was the most anticipated one of 2019. The Raptor name has a revered reputation, which only made its arrival that much more enticing. The Hilux GR Sport is less familiar, and also the newest name here.

The Arctic AT35 is built to the stringent specification of Arctic, an Icelandic company responsible for some serious all-terrain conversions.

The test at the Klipbokkop nature reserve wasn't so much to see which bakkie is the best, but rather to establish what each bakkie had to offer.

Which of these three bakkies would you prefer to own, and why? Email us.

All three bakkies are built on existing platforms, but they feature upgraded suspension and vastly improved off-road capabilities. Each offering is unique in its way of going about their business, which somewhat defeats the purpose of trying to establish which is best.

In the Ranger Raptor's case, it was brilliant on the reserve's long gravel straights. In this enclosed environment, away from the public, the Raptor easily reached 160km/h, portraying exceptional road-holding and sure-footedness.

The Arctic AT35 continues with the tried-and-tested 3.0-litre engine as the rest of the D-Max range, but it feels far less responsive than the units in both the Raptor and GR Hilux. Engine aside, the bakkie has no trouble traversing over sand dunes and through mud puddles. This is, in no small part, made possible thanks to the massive off-road tyres.

It may not seem as if the Hilux GR Sport is that much different to the standard Hilux range, but Toyota says that the bakkie's front suspension has been upgraded. During the 2019 test, we could not determine just how much of a difference the 'revised suspension' made, but the bakkie instilled the greatest confidence from behind the wheel. For the simple reason that it's a Hilux and you could predict with precision how the bakkie would react to driver inputs. If I had to choose…

While all three bakkies have their strengths and weaknesses, if I had to take one home, it would be the Ford Ranger Raptor.

Both on- and off-road manners are pretty damn good for a bakkie, and the FOX suspension has turned the bakkie into a capable all-rounder. There is almost no tyre noise being kicked up, and the cabin is reasonably quiet at speeds.

At R849 900, the Ranger Raptor is anything but cheap, but you are attaining one of the most capable bakkies on sale in South Africa today. We live in a world where facts and fiction get blurred
In times of uncertainty you need journalism you can trust. For only R75 per month, you have access to a world of in-depth analyses, investigative journalism, top opinions and a range of features. Journalism strengthens democracy. Invest in the future today.
Subscribe to News24
Related Links
WATCH | These four boys got a ride to their new school in a Ford Ranger Raptor and it made them...
Isuzu AT35, Hilux GR Sport, Ranger Raptor - Hyped-up special bakkies: Do they live up to it in SA?
Next on Wheels24
Mahindra brings its new off-road Scorpio S11 Adventure SUV to SA in limited numbers