• Wheels24 reader Guy Boardman has owned several 4x4 vehicles in his life.
• He shares his views on the Ineos Grenadier and the new Land Rover Defender.
• Boardman doesn't think the Grenadier will do as well as the old 'Landies'.
• For more motoring stories, go to Wheels24.

In my lifetime, as a 67-year-old 4x4 enthusiast, I think my opinion has some merit on the Ineos Grenadier and the Land Rover Defender.

The Grenadier looks like the Defender Land Rover should have built, not the current "thing" that they have thrust on the market that doesn't even resemble the Icon that the Land Rover Defender once was. Does Land Rover really believe they will gain market acceptance from the buying public for a vehicle that does not even look like an icon? It also comes in 37 different variants, three different engines, and the most affordable Land Rover comes in at over R1-million. The top of the range Defender costing R1.7 million for a 2.0-litre motor developing 297kW at 5500rpm and 640Nm of torque through some complicated hybrid electric drive.

They have completely lost contact with the real world of 4x4, especially when comparing the Defender with the Discovery, the Range Rover Sport, and the Evoque. The only reason they could have done this is that they will drop some of those other ridiculous names like the Evoque and then maybe the Discovery as well. But enough about Land Rover. The real Land Rover Defender died when they fitted BMW engines and some of the German automaker's crazy technology.

With the Grenadier, Ineos has also gone to BMW for their engines when they should have gone to Toyota.

Ineos have their concepts right, but maybe some of their choices wrong:

• A wheel at each corner: it creates space in between, and approach and exit angles are always better.
• A ladder frame chassis: it simplifies construction and repair, and maintenance.
• A solid front and rear beam axles, because independent suspension can allow an engine or gearbox to bottom out when  braking on harsh terrain, and do not do too well when climbing rocks.
• A big six motor because that generally produces enough torque, but BMW? No, thank you.
All the speed, all the power but no reliability; IMHO they would have done better with a Toyota 1HZ donkey cart engine. Makes you think why Toyota has never dropped its 1HZ. Reliability, absolutely essential that is what has made Toyota the world's leading brand.
• Easy to work on/repair, because that is what 4x4 people are and what they do: they do things themselves and sometimes HAVE to do things themselves when they invariably run into a problem in the bush. Where will you find a bush mechanic capable of repairing a BMW engine when driving through Africa? Obviously Ineos were probably also stuck with only certain engine choices and the BMW engine would have been the best available, since Toyota would certainly not be providing a direct market competitor with its own engine. 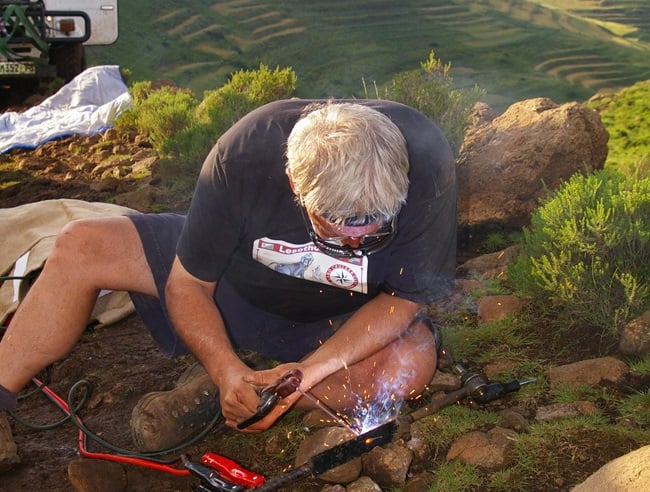 So there you have it. The die-hard Land Rover Defender fanatics will most likely migrate to the Ineos Grenadier, but when it fails because of BMW's hi-tech technology, the Defender lovers will turn their back on the Grenadier.  The price will be significant because if it does not beat the Toyota range of vehicles such as the 76 and 79 series, people will instead go with the devil they know than the one you don't.

From my side, well I have sown my wild oats, done Baboon's Pass and I will pass quietly into that great night. So I will be staying with my Suzuki Grand Vitara, but damn if it had not been because of circumstances, basically ending in a wheelchair for two years, I should have never traded that Jimny for the GV.

As one of the Land Cruiser Club members said when I announced my choice of 4x4 for retirement: If you can pack enough food and camping goodies in a backpack for a one-week hike, how much more can you get into a Jimny? Sadly, it was kind of full once the wheelchair was loaded in and there was only space for two litres of milk, and a loaf of bread afterwards.

Last word: the Grenadier should sell, but never in the quantities of those Land Rovers that had the Solihull badge on the back - those were still Land Rovers!

We live in a world where facts and fiction get blurred
In times of uncertainty you need journalism you can trust. For 14 free days, you can have access to a world of in-depth analyses, investigative journalism, top opinions and a range of features. Journalism strengthens democracy. Invest in the future today. Thereafter you will be billed R75 per month. You can cancel anytime and if you cancel within 14 days you won't be billed.
Subscribe to News24
Related Links
How the Ineos Grenadier differs from the mighty new Defender
Bound for SA! Ineos reveals its Grenadier - an 'uncompromising 4x4' where form follows function
Buffalo City to the Mother City - trekking the Land Rover Defender's South African history
Next on Wheels24
OPINION | The many benefits of driving an electric vehicle in SA