From Corona, a Hilux, to a Corolla Cross: Why purchasing a Hybrid requires a mind-set shift Toyota South Africa launched their locally-built Corolla Cross earlier in November. The line-up also includes SA's first homegrown Hybrid model. Several Wheels24 readers have since shared their stories and images of their new cars and why they chose it as their new one. Now, Wheels24 reader Trevor Hinrichsen explains that buying a Hybrid also needs a mindset shift...

I have had a 38-year relationship with Toyota. My first car was a tired 1976 Corona, followed by a brand new Liftback in 1984, a Conquest, three Corolla's, a Run X, and a Hilux Legend 45 bakkie, which we still own. In between, I have had the privilege of owning a VW Golf CSX, an Isuzu KB 72 bakkie, a Hyundai i20, and a Ford Fiesta diesel model.

READ | Why I bought a Toyota Corolla Cross: These Wheels24 readers show off their new cars 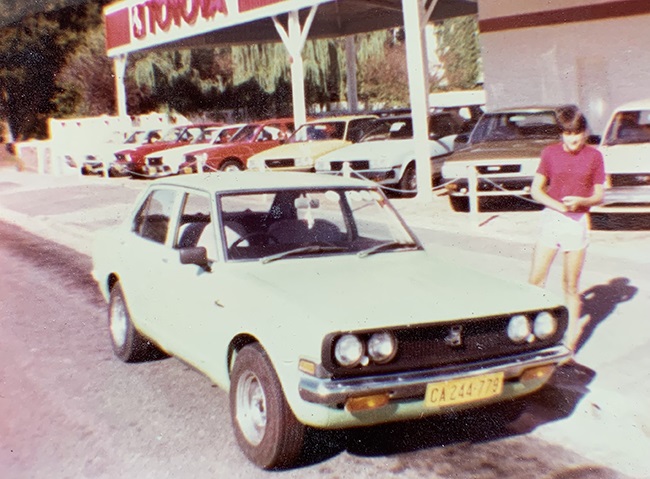 Having come full circle, being 57-years-old and not assured of working past the age of 60,  it was time to buy a car that would last for the next 15 - 20 years. Hence, the Corolla Cross Hybrid seemed like the perfect choice for me.

But deciding to purchase a Hybrid vehicle in South Africa has made me come to a realisation. Colleagues have asked me how far the car will travel once the petrol tank is empty and when I reply, "about 1 kilometre", they are shocked.

I then have to explain that the Hybrid Cross - and any other Hybrid for that matter- is not an electric vehicle (EV) which travels 300, 400, or 500km before needing to be re-charged but that a Hybrid is a petrol-electric marriage which produces phenomenal mileage per kilometre as the petrol engine complements the electric motor to produce energy to move the vehicle. Purchasing a Hybrid requires a change of mindset, and it soon becomes a personal challenge to see how economically (or rather, wisely) one can drive to ensure maximum bang for your buck. The other fact is that you need not drive at a snail's pace to achieve good mileage either.

I filled up on the weekend and achieved 20.7km/litre on the first tank of fuel. This was done by driving normally and consisted of a mix of town driving and a return trip from the deep South to Worcester.

There is absolutely no lag, and I took great pleasure in quickly pulling away from traffic lights - thanks to the immediate torque - thereby 'dropping' a few smart cars on pull away. This resulted in quite a few puzzled looks from fellow drivers who probably underestimated the quick response that the Cross delivers. Overtaking is also not a problem as flooring your foot results in a pleasing increase of power with apparent engine assistance, making overtaking a breeze.

My previous car was a Suzuki Vitara GLX Auto which also has a CVT drivetrain, so I was no stranger to the technology. The gearbox does tend to be a little noisy up a hill, such as the one in Edinburgh Drive in Claremont. However, you can eliminate this by exercising throttle control. A slight decrease of pedal pressure on the accelerator causes the gearbox to change gears with the resultant immediate quietening of the engine.

An electronic gauge on the dashboard (left of the speedometer and where the rev-counter would normally be) indicates charge, economy, and power in a half-moon format. The object of the exercise is to keep the needle in the middle "green" economy zone  - this is where the engine/motor combination is functioning optimally, thereby saving on your fuel costs. It comes with an eight-year warranty on the battery and a three-year or 100 000km warranty on all the rest. I increased the warranty to six years or unlimited mileage for a very reasonable R3 750. This was probably overkilling on my part, knowing Toyota's fantastic reliability.

Toyota has been at the forefront of Hybrid technology for over 20 years (Prius) and has taken the bold step to broaden its market appeal and accessibility.

The introduction of more electric vehicles (EV's) in South Africa is a non-starter unless Eskom can guarantee electricity supply. Imagine what a power surge could do to an EV on charge! I have been told that the secret to Toyota's longevity is that they never design their engines to exceed 70% of their potential output - something which is probably true. The 1.8 naturally aspirated engine in the Cross Hybrid has been de-tuned to deliver 72kW. However, combined with the electric motor, you get a combined power output of 90kW. The designers clearly know what they are doing.

As a rule, Toyota doesn't build flashy, bling-filled cars, although the Cross and their other latest offerings provide more than adequate levels of luxury.

The real bang for your buck comes in their products inherent reliability and resultant excellent resale value and having people like Rupert Mansfield, from Barloworld Toyota, Kuilsriver, in their dealer network. His service was excellent and made the purchase process effortless. 2022 Toyota Corolla Cross Hybrid Xr
Motorpress
Disclaimer: Wheels24 encourages freedom of speech and the expression of diverse views. The views of contributors/columnists published on Wheels24 are therefore their own and do not necessarily represent the views of News24 or Wheels24.
We live in a world where facts and fiction get blurred
In times of uncertainty you need journalism you can trust. For only R75 per month, you have access to a world of in-depth analyses, investigative journalism, top opinions and a range of features. Journalism strengthens democracy. Invest in the future today.
Subscribe to News24
Next on Wheels24
Why I bought a Toyota Corolla Cross: These Wheels24 readers show off their new cars