OPINION | 'Buy booze' at a convenience store, but how will that impact drunk driving? 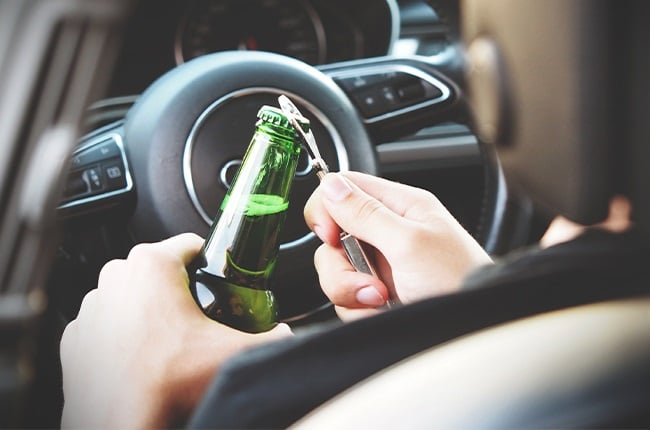 Driving under the influence of alcohol is illegal.

South Africa's challenge with alcohol has been starkly highlighted against the backdrop of the country's Covid-19 pandemic response, which included a complete prohibition on the sale of liquor four times for a collective period of 160 days.

Now that South Africa has returned to the lowest alert level, restrictions on alcohol sales have been lifted, and it's back to business for the liquor industry.

Several petrol stations in South Africa have obtained a license to sell wine, and there is concern that this extended availability will exacerbate South Africa's drinking problem. However, I must point out that the availability of alcohol for purchase is not in itself problematic. The problem comes in when South Africans purchase and consume alcohol and then get behind the wheel to drive.

To prevent this dangerous drinking and driving situation, it is necessary to deter motorists from taking the wheel under the influence of alcohol, which means that law enforcement measures must be visible and unavoidable. A law prohibiting South Africans from driving after just one drink will came into effect in 2021.
Supplied Safely Home by Western Cape Government

Convenience is not the problem

As alcohol availability becomes more convenient and extensive, enforcement of road rules needs to become stricter to ensure South African roads remain as safe as possible by deterring poor driving behaviour. If more petrol stations were to apply for liquor licenses, it would be necessary to consider several factors relating to road safety before liquor authorities can grant the license.

Where the location of the garage convenience store is within a suburb, this is analogous to a neighbourhood liquor store and poses no heightened danger to road safety, unlike allowing alcohol sales at convenience stores on long haul routes which could pose a risk for motorists. Lack of enforcement is the challenge

While it's tempting to think that the problem will get worse because of alcohol being easily accessible on the road, this does nothing to address the issue. Instead, we should be looking at South Africa's drinking and driving problem as a whole.

This means that regardless of where alcohol is being sold, the police have a responsibility to ensure that drunk driving is not permitted. When granting additional liquor licenses, the government needs to increase the rate of roadblocks by monitoring drivers to mitigate the risks they're creating by allowing more outlets to sell alcohol.

Regulations around licenses for petrol stations should stipulate that a license to sell liquor is subject to a responsibility to help law enforcement to tackle drunk driving. Here, garages could be compelled to donate. For example, they could be mandated to sponsor a proportionate number of breathalyser kits to their nearest police precinct to show that they're not just there to turn a profit but rather show that they are just as concerned with support for anti-drunk-driving initiatives. A law prohibiting South Africans from driving after just one drink will came into effect in 2021.
Facebook Safely Home by Western Cape Government

Regular roadside testing or roadblocks will need to be increased, which will require more police officers to be trained in breathalyser testing. This, in turn, will require more budget to be allocated to law enforcement for training and testing equipment to perform breathalyser tests on drivers at roadblocks more frequently and regularly to decrease drinking and driving.

Penalties for drunk driving range from a fine of up to R120 000 or a maximum of six years in prison. Enforcement through roadside testing for alcohol must go hand-in-hand with arrest and stringent prosecution for exceeding the legal alcohol limit to have a proper deterrent effect on drinking and driving.

We live in a world where facts and fiction get blurred
In times of uncertainty you need journalism you can trust. For only R75 per month, you have access to a world of in-depth analyses, investigative journalism, top opinions and a range of features. Journalism strengthens democracy. Invest in the future today.
Subscribe to News24
Next on Wheels24
OPINION | What did JMPD achieve with its traffic jam roadblock in Gauteng yesterday?