I have personally owned and driven a badge-engineered Toyota 1.5 SX manual for almost 15 years, with more than 170 000km on the clock. It's a Daihatsu Xenia, but we South Africans know, love, or loathe it as a Toyota Avanza.

Badge engineering is nothing new. South Africans should be used to it with Ford and Mazda, and Chevrolet models from different parts of the globe. More recently, we've seen it with Nissan, Renault, and Mercedes-Benz with the X-Class bakkie. Even BMW and Toyota have joined forces to bring about the latest Supra.

Perhaps it is a bit of an adjustment when beloved brands do it? When Suzuki and Toyota came together, and the Starlet was born out of the Suzuki Baleno due to the partnership, I didn't mind at all. I happily drove a company pearl white Starlet 1.4 XS Auto for many weeks and a few thousand kilometres following the sale of my annual allocated company car - a silver VW T-Cross 1.0 TSI Highline R-Line DSG Auto. I think the Starlet transition was to wean myself off the turbo triple (my last six company cars were variations on the triple theme) and get used to a normally-aspirated four-cylinder for what was to follow the Starlet. I even took the Starlet on a long weekend up the West Coast! It was a trip, or test instead,  to see if the car could do what I thought it could do, and it did!  It coped admirably and comfortably with everything we threw its way—high-speed tar roads, secondary tar roads, gravel road trundling, middle-mannetjie gravel road trundling. Fully loaded, less loaded; platteland dorp-crawling to seaside dorp-crawling. It sits on the road no matter the surface.  And, it can take people; it can take luggage. I remain very impressed with the Suzuki Baleno with a Toyota badge!

Then things got even more interesting, and in keeping with the SUV craze in South Africa, along came the Suzuki Vitara Brezza, and the Toyota Urban Cruiser was born a month later too. Think of it like what the T-Cross is to the Polo, so the Urban Cruiser is to the Starlet. And, as alluded earlier, that is where the Starlet was waved goodbye fondly. It was swapped for the newly-arrived annual allocated company car last week - a brand new temporary number-plated Toyota Urban Cruiser 1.5 XS Auto with a handful of kilometres on the odometer. With those typical compact SUV boxes ticked, the Pearl White 1.4 XS Auto Urban Cruiser looks the part. I think it looks even better from the front than the half shared front face (bonnet and lights) of the Vitara Brezza. It has a high 198mm ride height, black plastic cladding all around, chunky bumpers and roof rails - it's Toyota SUV-ness concentrated in a four-metre-long package.

The only divisive styling feature on the XS is the factory-painted black alloys. I like it, though, and it suits the opaque look with the overall white/black look of the Urban Cruiser perfectly. If the idea of white and black is too foreign, think of it as a Star Wars Storm Trooper theme, and you get the idea, especially when looking at it full on in front. From the get-go, I said if the Urban Cruiser does everything as well as a Starlet can (especially after that afore-mentioned West Coast trip), and it has more pep under the bonnet (11kW and 8Nm more). All-round more softness in noise and ride, Toyota would have another winner here. And so it does. 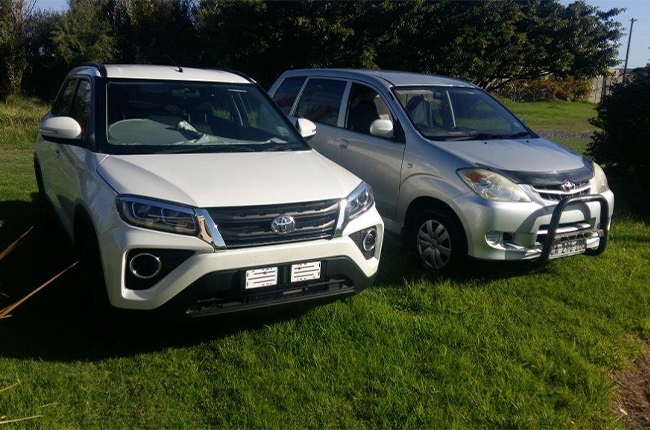 I have driven it for two weeks now, and it does the typical daily commute well. It went to Brackenfell along the N2, R300, and N1 easily and quietly. The 'Cruisertjie' was used to fetch a Toyota Land Cruiser 79 Namib Edition and received praise from the big boss who was very impressed with it.

Like the Starlet, the engine noise subsides, and whether you do 120km/hor 130km/h or a bit faster, the engine sounds the same. Put it like this: you hear more roof rail wind noise and Apollo tyre noise than 1.5-litre four-cylinder engine noise. When driving 120km/h, the engine revs are around 3000rpm with the four-speed auto. When you drive the same speed as with the five-speed manual model, it's on its way to almost 4000rpm. It affects the manual's overall fuel consumption figure, too, with some publications quoting higher or equal fuel consumption figures for the manual vs auto. At the moment, the automatic shows more than 7.4 litres/100km or 13.5km per litre average (it's still on its first full tank and has the grand total of 300kms on the odometer. Features over and above the Starlet I really like is the raised ride height, the LED headlights (especially) and taillights, the touch screen radio and the climate control. The keyless entry and exit and push-button start was a gimmick at first, but now I am used to it.

Negatives? The Starlet's boot hatch door has a very satisfying thunk when closing it that the Urban Cruiser is missing. The front and back seats differ from Starlet to Urban Cruiser with their cushion density and size. However, the Starlet might seem more comfortable at first try than the Urban Cruiser.

I have no complaints about the dash, doors, seats, or floor materials, nor have I had any rattles anywhere.  It might be early days, but Maruti Suzuki in India does a fine job assembling these cars, that's for sure. I am not a badge snob, so for me, the Baleno and the Vitara Brezza are excellent cars in their own right. They make fine Toyotas too, like the Starlet and Urban Cruiser. Just as happily as I drove the Starlet, I would go a Baleno too. The same applies to Urban Cruiser vs the Vitara Brezza.

I'm looking forward to the next Toyzuki partnership model reveal.

We live in a world where facts and fiction get blurred
In times of uncertainty you need journalism you can trust. For only R75 per month, you have access to a world of in-depth analyses, investigative journalism, top opinions and a range of features. Journalism strengthens democracy. Invest in the future today.
Subscribe to News24
Next on Wheels24
End of the best bakkie ever: 'I haven't had a single problem with my Nissan NP300' - reader