Reader's Ride | A Ford or a Chev? This Courier bakkie is modified with a roaring turbo V8 • Wheels24 reader Aldrin Carolissen is in the process of fitting a turbo V8 engine into his Ford Courier bakkie.

• The bakkie has also undergone a full respray from the original Blue to Yellow.

The exorbitant prices of brand-new performance cars, and bakkies, have made it largely inaccessible to the vast majority of local petrolheads. For this reason, some resort to building their own creations from scratch.

Engine swaps continue to be one of the quickest ways in which to attain more power. Everything from an RB26 engine squeezed in an Opel Kadett chassis, to a Volkswagen Golf MK1 housing an entire sixth-generation powertrain are some of the notable ones locally. Besides biltong and potjiekos, South Africans have a special place in their heart for bakkies and a penchant for ones that go fast. With that being said, Wheels24 reader Aldrin Carolissen, from Paarl, is one such fan and has something special brewing in his workshop, Winelands Auto Clinic.

Far from your ordinary

He is the owner of a third-generation Ford Courier bakkie, and while it may seem relatively unassuming on the eye, it holds a special and very loud ingredient under the bonnet.

Do you have a special build-in progress or completed - you'd like to have featured on Wheels24? Please Email us here, or share your comments in the section below.

The stock powerplant was removed, and in went a Chevrolet V8 that Aldrin says made 300kW in naturally aspirated form. The buck didn't stop there. The build is made sweeter because the once carburettor-fed unit has been converted to electronic fuel injection and is also fitted with a turbocharger that runs off of a Spitronics engine management system. At the moment, the gearbox in the bakkie is a Richmond five-speed with a Hurst shifter that Aldrin says costs around R120 000. It will soon be removed, and in its place will go a Super T10 four-speed - an application most commonly used in Nascar racing. As far as current performance figures go, Aldrin has yet to have the bakkie put on the dyno to see what it pushes out with the forced induced setup.

The bakkie was in a sorry state before the rebuild, with parts like the bonnet and wheels removed, as well as having a smashed windscreen. Its original colour was blue, but the entire chassis was given a new lease on life, stripped and resprayed yellow. Though it won't sit well with ardent Ford fans, the bakkie has a Chevrolet badge on the tailgate.

The entire black bonnet with a circular cut out for the burly air filter is the only nondescript indication that the bakkie is something more than a sleeper. If that is not enough, the sound of the thunderous V8 is a definitive answer on its own.

Click on the arrows to the left or right to view more images: 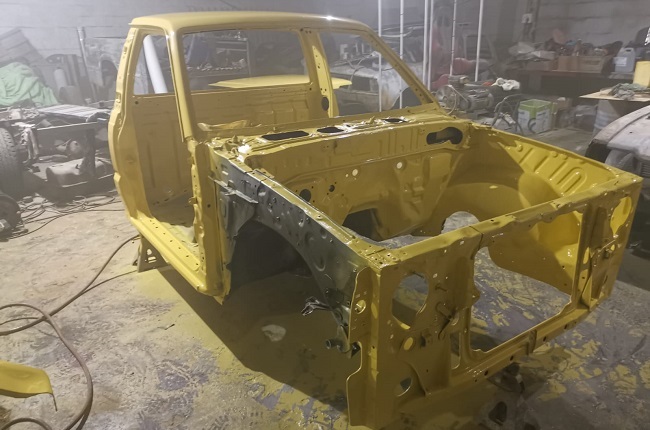 Just in case you had any thoughts of wanting to purchase the bakkie, Aldrin says he will never let go of it. One can understand why - it is a one-of-a-kind build that is close to the owner's heart and has the potential to embarrass many a modern performance car.

This turbo V8 bakkie is just one of many unique creations roaming the country. Many have gone with fitting a 2JZ in a Hilux bakkie, but Aldrin's one changes the narrative with American muscle, and because there are so few of these conversions done.

Aldrin says that he has more builds he is currently busy with, so more exciting projects will come from his workshop in the not too distant future. We live in a world where facts and fiction get blurred
In times of uncertainty you need journalism you can trust. For 14 free days, you can have access to a world of in-depth analyses, investigative journalism, top opinions and a range of features. Journalism strengthens democracy. Invest in the future today. Thereafter you will be billed R75 per month. You can cancel anytime and if you cancel within 14 days you won't be billed.
Subscribe to News24
Next on Wheels24
This is the best Porsche ever driven: 1992 964 C2 - reader