CLARENS, Free State - Kia is once again on the model offensive, after debuting its new Sorento in South Africa in June, the Korean automaker has entered the premium people-mover market with the launch of its new Grand Sedona.

The new MPV is a huge improvement over the previous model and that's no accident as it's the final vehicle in Kia’s line-up to be penned by Peter Schreyer.

The design moves away from the timid look of the previous generation to a big, brash people-mover especially with it's new grille, borrowed from the Sorento. It's an MPV but Kia insists it has sedan touches such as its features and drive quality.

The Korean automaker is targeting large families and the hospitality industry for those in need of a VIP shuttle. The combination of third-row seating, multiple trim levels and a choice of four or six-cylinder engines makes it a unique offering in its segment.

David Sief, Kia South Africa Marketing Director said: “We are very excited about the all-new Grand Sedona, not only because it is the final model in the Kia line-up to receive the Peter Schreyer design treatment, but also because it enters the South African market as a true family vehicle.

"With it’s unique combination of cutting edge design, high specification levels throughout the model line-up and competitive pricing, it has no competition when it comes to quality, space and luxury."

On the safety front it's equipped with eight airbags (driver, passenger, side and curtain), anti-lock braking system, electronic stability control and several 'active' safety technologies including blind-spot detection with lane-change assist and rear cross-traffic alert (which warns of other cars driving behind when reversing).

Both engine options are mated to a six-speed auto driving power to the front wheels. The new MPV has an eco drive mode which adjusts power to maximise fuel efficiency.

The 2.2 litre turbodiesel, borrowed from the Sorento, is still a solid performer though it's not the revviest diesel around, for a large SUV however it's perfect. It's not the most athletic engine so if you're planing on overtaking plan ahead, and give yourself plenty of space.

The V6 petrol engine is smooth, powerful and incredibly revvy. It has less torque than the diesel but is far more eager to accelerate due to to its higher power output.

The new MPV is equipped with smart power tailgate; automatically opens when the key is in close proximity to the rear, allowing owners to load shopping bags or heavy objects straight into the vehicle. It also has power-sliding rear doors that can be activated by door releases, buttons on the driver’s overhead console or the Smart Key.

High specification units use eight Infinity speakers throughout and an external amplifier.
Depending on the trim level, the MPV can be fitted with a heated steering wheel, a cooled glove compartment, an auto demister, cruise control, park assist, telescopic steering wheel, dual sunroof and an auto-dimming rear-view mirror.

Each passenger row can independently set its own aircon while built-in sunshades for second and third row seating improve passenger comfort.

The Grand Sedona has a convex conversation mirror (allows drivers to see, positioned below the overhead console, allows the driver and front passenger to see what’s happening behind them, while giving the car a more social atmosphere at the same time

BUT HOW PRACTICAL IS IT?

In seven-seat variants, the cargo area grows by 77 litres to 960 liters behind the third row of seats. This expands to 2220 litres behind the second row and 4022 litres with the rear seats folded.

Kia said: "Grand Sedona models equipped with fabric seating is upholstered in anti-pollution upholstery, allowing for liquid spills to be easily wiped away if noticed immediately. This unique upholster also releases stains more easily than traditional seating fabric when scrubbed gently with soap and water – ideal for spillages that many Grand Sedona owners may expect from younger passengers."

There are numerous storage spaces throughout the cabin including a large centre console storage, slide-open tray in the second row, and seat-back pockets. Depending on the number of seats fitted, there are, Kia says, "eight to 12 cupholders and four bottle holders positioned throughout the cabin."

WHAT’S NOT TO LIKE?
•  With the rear bench occupied the boot doesn't offer much stowage space.
•  Despite the huge centre console, the reversing camera is tiny.
•  No satnav at launch but Kia assures it will be released as an upgrade for SA later in 2015.

With room for seven (or 11), the Sodona is a capable MPV loaded with features, offering an impressive list of equipment. The Grand Sodona has been completely redesigned and re-engineered.

If a Sportage is too small for your needs but you're not in the hunt for a large SUV, the Grand Sorento may satisfy your tastes for something in between. It's not cheap but it's moved Kia into premium territory in terms of looks, comfort and its host of tech and convenience features.

Kia will unveil its new Optima and Sportage at the 2015 Frankfurt auto show in September. 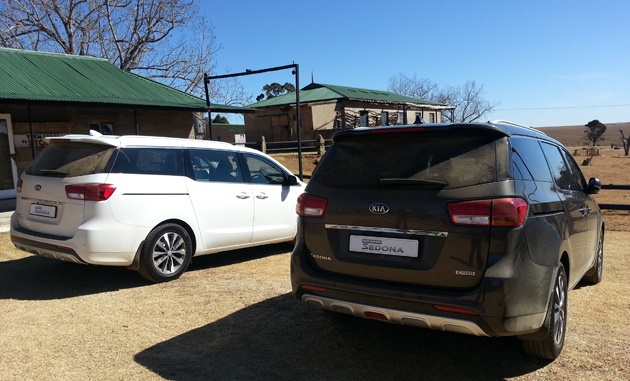 UNDER FREE STATE SKIES: The Kia Grand Sedona has arrived in SA, with prices starting from a smidgen under R500 000 for the 2.2 CRDi EX 7-Seat. Image: Wheels24/Sergio Davids

We live in a world where facts and fiction get blurred
In times of uncertainty you need journalism you can trust. For 14 free days, you can have access to a world of in-depth analyses, investigative journalism, top opinions and a range of features. Journalism strengthens democracy. Invest in the future today. Thereafter you will be billed R75 per month. You can cancel anytime and if you cancel within 14 days you won't be billed.
Subscribe to News24
Related Links
2015 Kia Grand Sedona
Next on Wheels24
New GLC for SA: Merc’s ‘most important’ SUV?