10 things I learned from buying a new car

Anja van der Spuy
Share
For the past month I’ve been looking at buying a second-hand car. I don’t want a brand new car, because I take the train and at this stage I don’t really drive my car all that often.

So why do I want to buy a new car? Because even though I love my Tazz, it doesn’t have aircon or power steering. I live in Paarl – summer without an aircon is like a one way ticket to hell.

My dad bought the Tazz in 2000 for my mom. It was then passed on to my brother, and after he drove it for 4 years, it was given to me.

During my brother’s term the car’s windscreen was smashed by an angry bergie, vomited on by a friend and driven into a small tree (by me).

That car is a total badass – I like to imagine that if it were alive, it would be a mixture of Steve O, Ozzy Osbourne and Charlie Sheen. 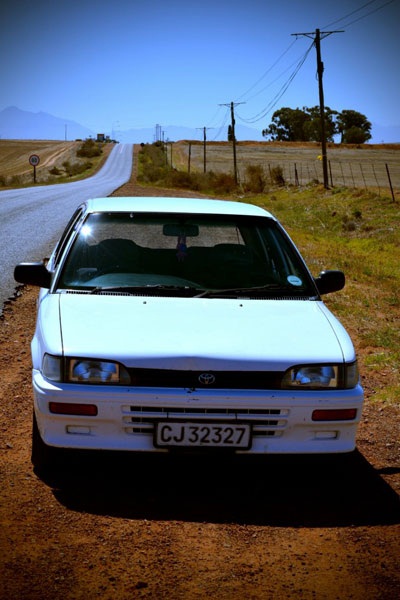 About a month ago I took a secondhand 2012 Hyundai i10 for a test drive. Upon first glance the car looked spotless, scratchless and stylish.

But then when I got into the car and stepped on the clutch, I could feel that something was wrong. I told the car salesman that it felt a bit rigid (after struggling to find the English word for “stram”), to which he gave a very clipped answer: “Well, I don’t feel it.”

Oh, I’m sorry. I didn’t realise this was about YOU. Will you be giving me R85 000 to buy this car? No?
THEN GET SOMEONE TO LOOK AT THE CLUTCH.

He then told me that the car is under warranty, so if the clutch breaks I could have it fixed.

Tempting offer, Mr Secondhand Car Salesman. But no, YOU should have it fixed FOR me before I buy it. Which is exactly what I told him in my email after the test drive.

A few hours later he emailed me back to let me know that he had one of the mechanics look at the clutch, and that it seemed fine to him. He added that he’d take it to Hyundai to have it checked out, but that it could take up to 2 weeks for them to service.

Read: I’m not in the mood for this. You’re being full of shit. Just buy the car and have it fixed by Hyundai yourself.
To add insult to injury, my heart nearly stopped when they sent me the interest rate.

Thanks, but no thanks.

On that moment I vowed to never let the land sharks harm other people in my position, and to do that I’d write a guide.

So here it is.

They don’t live under your bed, nor your closet. They live in Gumtree ads and in banks.

2. Google is your best friend

Yes, it is very important to test drive a car, but it is equally important to research the shit out of it beforehand. Watch YouTube reviews (I’m a big fan of Car Buyer), Google the safety rating, pros, cons and availability of car parts in South Africa.

Most importantly: Is there a service centre in your area? Ain’t nobody got time to drive far for a service!

3. Speak to other people

I am a firm believer in the fact that other people are the only advertising you can trust. Speak to other people; ask them how they bought their car, how they got a loan or what their opinion is about the car you’re eyeing.

I spoke to so many people – at work, on the train, on Twitter and even in my family. Everyone gave me very solid advice.

At the end of the day experience talks louder than advertising.

4. Get a dolphin on your side

Sharks won’t leave you alone unless you have a very wise dolphin on your side. Banks will slap you with a massive interest rate if you apply for it on your own – get a dealership to assist you.

5. If it seems too good to be true, it probably is

Don’t EVER get your hopes up. I know that it may seem defeatist, but you must never get too excited about a deal that looks too good to be true.

I saw an Audi A4 (with leather seats, electric doors, satnav, etc) on Gumtree for R39 000. That is dodgy – there is no way that’s a squeaky clean deal. About half an hour later the ad was removed. Perhaps it was sold, or perhaps it was a stolen car. Or it was a scorned women who sold her lovers’ car for dirt cheap to get back at him.

The point is: never trust anyone, and don’t get too excited about anything until you’ve actually sealed the deal.

I’m no feminist, but the truth is that the car buying industry is notoriously sexist. You’re a woman, so you don’t know anything about cars.

Stand your man, don’t let anyone walk over you and make sure you show them who is boss. It is YOUR money, after all.

I know my expenses, but I don’t know them to the cent. I have this really bad habit of rounding my expenses off, so it took me a while to actually make a proper list of my debit orders.

It’s important that you know exactly how much money you’re giving out to make extra sure that you’ll have enough left over after you buy the car. I know this may seem like an obvious tip, but I promise you it’s a crucial one.

I bounced between limits way too much, sometimes it was muuuuch higher than I’d thought. Other times I was a total miser. Just make sure how much you are prepared to pay, and stick to it!

9. If you can’t negotiate, find someone who can

I can’t negotiate for shit – I feel too sorry for people. But the truth is that you have to learn how to negotiate, because most of the time, even if you negotiate for R10 000 to be knocked off – they’ll STILL make a profit.

10. The decision rests with you

Other people can advise you and guide you, but at the end of the day it is your name that is going on that document. And you’re the one who has to pay the instalments.

So make sure that the decision rests with you, and that you’re happy with it.
I really hope this guide helps you to defeat the land sharks. May you find a car that brings you much joy and little debt.

I finally found one – a beautiful Renault Modus with only 55 000 kilos on its clock. I now have the powersteering I’ve been pining after, aircon and so many other sexy features – like a sunglasses holder above my seat. It’s the perfect car for me! 
We live in a world where facts and fiction get blurred
In times of uncertainty you need journalism you can trust. For 14 free days, you can have access to a world of in-depth analyses, investigative journalism, top opinions and a range of features. Journalism strengthens democracy. Invest in the future today. Thereafter you will be billed R75 per month. You can cancel anytime and if you cancel within 14 days you won't be billed.
Subscribe to News24
Related Links
What car do you want the most?
A farewell to my first car
Next on Wheels24
How to save petrol in GIFs