Cape Town - It is that time of the year again when the world pulls pranks and manufacturers try to put one over people's eyes. Yes, it's April Fools'!

We scanned the Internet for some pranks and listed (and scored) five that we think are pretty awesome.

We hope you enjoy it as much as we did compiling it!

With a front-facing 9MP camera in the rear view mirror and a reverse camera in the rear bumper, drivers can now capture HD photos and videos and preview it on the vehicle’s infotainment system before sharing it. Voice recognition eliminates the need to type captions.

Driving with both hands firmly planted to the steering wheel is important, but this new feature from Subaru allows you to do perhaps the most important thing of all: staying connected! All this while keeping your eyes on the road.

The future is here!

Available from April 1st, the system will be standard on all vehicles sold in SA, as part of the Subaru April Fools Imaginative campaign. A new and very important job opportunity just opened up at Ford, but unfortunately all positions have been filled. The position of “engine listener” requires the employee to be in a soundproof room and listening to a range of engines for any imperfections.

The candidates apparently went through a very stringent selection process, whereby all of their senses were tested under rigorous conditions. These tests included wine tasting, tuning pianos for concerts, looking at a magnifying glass through a magnifying glass, and even touching a range of surfaces and materials while being blind-folded with a lollipop in their mouths. Rigorous!

The most important engine the successful candidates will have to listen to is that of the Ford Focus RS. They have to listen to the engine with a stethoscope for any impurities deep inside the engine. Up to 2000 tests can be carried out on a single day.

Juan Carlos Rosmari, quality technician at the Valencia engine plant, said: “The experience of hearing thousands of engines allows us to sense straight away when something is not working perfectly.

“Each different engine type has its own unique sound, and from listening to them in the test cells we get to know their individual characters – and the tell-tale signs which indicate a problem.”

The candidates' contracts expires at the end of the business day on April 1st, 2016.

Honda is doing its utmost best to shake off its reputation of being an old man’s car and have in recent years have come up with products that are doing just that. The latest being the Civic Type R. But now the Japanese firm have taken it one step further and are now introducing emoji number plates on their vehicles.

This is the first step in making their vehicles more individualistic – something that is appealing to the younger buyer they are targeting. This new trend will be launched in early 2017 and the first market to receive it will be the UK. Honda already held talks with the country’s Driver and Vehicle Licensing Agency.

It is not just for fun and games that Honda are doing it. They’ve conducted research into the matter at hand and found that 96% of the respondents aged under thirty preferred emoji number plates over conventional plates.

97% of the above-mentioned 96% indicated that emojis are their main method of expressing an emotion, feeling or idea.

Honda approved the new project at 00:00 on April 1, 2016, and is hoping that this new plan will make them cool with their target audience. 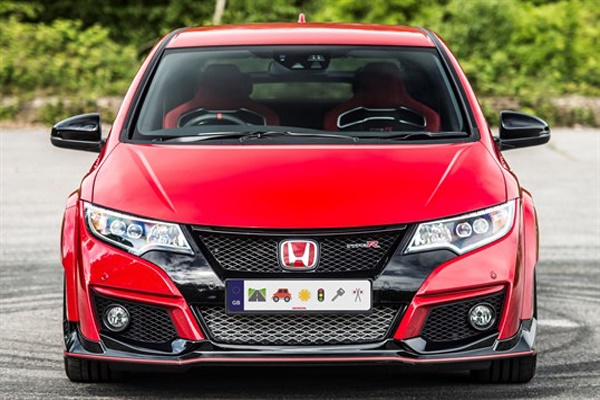 Ever traveled somewhere and suddenly the kids start acting like, well, kids? Ford understands your situation, your predicament, your pain and suffering. But importantly, Ford understands the importance of quieting the kids down before they reach that dreaded level: anarchy.

The technology used is similar to what can be found in the automaker’s Active Noise Control system, which reduces/eliminates unwanted sound waves from the audio system.

CALM is aimed at reducing high-pitched noises that small children emit, but Ford is also hard at work in developing a system for lower frequencies called “mother-in-law”.

CALM is available on all new and second-hand Fords from April 1.

In what is a bold and daring move for the British-German marque, MINI now offers the option of scissor doors to all their models, with the added safety feature of ‘Pyrotechnic Emergency Exit’, or PEE, if you will.

These doors were originally only scheduled for the three-door, Paceman, and Convertible MINI’s, but it will now be available on the Countryman, too, from next year onwards.

The scissor doors open vertically and should, in all likelihood, ease exiting/entering the car in tight spaces. The doors can be opened via a remote control, a button on the door handle, or the MINI Excitement app.

In the unfortunate case of an accident, the doors will be blasted off its hinges, ensuring that you are saved in a nick of time. We live in a world where facts and fiction get blurred
In times of uncertainty you need journalism you can trust. For only R75 per month, you have access to a world of in-depth analyses, investigative journalism, top opinions and a range of features. Journalism strengthens democracy. Invest in the future today.
Subscribe to News24
Related Links
New Civic Type R in SA: We drive Honda’s hottest hatch
Next on Wheels24
Volvo's low-key C30 hot hatch could once subdue VW's Golf GTI