• Ghaleeb Theys is regarded as a walking encyclopedia of the BMW 535i (E12).

• Theys has been living on the Cape Flats all his life and has garnered the widespread respect.

• Shudley Daniels gives an ode to the 'oom' that contributed to his love of cars.

Legend goes that when Jan van Riebeeck came to the Cape in 1652, he was accompanied by his wife Maria, and Ghaleeb Theys.

Ask any Cape Town car guy, and they will tell you they know the story, or heard of the legend that is Oom Theys. Not only is he entrenched in the Cape car culture, but is the man behind Theys Tyres, and a walking and living encyclopedia of the BMW E12. I pride myself on my car knowledge, but I will gladly concede that when it comes to the BMW E12, the Oom taught me a thing or three, and then some.

Despite his brash, hardcore and foul-mouthed demeanour, the man can rattle off specs, stories, and identify every owner of every E12 ever produced. He commands respect, and deservedly so. Having had a number of these cars over his long years on the Cape Flats, he is well-respected and admired for his love of the marque. 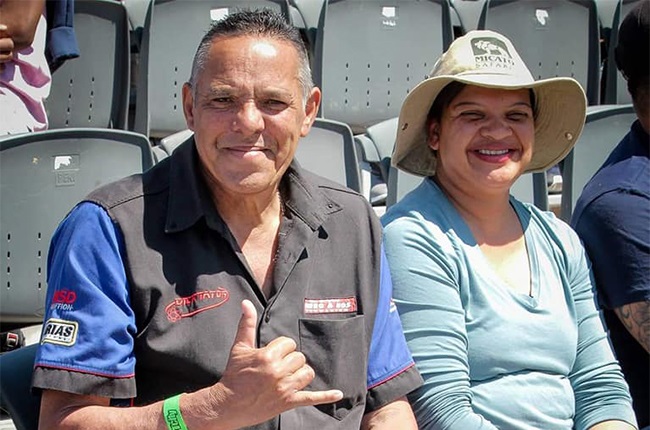 These days, even the younger generation (and I've heard this with my own ears when the millennial driver of an M2 told someone "You must see that Uncle's car, yoh!") can't help but show appreciation for his latest E12, a 1984 535i. Incidentally, only four of these cars were produced in South Africa in that year, which indicates how special it is. With its dogleg close-ratio gearbox, limited-slip differential and 214 cubic inch straight-six engine, it has more go than one would imagine, but Oom Theys doesn't abuse his baby.

Being an increasingly rare collectable, you'd think the car would be parked off like the few others in the country, but as the Oom says: "Why must I fucken park the car? I bought the car to enjoy it so I will fucken drive it. People who park cars are mad!"

The light metallic blue E12 was purchased about three years ago from a reputable seller, but the car needed some TLC. And if there is one person in the world that would offer unconditional TLC to an E12, it would be Ghaleeb Theys. The bodywork was in good nick, but it received some touch-ups to get it close to perfect. Not bad for original paint on a car which is pushing close on 40 years. The sports suspension was lowered ever so slightly to improve the stance, and the 225x40x17 rubber in the front now fills the arches much better. The 255s at the rear hint that it was always meant to be a performance car.

Do you know of someone who made an impact on your local motoring scene? Email us your story or use the comment section below. Rolling stock is a bit of a contentious issue. The wheels were upgraded to a period-correct set of five-spoke Racing Dynamics that works a charm, but Ghaleeb has his heart on Borbet Bs and is searching the world over a decent set. I think concave Momo Arrows would look kwaai on the car! The original wheels are a great option, but with its odd and rare tyre size, it is rather impractical for a daily driver.

The plush dark blue Recaros might not be leather, but they're sporty yet comfortable enough to make them desirable to even the most hardcore modern BMW driver. The interior is immaculate but stock, and it even maintains the original head unit. That's not to say the '387-year-old' dinosaur can't listen to his 1950's tunes. He has a Sony head unit retrofitted in the glovebox, linked to an app on his mobile device. Tech-savvy, nogal!

The rest of the in-car entertainment was professionally installed and is as neat as it is functional, which typifies this car. While everyone knows I am a bit of an aficionado of the German luxury brand without the kidneys, I have a huge appreciation for this particular car. It is not just because of the heritage or that it was an icon growing up, but because it gets driven despite all of that. This car is at most motor events in Cape Town and is always spotted out and about. That's what cars are for at the end of the day: To be driven.

We live in a world where facts and fiction get blurred
In times of uncertainty you need journalism you can trust. For only R75 per month, you have access to a world of in-depth analyses, investigative journalism, top opinions and a range of features. Journalism strengthens democracy. Invest in the future today.
Subscribe to News24
Related Links
WATCH | 'I knew it was mine' - An incredible story on acquiring a 1955 D-Type Replica
WATCH | Driving 18 000km from Cape Town to Cairo in a 1998 Toyota Corolla
Sold out! 275 bidders took aim at SA's largest collection of 140 rare classics
Next on Wheels24
'It's become a part of who I am': How a hobby turned into a Hot Wheels collector's passion