Bring your cheque book: High-rollers have a rare chance to own this exclusive Ferrari LaFerrari. The name itself stirs emotion in our soul, and while we haven't had a chance to drive one yet, we can tell you that the Ferrari LaFerrari is one of our top five bucket list cars to experience here at Wheels24. We came across this ultra-rare model that's going on the block at RM Sotheby's next month, which you can bid on through the company's website if you're itching to invest some of your wealth on something special. The car is one of 499 officially registered LaFerrari cars built for the road, and it's painted in a striking hue that is more akin to a suit that The Joker would wear in a Batman comic than a colour that you'd see on a Ferrari. The colour is called Vinaccia, and the car's interior is finished in Pelle Chiodi Di Garofano tapestries. According to RM Sotheby's spokesmen, the vehicle was originally delivered to its European owner by renowned Ferrari dealer Niki Hasler, situated in Basel, Switzerland. The auction firm also notes that this LaFerrari is minimally driven, showing a mere 918 miles (1477km) on its odo. Is the 918 mile read out a nod to Porsche? We're not sure, but it's one heck of a cool number to see on the Ferrari dial of all places and we reckon it might be worth keeping the numbers exactly where they are for the sake of value preservation. Sadly, however, if you want to keep the mileage as is, you won't be able to drive it.

"Two caretakers have meticulously maintained this car through its lifetime. Everything that's been serviced or worked on has been documented, and it comes with a full service history book stamped by authorised Ferrari dealers and is accompanied by fitted luggage, manuals, and a bespoke toolkit," the auctioneer says. As we've mentioned, the LaFerrari should be a genuine bucket list car for any car collector or petrolhead, representing Italy's might amongst the "Holy Trinity"; Ferrari LaFerrari, McLaren P1 and Porsche 918 Spyder. When the LaFerrari launched to the world in 2013, it elevated Ferrari into a new world of electrified hypercars that had not been seen before from Maranello. Ferrari directly lifted the car's 6.3-litre naturally-aspirated V12 petrol engine from the developmental FXX track-only model. 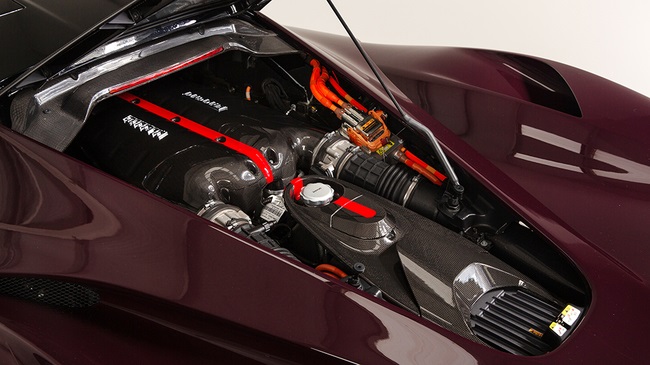 With a relatively high engine compression ratio for that time in a road car of 13.5:1, the raging V12 engine in the LaFerrari punches out 588kW, redlining at an eardrum-shattering 9250rpm. Its 699Nm of torque arrived relatively high, too, just shy of 7000rpm.

An electric motor derived from Ferrari's F1 car KERS technology was installed in the vehicle's rear, adding 120kW of motivational power, most of which is tuned for use at lower petrol engine revolutions to help you get away quickly out of corners. The thrill factor? All this magnificent shunt is sent to the rear wheels only via a custom-built seven-speed dual-clutch transaxle transmission. A stock standard LaFerrari would have set original owners back around R20 million when Ferrari launched the car nearly a decade ago. Of course, none of these cars left the factory as is, with numerous customers opting to personalise their vehicles with unique exteriors and interiors.

It's believed that every single LaFerrari that was built is different to each other. These days, if one trades hands in a private sale, they can fetch upwards of R30 million. RM Sotheby's believes that this purple LaFerrari, however, could sell for around R50 million when the hammer drops on it next month. Check out the RM Sotheby's website if you would like to learn more about this car and register a profile to bid on it. Remember, the car is left-hand drive, so you can't register it for official road use in SA and also, remember to factor in auctioneers fees and shipping if you plan on bringing it to Mzansi.

Would you spend a whopping R50 million on this dream car, if you could? If not this Ferrari, which once-in-a-lifetime vehicle would you break the bank to own and enjoy for the rest of your life? Let us know in the comments section below, or send us an email here.

We live in a world where facts and fiction get blurred
In times of uncertainty you need journalism you can trust. For only R75 per month, you have access to a world of in-depth analyses, investigative journalism, top opinions and a range of features. Journalism strengthens democracy. Invest in the future today.
Subscribe to News24
Next on Wheels24
This Hot Wheels car and IWC watch are expected to fetch a pretty penny on the block