Celebrity climate hypocrites - do celebrities practice what they preach and are they really going green?

The threat of climate change is very real, but it can often be difficult to know how the general public can make a difference

With many big names and celebrities often preaching about how the world needs to step up, it sometimes feels like we're not doing our part. However, are the rich and famous holding up their end of the bargain? Or are these just empty words?

After Leonardo DiCaprio famously used a private jet six times in six weeks, Select Car Leasing decided to investigate – are the celebrities who preach about the environment really doing their best to help save it?

To find out we looked at the fuel efficiency of a Toyota Prius, the environmentally friendly car of choice, over an average yearly usage of 12 874km and compared that against some celebrity personal car collections. 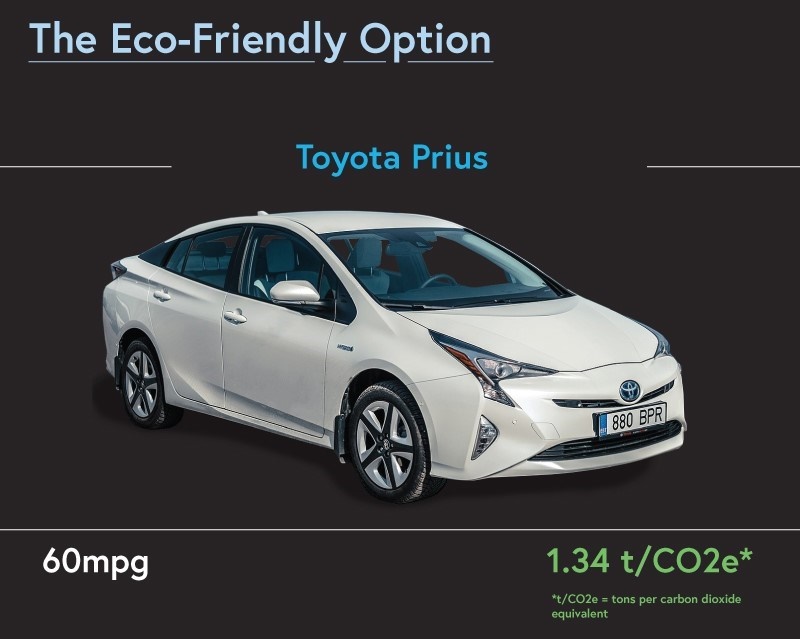 Elon Musk is the first climate hypocrite on our list. It might be surprising that the Tesla and SpaceX founder, who frequently lectures the world on the benefits of reducing carbon emissions, still owns two petrol cars in his Ford Model T and 1967 Jaguar E-Type Roadster.

He also uses his Gulfstream G650ER private jet to travel the world on business engagements, which uses an eye-watering 1 854 litres of fuel every hour. In April 2018, Facebook spent nearly $9m on private jets and security flying Mark Zuckerberg around the US. He plans on visiting all 50 states to find out more about the people who use his social network.

Although he has a relatively modest car collection, his big purchase was the $1.4m Pagani Huayra which only manages 13 mpg on a good day. After telling the world that taking bold action on climate change is the right thing to do for the people of the planet, Richard Branson’s main vehicles for luxury travel are his Dassault Falcon 50 EX private jet and Necker Belle yacht.

He also uses an amphibious Gibbs Aquada to occasionally travel across the channel from England to France with its 15 mpg fuel economy. He also previously owned the larger Dassault Falcon 900. Bill Gates owns a collection of vintage Porsches, with the 18mpg 1988 Porsche 959 Coupe being the vehicle he uses on a daily basis. Along with being a successful filmmaker, James Cameron is also a keen motorcyclist, owning a Ducati 848 EVO and three Harley Davidson’s.

He’s also been known to meet up with Arnold Schwarzenegger, another celebrity on our list to show off their prized bikes. He owns a wide variety of vehicles from the environmentally conscious Tesla Model S to the more fuel hungry Ford GT. After winning awards such as the United Nations Messenger of Peace and the Clinton Global Citizen Award, it’s safe to say that Leonardo DiCaprio is Hollywood’s climate King.

However, he has been involved in several controversies which contradict his strong environmental beliefs such as flying by private jet from Cannes to New York to pick up an environmental award and back again. Pharrell Williams has become increasingly concerned about our environment in recent years.

Recently speaking at a United Nations Foundation event, the rapper told the audience that we must take action on climate change before it’s too late. He’s keeping his collection luxury cars, however, with his Rolls-Royce Phantom and Ferrari Enzo being some of the highlights. A keen aviator, Harrison Ford has a large collection of aircraft. The largest is his Cessna 208B Grand Caravan which consumes a massive 334 gallons of fuel per hour.

He is also a collector of classic cars which have a low mpg rating, however, this is balanced out with his Tesla Model S.

His passion about the climate change was evident when he spoke at the recent Global Climate Action Summit but with his array of gas guzzling vehicles, he can’t fight climate change Solo. 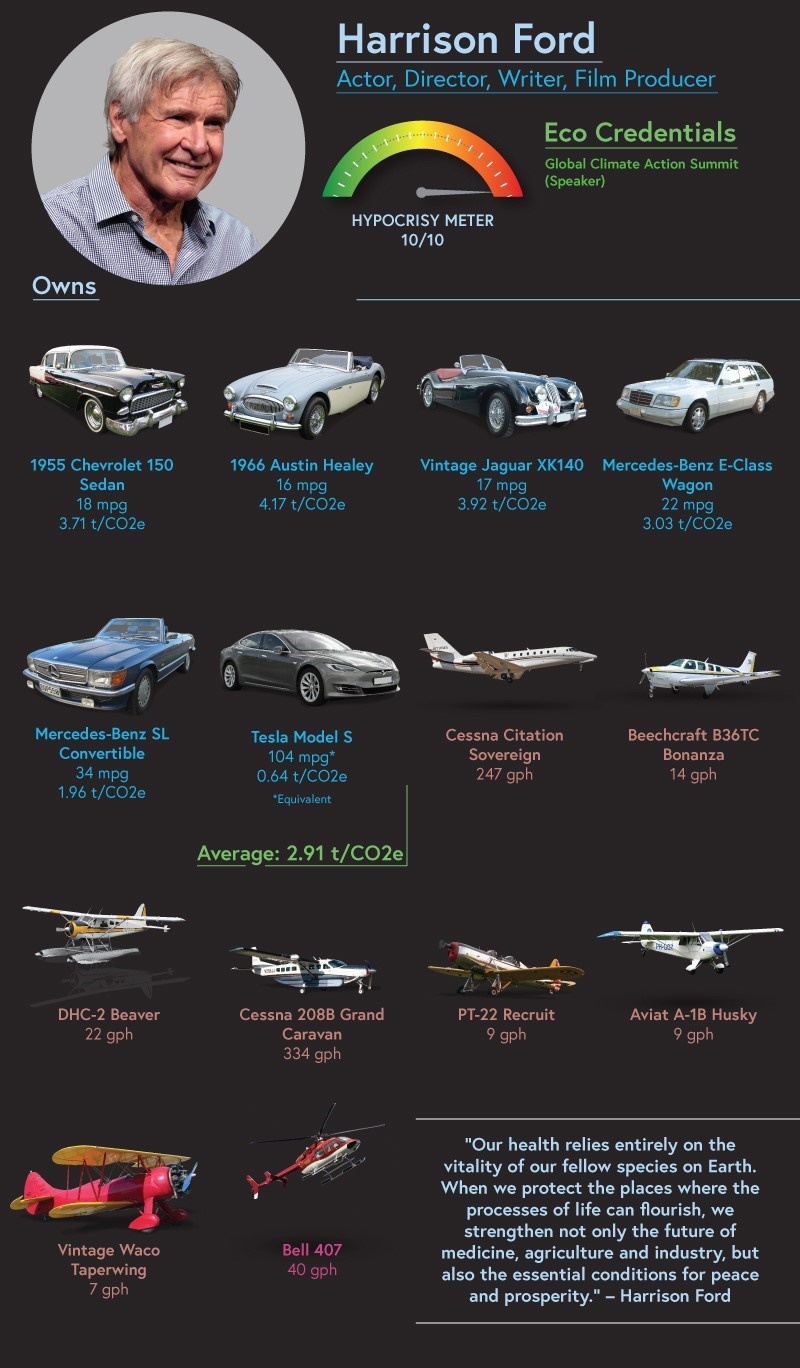 After winning his International Climate Leadership Award in 2009, Arnie told us about his vision to fight climate change by passing a new law while Governor of California that rolled back emissions by 25% and approving a multimillion-dollar solar roof initiative.

Nearly 10 years on, and his average CO2e emissions rating is one of the highest on our list. His most fuel-sapping vehicles include a Bugatti Veyron Vitesse, military-grade Hummer H1 and his Gulfstream III jet. Another keen aviator on our list, John Travolta’s home is famously a functioning airport with 2 active runways for his collection of private jets.

He also has a soft spot for luxury cars, owning the 14mpg Rolls-Royce Phantom and Jaguar XJ6. Rather than reducing his own carbon footprint, some of his solutions to fight climate change is moving to other plants or dome cities. Celebs Who Walk the Walk

But it’s not all bad news when it comes to celebrities and the environment - there are celebrities out there who deserve credit for doing their bit!

Along with being a commercially successful musician, actor, record producer and filmmaker, Jack Johnson is also passionate about the environment.

A UN Environment Goodwill Ambassador for North America and founder of the All At Once, a social action network which promotes sustainable local food and plastic free initiatives, Johnson also became the 50th member of 1% For The Planet.

His 2005 release of In Between Dreams became the first album to carry the 1% label. While he’s touring up coast to coast, his tour buses use sustainable biodiesel and energy efficient lighting to ensure his activities leave behind the smallest carbon footprint possible. A proud vegan, she promoted animal rights throughout the world and only consumes meat-free products. In 2017, she received the Ongoing Commitment Award from the Environmental Media Association (EMA) for her work on promoting environmental progress and innovations.

Portman uses a Toyota Prius as her main mode of transport, proving that she follows her environmentally friendly mantra. A committed environmentalist, the former James Bond actor has been vocal in his objection to environmentally unfriendly projects.

He is also associated with the National Resources Defence Council who successfully campaigned against the US Navy’s use of sonar technology that reportedly harms marine life.

Receiving the Environmental Leadership Award from Green Cross International in 1997, it’s safe to say that he a friend of the environment.

His other positions include Ambassador for UNICEF Ireland, member of the Oceana’s Ocean Council and serves on the Sea Shepherd Conservation Society’s board of advisors. To get around, he drives the luxurious, environmentally friendly BMW Hydrogen 7. Known for her leading roles in many Hollywood blockbusters, Streep is considered by many as the best actress of her generation.

A founder of Mothers and Others, the group aims to provide consumers with valuable knowledge of hazardous chemicals in our food that has become commonplace in the consumer society that we live in today.

In its place, she advocates being a careful consumer and considering how your food is produced. Her eco-friendly car collection boasts a Toyota Prius and a BMW Hydrogen 7. 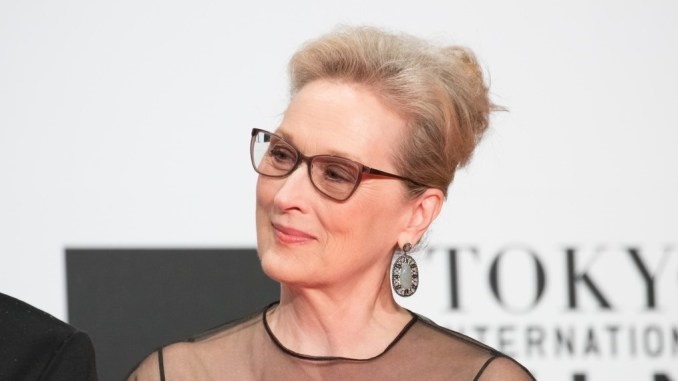