Boeing pilot Anneri Kemp from the Western Cape has thumped her competitors into the sideline in the 2021 Toyota Fortuner Challenge held in Johannesburg earlier this week.

Kemp was paired with Dakar champion Giniel de Villiers, and she won a brand new Toyota Fortuner and equipment, gear, and apparel from Garmin, Salomon, Specialized and Quartz Lubricants. 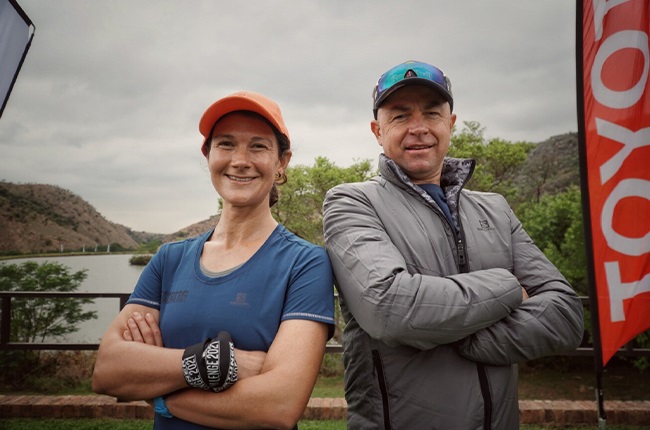 The event kicked off at Kloofzicht Lodge and Spa on the highveld with a random draw to determine the four teams. Giniel and Anneri were the first teams paired up, followed by Shaheen and Steffi, Greg and Zaakirah and finally Justin and Oupa. After a detailed briefing, Toyota laid out six challenges for the participants. The first task, a mountain bike race, required the contestants to saddle up on mountain bikes and tackle a trail ride, while their hero partner would compete on a static simulator with points allocated according to position finished.

Next, a capture the flag game unfolded at a nearby 'pump track', where mathematical dexterity and physical peddling power would converge. The hero-partner would need to solve mathematical riddles from the top of a watchtower and guide their partner to collect numerical flags in a pre-determined sequence.

Following this, the hero and contestant pairs had to command Toyota Fortuners across an off-road obstacle course in the 4x4 Challenge. With the contestants behind the wheel, their hero partner had to guide them from outside the vehicle through a series of 'gates' while stopping to complete a series of puzzles. Anneri Kemp (behind the wheel) and Giniel de Villiers
Motorpress

Returning to Kloofzicht, the fourth task took to the water for a rafting expedition. Using GPS enabled smartwatches, the teams had to navigate to specific coordinates to locate raft-building materials. The end goal was to build a raft that could transport them across the dam to the checkpoint - here, all teams experienced navigational challenges, with the team of Justin and Oupa exploring more of the surrounding terrain than intended.

While Kemp and de Villiers were the only team that managed to assemble a raft, their celebrations were short-lived - as a broken ore and other 'technical difficulties' prevented their water passage. In the end, all teams received a did not finish (DNF) - keeping the scoring tight.

The teams were then tasked with a crossbow shooting battle. Here all teams finished closely, with a victor difficult to pin-point.

The teams then arrived at what they thought was the final challenge for the day; a Ninja Warrior-inspired obstacle course that tested their agility, stamina, mental prowess and grip strength. After completing the obstacles, which included a netted wall and gymnast-like parallel bars, the teams had to pull their Toyota Fortuner in a titanic tug-of-war using only a rope and their body weight. The team of Greg and Zaakirah reached the tug of war first; however, Newton's laws presented a formidable opponent. The muscle-bound pairing of Justin and Oupa demolished the tug-of-war and were the first to tackle the next element of the task; here, an intricate jig-saw puzzle affixed to the bonnet of the Toyota Fortuners made up one component while their teammate had to hoist and suspend a cement bag equal to their body weight using a cable and pulley system.

A 'tag-team' race ensued, as grip strength and stamina were pushed to the max, with the pairs tackling the weight bag and puzzle elements alternatingly. All witnessed screams of anguish, pain, and desperation in the final push to secure the grand prize of a brand-new Toyota Fortuner 2.4 GD-6 RB.

However, one final twist awaited the teams; the Toyota Gaming Engine (TTGE) simulator race, using the Toyota Yaris WRC car and WRC9 game. The four contestants would aim for the fastest time across a specific stage, and this would serve as their last opportunity to add to their points tally.

In the end, Anneri Kemp walked away as the winner of this sixth instalment of the Toyota Fortuner Challenge. She is the first female winner since the competition's inception to walk away with the grand prize of a Toyota Fortuner. Kemp represented Media24, having entered through the Weg! Ry and Sleep magazines. Anneri Kemp (left) and Giniel de Villiers
Motorpress
We live in a world where facts and fiction get blurred
In times of uncertainty you need journalism you can trust. For only R75 per month, you have access to a world of in-depth analyses, investigative journalism, top opinions and a range of features. Journalism strengthens democracy. Invest in the future today.
Subscribe to News24
Next on Wheels24
Watch out, boys! This Cape Town petrolhead shows off her prize-winning Honda Ballade VTEC

Subscribe to newsletters
Lockdown For
DAYS
HRS
MINS
Brought to you by
Voting Booth
Who do you feel was at fault for Verstappen and Hamilton's Italian GP crash?
Please select an option Oops! Something went wrong, please try again later.
Verstappen
25% - 1424 votes
Hamilton
43% - 2418 votes
They were both at fault
32% - 1785 votes
Previous Results
Car Doctor
Why covering your licence plate in online photos could protect you, and your car