• Max Verstappen had a second DNF in Australia, the third race of the season.
• Red Bull boss Christian Horner is furious at the growing gap led by Ferrari.
• Horner says he'd rather fix a fast car than make a reliable one fast.
• For motoring news, go to Wheels24.

Whenever my husband watches an episode of Car S.O.S. on TV., he'd call me and say: 'Come see what they doing for this guy', or 'come see this great restoration job they've done on this car'. He'd be referring to Tim Shaw and Fuzz Townshend, of course. I'd roll my eyes at first, but then I'd make him rewind the entire programme so I could watch it from the start because I get hooked too.

That's the magic of these two, Tim and Fuzz; they draw you in. They are proper petrolheads, but they're a couple of genuine blokes, and no matter what the job is, they're so sincere and passionate about what they do.

We sat down with them recently to chat about Season 10 of Car S.O.S. and find out just a little more about these car nuts.

They've been the show presenters from the get-go, but they're also classic car restorers and mechanics by trade. Wheels24: What has been the most challenging restoration over the seasons for you guys?

Fuzz Townshend:  Well, there have been a number of those, but I will say that the car that caused us the most problems and the most heartache was from this series, from season 10 of Car S.O.S. You don't get to see anywhere near what went on with this car in the episode.

We did a VW Corrado from 1992, which turned out to have had wiring problems for decades. People had hard-wired things in to try and make it work, and then we tried to modify it. When we picked up the car, a guy came over to us and said, "Listen, I've worked on that car. If I were you, I'd rewire that car!" And, of course, I went, "yeah, yeah, whatever".

Tim Shaw: You can't just rewire a car. It's like, wow.

Fuzz: No, it's difficult enough on a really old one. But with a nineties car where you've got kilometers of wiring going on, it gets even more tricky. Anyway, we tried to modify it and couldn't get any of the modifications that we made to work. The electronic control unit wouldn't accept them.

Each time, it would set off something else down the line. All kinds of actions and reactions happened with it. And we'd drive the car for 50 or 100 miles, and it'd be fine. Then we'd give it back to its owner, and it would die within a couple of miles. So, we'd take it back again, do more work on it, and drive it for another 100 miles. Absolutely fine. Give it back again. Dead. For six months, it was chewing and frying. After six months, I was surprised to walk into the workshop and not see it there.

In the car world, you talk about a "turkey." A turkey is a car that you cannot, for whatever reason, work out what's wrong with it. Most people never get a turkey in their whole life. You get a car that has a few issues every now and again. Fuzz and I knew, just by the law of averages, that over 10 years at some stage, we were going to have a turkey. This was it!

W24: Let's speak about the background of how you guys fell in love with cars and what you do. This is probably tied to the first car that you had. So, what were your first cars?

Tim: I was 12 years old. My dad bought me a Beatle Flat-Four Echo 1300 engine at a scrapyard. I was sitting there looking around our Christmas tree. There wasn't much under the tree that year. My dad said "outside," and sitting outside was a knocked-out, rusty engine, which was for me. He knew I was mad about cars. My bedroom walls were plastered with pictures of cars on them.

For me, this turned out, without a doubt, to be the most inspiring piece of equipment and the best gift I've ever been given. It changed my life. I sat outside with my dad and that little Stanley box of tools, such as spanners and screwdrivers. I asked him what everything was, like a carburetor or what does crank mean? That changed my life right there. He knew I was mad about cars.

Later, we got a Morris Thousand, which we drove around in places, like in a field. I learned to drive sitting on a milk crate at about the age of 13. 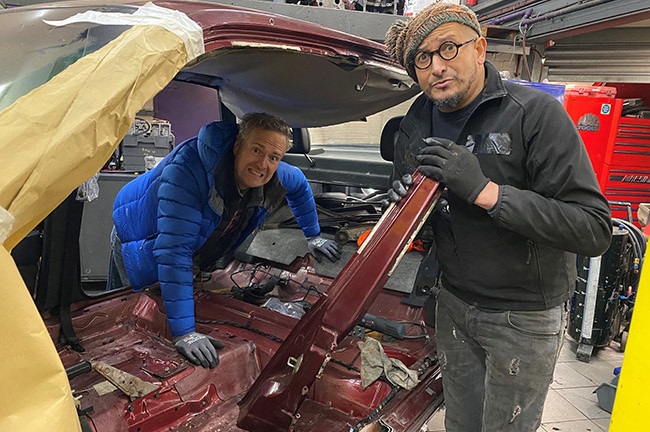 Later, I got a Honda C50 step-through with a little centrifugal clutch and everything.  Having a motor vehicle with gears was even better. When I was 15, I bought my first car for 25 pounds (about R490 by today's estimate), which was a 1964 Anglia.

In fact, I found the logbook for it the other day. I had rose-tinted spectacles and didn't ask much about it. I thought I would just take it away. Then I asked, "Does it run?" And the guy selling it to me just said "no"! So, my first job was to get that thing running, which I did, but it didn't run for very long because I learned the hard way just how bad an engine could get internally. That thing was absolutely blown to pieces!

W24: What were your highlights this season?

Fuzz: There have been many highlights this season. There was a Vauxhall Cavalier turbo 4 by 4 that we did, from the 1990s, not a car that I'm particularly fond of. I got to drive it, and then I could see what the enthusiasts were on about.

This Vauxhall Cavalier turbo was done for a guy who'd had a terrible motorcycle accident, went under a truck, and ended up as tetraplegic. He is unable to move anything below his jawline. The only part of his body he can control is his lower jaw. Getting him back into his car to enjoy taking part in car enthusiasm and going to shows was incredible.

We managed to come up with a way to get him back in his vehicle for the first time in 13 years so that he wasn't just a spectator anymore. He could take part and could go out with his friends. The only thing was that he'd have to let his friends drive him.

I love cars because they stretch back into the past that you can have. You can live in a different era just by sitting in a 1920s car! Fuzz Townshend, Darren Russell, and Tim Shaw posing next to the car with his family and friends. (National Geographic)
Supplied

W24: You guys work on many classic vehicles, and you clearly have a passion for it. Does working on modern cars bring you the same amount of joy, or is it just not the same?

Fuzz: Although you say that. I mean, now we are working on cars from the 1990s - and early 2000s, a lot of the time, and they are becoming classic. But in truth, I would rather be working on something from the dawn of the 20th century through to the 1960s. That's where my enthusiasm is.

Tim: Modern cars are computerised these days. And for us, if you can pop the body on the car and physically take something to pieces with a toolkit or even some pretty fancy tools, you can usually work out what you're looking at and how it works. It's very rewarding to crack the nut and have that penny drop moment. Whereas with a modern car, you get to a little black box, and it's a different set of skills you need. Fuzz Townshend: It's still cool, though. That's just bringing some more disciplines into the world of classic cars. I think that's a great thing.

W24: What have you learnt most throughout the years?

Tim: I'd recommend working on car engines for any young people, anyone out there. The thing about rebuilding an engine is its skills you can transfer throughout life. I'm wearing gloves at the moment and building at the moment, covered in plaster dust because I'm dry lining walls at the moment, and that's right there and then from the age of 12 when I learned to get good with my hands, that changed my life.

Even though we're at the turning point of electric vehicles and hydrogen vehicles and eco fuels and all of that, I would still recommend people try to work on cars. It is an excellent set of skills that you'll learn, and you can transfer these later on in life to anything.

W24: What is it like on set? Are your personalities any different from what we see of you on television?

Tim: We are as we seem. We're great mates. We get on, well, we have our laughs, and that's pretty much it. We don't take life too seriously. We love it. It's the best job on the planet. Neither of us would ever change it. And we're lucky to do what we do and bring smiles to people. And that's ultimately what this is all about.

The lucky thing for Fuzz and me is we get to do a lovely thing for people. We thank National Geographic for backing us and backing the show as it continues to grow. And I don't know what's happening now, but it seems to have hit a new level, like I'm even getting recognized by dogs and insects and things like that, too, haha!

We live in a world where facts and fiction get blurred
In times of uncertainty you need journalism you can trust. For 14 free days, you can have access to a world of in-depth analyses, investigative journalism, top opinions and a range of features. Journalism strengthens democracy. Invest in the future today. Thereafter you will be billed R75 per month. You can cancel anytime and if you cancel within 14 days you won't be billed.
Subscribe to News24
Next on Wheels24
QUIZ | Know Your Car returns to Wheels24 - Game 1