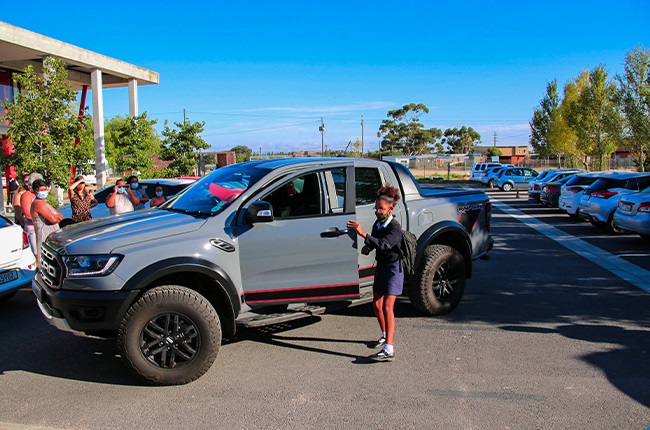 • The 2022 academic school year has started its first full-week of education.

• To ring in the new year, we drove one pupil from Klapmuts Primary from her home to school.

• Her chariot on the 'back2school' run: the Ford Ranger Raptor Special Edition.

Attending school is the most natural thing for some children, but it is a monumental battle for the vast majority of South Africa's children just to get through the school day. And we don't have to look too far to find examples. Our cities are laden with communities struggling to stay afloat, and the subsequent effect it has on scholars will leave you with a throbbing in your throat as you realise just how far removed you are from their realities.

With the 2022 academic year beginning its first full week, many scholars have made their way back to their institutions. Children are ready to tackle the new year, whether at the upper end of scholastic privilege or a community school where some families can't afford the minimum school fees.

However, in some communities, children need a bit of a boost - a motivation, if you will - to steam them on for the challenging year that lies ahead. For this reason, we reached out to one of our resident photographers, Cayne Philander, and presented the idea of taking a pupil from the Klapmuts community to school in our  Ford Ranger Raptor Special Edition test vehicle. Philander, an activist for all things Klapmuts, just outside Franschhoek, immediately contacted the primary school in the small Boland town and asked that they nominate a learner to whom this experience would mean the world.

Klapmuts Primary duly obliged, and soon everything was set to have one Grade 6 pupil's new school year kick off in the best way possible.

On Monday, 24 January, we pulled up at *Stacey's home. We circled the street a few times looking for the right house, a task not made easier by the absence of numbers. All the while, community members saw the bulky Raptor patrolling their street, and some even stood in their doorways, gesturing if they could help us find who we were looking for.

Attempting another rotation, we notice the star pupil peeking out from their front gate. "Are you the girl we are giving a lift to school today?" we ask, as the shy eyes nod 'yes' from behind her little mask. Following quick introductions with one of her family members, we got in the bakkie and headed for the school. She was quiet throughout the three-minute drive - perhaps understandable being in a vehicle with strangers.

READ: Audi's new R8 Spyder instils a sense of aspiration: this is what dreams are made of

"So, what do you want to be when you're all grown up one day?" I asked Stacey as she quietly looked through the window with extra big eyes at her teachers waiting for her at the school building's entrance. "A doctor," she says as she turns her face towards me and back at the audience in front of her. Having been informed of her background and numerous difficulties, being a doctor is the noblest of occupations for her. She's had her fair share of medical challenges and has had to adapt her life to her new normal. It's understandable, then, why she has this vision for herself.

Apart from the medical trials, she must also contend with the socio-economic battles rampaging through Klapmuts. The situation at home is not ideal, and are they affected by the challenges posed to most of the community, but the family makes do with what they have.

Acting principal of Klapmuts Primary, Mervin Ranna, says: "This girl's situation is typical of the Klapmuts area. Her aunt became her legal guardian after her mother's death. I just don't know the true extent of their domestic situation, but the staff spoke with one voice when we asked which pupil should be on the receiving end of this experience." Following all the formalities and our 'guest of honour' having made her way into the school, we offer Ranna and one staffer the opportunity to experience the Ranger Raptor SE in all its glory. Philander, tagging along, guides us out of town and onto one of the many gravel roads surrounding Klapmuts. The two educators are pretty impressed with how comfortable and secure the Raptor feels on the road, but their nods of approval soon turned into full-scale laughter.

WATCH: Now this is a bakkie! Living with the Ford Ranger SE and unearthing its quirks

With the bakkie's drivetrain in 2-High, traction control deactivated, and BAJA mode engaged, the Ranger Raptor SE put up quite the show for the two passengers and Philander. Ranna, impressed by the bakkie's impeccable mannerisms on the loose road surface, likened the situation to "what Giniel de Villiers must experience at the Dakar!" Of course, every action had to be executed in a controlled manner, just to give the occupants a taste of what the bakkie can do and how it reacts to these kinds of conditions.

Heading back, Ranna says he is pleased that their student could have had her horizons broadened. "Our community is taking strain with all the challenges plaguing it," he says. "But if we can empower one young mind to embrace their ideals and reach their goals and own that dream car, then we would have won big."

*Stacey is not the young girl's real name, and we have refrained from revealing too much personal information about her due to her circumstances. If you would like to reach out and assist in any way to make this hard-working pupil's life a bit easier, please contact the Wheels24 team here. 2022 Ford Ranger Raptor Special Edition
Wheels24 Cayne Philander | Eighty Photography
We live in a world where facts and fiction get blurred
In times of uncertainty you need journalism you can trust. For 14 free days, you can have access to a world of in-depth analyses, investigative journalism, top opinions and a range of features. Journalism strengthens democracy. Invest in the future today. Thereafter you will be billed R75 per month. You can cancel anytime and if you cancel within 14 days you won't be billed.
Subscribe to News24
Next on Wheels24
INTERVIEW | Top Gear trio bring the laughs and share what it was like to shoot season 32