'Oupa, watch out!' - The day Granddad trampled me under his Chevrolet El Camino I don’t suppose it’s something a child ever wants to go through: having a parent or grandparent drive over you with their car. Or bakkie, in my case.

That day still haunts me, but through a wretched sense of humour and a poor ability to word my feelings, I have come to make peace with the fact that I almost died.

I was in primary school, around grade 3 when my life would (almost) be altered forever. I had just received my first bicycle the Christmas before and I was ecstatic to ride it wherever and whenever I could. I still recall it so vividly: a blue and white Shimano, 10-speed. Back then, it was all about how many ‘speeds’ your bike had.

Living in the countryside, there was no shortage of roads. Whether it was in the street, riding it to school or Sunday school, or just exploring the gravel roads on the outskirts of town, my bike knew no ends. 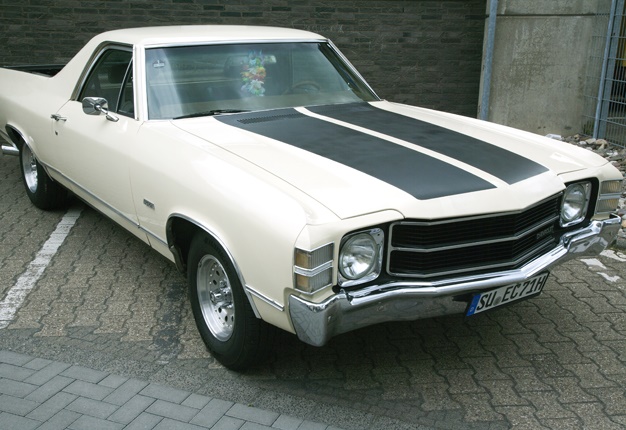 As a cyclist, you must share the road with other road users, cars and bakkies, to be precise. And then you’d find yourself at a stop sign, mimicking the sound of an indicator. "Tick tock, tick tock, tick tock," and then riding off when it’s your turn. Ah, the innocence of youth and the carefree lifestyle of the countryside. It all bodes well for a child’s spirits. And because it was always the second-coming of China, everyone knew to be on the lookout for cyclists.

Everyone except my grandfather, it seemed. I love my Oupa to bits, but on this day I didn’t know whether he loved me back.

Just before Oupa pulled his brawny Chevrolet El Camino out of the garage, I got my bike and both of us dotted down the driveway. Me before him. And because I took on the characteristics of a real-life driver, I paused in the driveway and proceeded with my verbal “tick tock, tick tock” indicator as a real car would. In front of me, a man who served on the church council with my Oupa pulled up at the neighbour’s house. I assumed he’s here for my Oupa. Behind me, Oupa is reversing, and all I can remember thinking was that he will probably see me. But he didn’t.

Oupa had his right arm resting on the driver’s door window sill, his head peaking out and looking rearward, and the cigarette resting between the fingers on his right hand. I saw that, but I didn’t move. I froze, looked forward again, and my “tick tocks” became even louder! God help me, because suddenly all I saw was darkness. Starting with the back wheel, the El Camino began eating into my bicycle. I didn’t know whether to scream or shout, but I could feel the bike buckling underneath me. Suddenly I hit the ground, but everything happened in slow motion. My body would react to each action the bike would make, forcing me underneath the El Camino.

And that bakkie was loud! A 4.1-litre straight-six engine burbling towards me and the heat of the exhaust brushing over tender legs. And then, as if wondering why on earth exiting the driveway is taking a bit longer than usual, my granddad revved the bakkie to gain a bit of momentum. All the while I’m stuck, my hearth throbbing in my throat, still not able to fully put an escape plan into action.

Then I heard it: the bitter-sweet sound of my mother’s screeching voice running towards the bakkie. I couldn’t see her face, but I saw her feet coming towards me. Suddenly there were more people standing in the driveway. The man who I gave ‘right of way’ to also hopped closer, my grandmother’s friend came running from her house just a few numbers down. My grandfather climbed out of his idling bakkie and reached out his (then) strong arms and pulled me and my bicycle out in one swift motion.

I felt safe. I thought he was going to hug me, but he gave me to my shock-ridden mother and asked: “Wat soek jy onder die bakkie?” (What are you doing under the bakkie?). At least he smiled and rubbed my head endearingly. I'm sure he got a bigger freight than me.

My poor Shimano was never the same after that incident. Whenever I rode it, it had a slight limp – bearing the scars of war. Both my bicycle and I lived to see another day, but my cycling days came to a gradual end after that.

And it’s ironic, really, that I find myself in an occupation dealing with the thing that tried to kill me in grade 3. DISCLAIMER: All images are sourced from Getty Images and are that of the American Chevrolet El Camino.

We live in a world where facts and fiction get blurred
In times of uncertainty you need journalism you can trust. For 14 free days, you can have access to a world of in-depth analyses, investigative journalism, top opinions and a range of features. Journalism strengthens democracy. Invest in the future today. Thereafter you will be billed R75 per month. You can cancel anytime and if you cancel within 14 days you won't be billed.
Subscribe to News24
Related Links
PICS: From father to son - Rare Jaguar E-Type, awesome F-Type, one epic reunion in Cape Town
Here's how this veteran petrolhead became a Ford fan
Next on Wheels24
Ford's CEO Jim Farley loves cars so much, he launched a podcast called Drive