Nawaal Rajah always had a ‘thing’ for cars, but it was never truly a passion as much as it was just an interest.

But things changed for the 38-year-old when she married her husband, who was a petrolhead through and through.

Having had a Volkswagen Golf GTI as her daily commute, Nawaal always enjoyed the effortlessness of driving South Africa’s favourite hot hatch. It was her car and there was no way that she’ll ever part with it. Never say never, because she had to part with her beloved GTI and in its place came a 2014 Range Rover Evoque.

Though it was a sad moment saying goodbye to the car that brought her so many happy miles, Nawaal soon found that the Evoque does have its own strengths and curb appeal. Yet, something was amiss and she turned to Razor Customs to transform her new set of wheels into something special. Nawaal's Evoque after it first came from Razor Customs some six months ago. Image: Miguel Arends

When Nawaal first took ownership of the Evoque, she almost immediately asked her husband to make it a tad more special. Not that there was anything wrong with it, but to her it was ‘just lines’ and she wanted more than that. And so began a six-month long project to fit the Evoque with its own customised body kit.

Razor Customs was tasked with the monumental project of transforming the Evoque. When she first saw it after the initial work was carried out, the artwork didn’t speak to her and, of course, she turned back to the workshop.

"When they did the reveal, I was pleasantly surprised," says Nawaal. "I didn’t want to sound ungrateful so I went with the lines on the car. But a couple of months after driving the SUV I asked them again if we can’t do a bit more graphic work on it."

The graphics would be the final touch to give Nawaal’s Evoque that unique touch - that dash of individualism - and she believes that the product now has the edge she was looking for. For the mom of three, the Evoque went from a mommy’s van to a bad-ass SUV. Going by its official name of the ‘Razor Evoque’, Nawaal got the SUV at the end of September 2019 following the final spray job. The Evoque had to be ready for an event that fell on the last weekend of the month, but it was very close and the car would not have been ready for the deadline. But Razor Customs, along with industry players such as Acom, Dent Expert, and Xmods, readied the paintwork in less than 36 hours to transform the Evoque into the ‘bad ass’ it became.

It was no easy task, but the union got the job done and readied the Evoque for its first, official public showing.

But for Nawaal, the Evoque needs to speak to a greater audience than just car fanatics. The Razor Evoque must inspire something in women, especially, to want to express themselves. When onlookers see the SUV, she wants to ignite the same desire in other women to transform their own set of wheels into something more meaningful. And in Nawaal’s case, the wolf on the side of the SUV speaks of that like an alter ego.

She says: "A wolf’s got an enchanting aspect to it. If you think wolf, there’s always caution about it and you don’t look at it as being a meek and mild animal. But at the same time there’s a dangerous aspect and I find that appealing.”

Speaking on her experience and seeing the process unfold, Nawaal notes that she was pleasantly surprised to see just how equipped and capable South Africans are when it comes to customising a car. And, undertaking her own project opened her eyes just so much more.

She adds: “With Razor Customs, I think they’ve opened the market to a number of people. Because when you initially think of modifying a car or just doing aesthetic upgrades you think it’s expensive, but it’s actually not. You can have it done affordably and there are a number of companies in the market that are capable of doing an excellent job; they just don’t get the recognition.

"But these guys are showing that there is more to South Africa than meets the eye. You don’t have to import everything and we (RSA) can produce work of equal - if not better - standard to the international market." 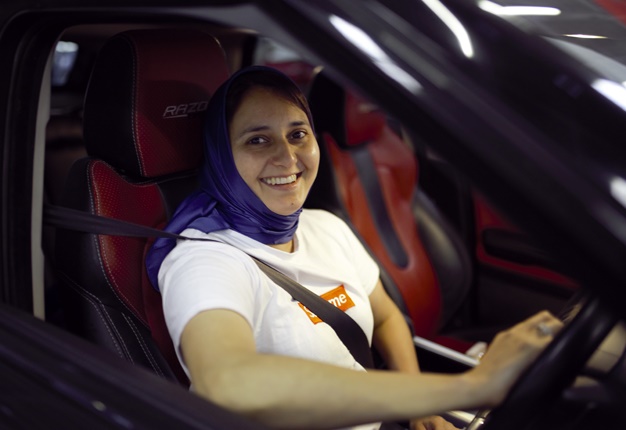 We live in a world where facts and fiction get blurred
In times of uncertainty you need journalism you can trust. For only R75 per month, you have access to a world of in-depth analyses, investigative journalism, top opinions and a range of features. Journalism strengthens democracy. Invest in the future today.
Subscribe to News24
Related Links
WATCH: Landy's next-gen luxury urban SUV - stylish new Range Rover Evoque in SA
Euro NCAP ratings: New SA-bound Range Rover Evoque scores full marks for passenger safety
Next on Wheels24
RoadTrip | Chasing the West Coast breeze in Suzuki's new Vitara Brezza