• A woman was filmed driving her car with a baby seat on the roof.

• The 'mother' and those pursuing her are known for their pranks that are published on social media.

• Experts raise concerns that such videos are dangerous to all road users.

An alarming video has surfaced on the internet of a woman driving her car whilst her baby's car seat is on the roof.

The video, posted on the Facebook page Jibrizy, starts with a woman filming the incident and trying to wave the woman in question down. "Hey, hey! You have a baby on your car," she shouts as she tries to get the woman's attention. This prompts the viewer to believe, at first glance, that there is indeed a baby in the seat.

The three-minute video shows how several road users, whether on foot or in an automobile, try to alert the woman of her baby. Still, she ignores everyone and continues driving while on her cellphone.

The pursuing duo eventually gets her attention, and they inform her about the baby. When she exits the car, she nonchalantly 'thanks' them for their effort and wishes them a good day - sarcastically.

This 'joke' is not a joke

After watching the video, eagle-eyed viewers would have noticed that several aspects of the video are amiss. For one, how on earth did the baby seat stay intact for so long? And what mother would place her kid on the car's roof or drive off without instinctively making sure that said child is securely fastened, in their car seat, inside the car?

The 'mother' and the chasing duo are renowned for elaborate hoaxes and duping people. This time, though, the American trio went a bit far as they execute their plan. It's not uncommon for 'public figures' to go to extreme lengths in a bid to create a video that'll garner millions of views, but logic failed to prevail in this case.

Whether the three 'actors' want to admit it or not, they could have caused an accident, or worse.

WATCH: Volvo uses its XC60 to show why babies should be in rear-facing child seats

Elizabeth Mamacos, Parent24 editor, adds: "This is irresponsible! People should not go to such lengths to get attention, and for onlookers who don't know it's a 'joke' it can be very traumatic - not to mention how dangerous to others, as many people would risk their own lives to save the 'baby'. These jokers are risking the lives of others. No one should ever use a baby, even a fake one, for a hoax or to get a laugh." 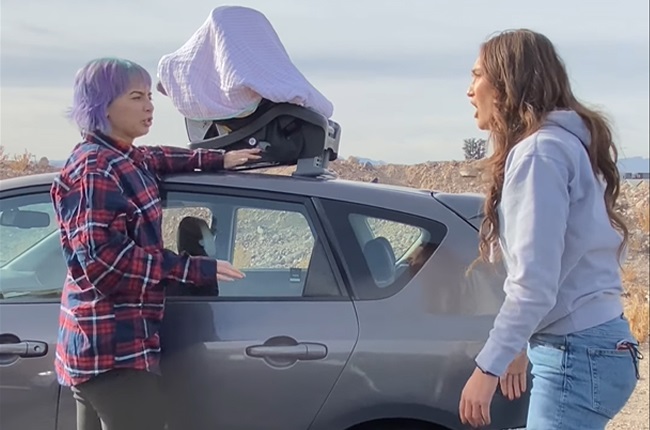 Arrive Alive's Johan Jonck shares his expert view on the video but warns that such actions could have dire consequences.

He says: "We do not have more info on the incident, and unfortunately it is true that thoughtless and 'idiotic' behaviour does occur on our roads. The safest place for a baby is in a rear-facing car seat inside the vehicle. And if there is indeed a baby on top of this car, it is extremely dangerous as there will be zero protection in a rollover.

READ: This celebrity baby has a R133 000 Rolls-Royce car seat - is it any safer than the norm?

Arrive Alive published several tips on the correct use of baby seats. The road safety body lists the following:

- reduce the risk of contact with the interior of the vehicle or reduce the severity of injuries if this occurs;

- distribute the forces of a crash over the strongest parts of the human body;

- prevent the occupant from being ejected from the vehicle in an impact;

- prevent injury to other occupants (for example in a frontal crash, unbelted rear-seated passengers can be catapulted forward and hit other occupants). Pranksters dupe onlookers into believing there's a baby on a car's roof
Facebook Jibrizy
We live in a world where facts and fiction get blurred
In times of uncertainty you need journalism you can trust. For 14 free days, you can have access to a world of in-depth analyses, investigative journalism, top opinions and a range of features. Journalism strengthens democracy. Invest in the future today. Thereafter you will be billed R75 per month. You can cancel anytime and if you cancel within 14 days you won't be billed.
Subscribe to News24
Related Links
WATCH | Volvo uses its XC60 to show why babies should be in rear-facing child seats
This celebrity baby has a R133 000 Rolls-Royce car seat - is it any safer than the norm?
WATCH | Can a baby seat fit in a Ford Mustang Convertible?
Next on Wheels24
SEE | Volkswagen wants SA customers to experience its hot new Taigo lifestyle SUV ahead of launch